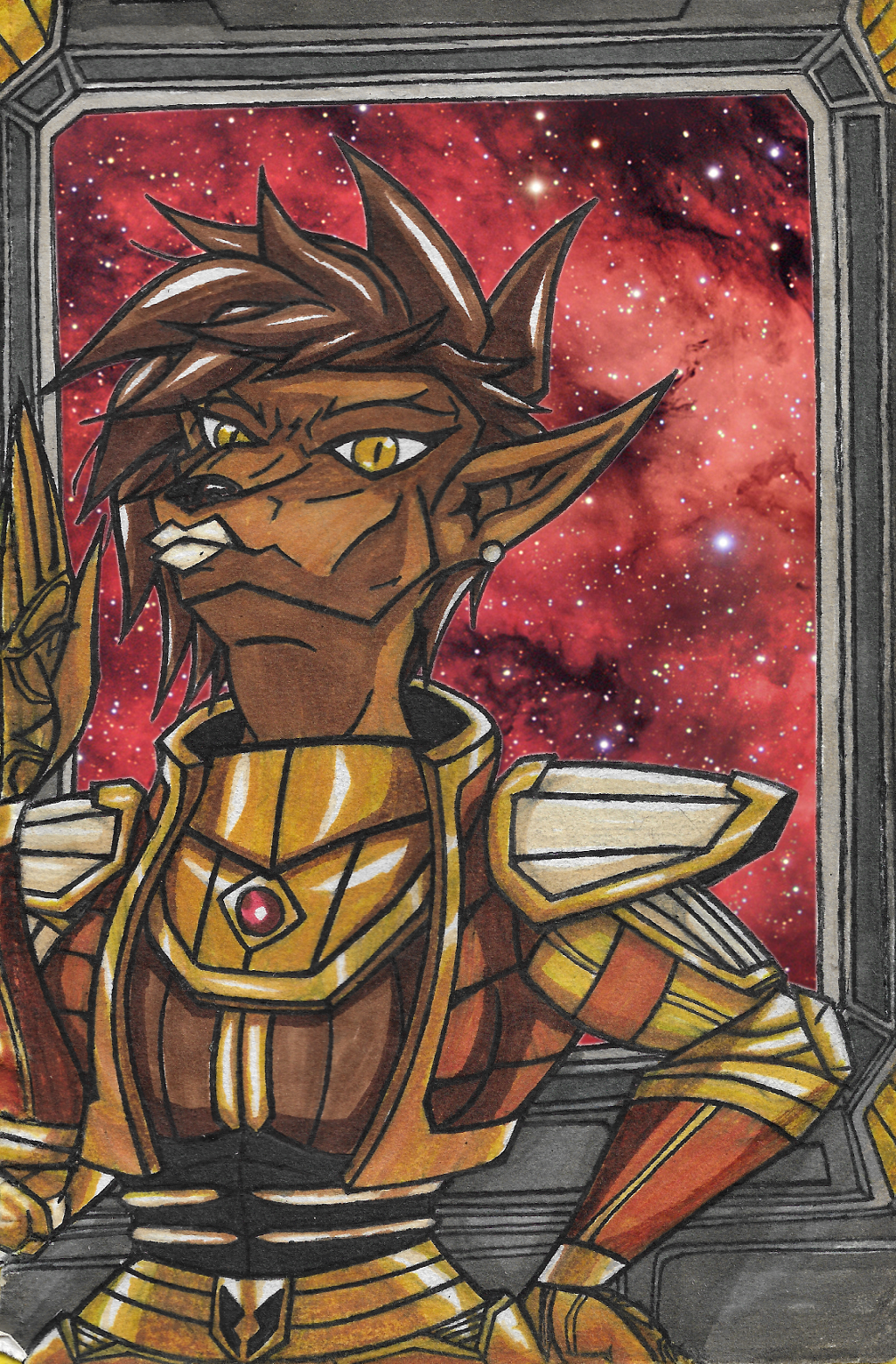 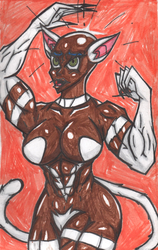 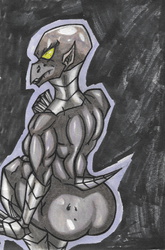 I finally finished her, the updated design of my bothan female character from wayyy back! https://www.deviantart.com/the-argonian-guy/art/Bothan-Girl-Sketch-722331938 There's also that other one that I made of her which lacked hair https://www.weasyl.com/~theargonianguy/submissions/1808768/bothan-girl Now she once more has that hairdo similar to nanashi from smt iv apocalypse, except I made her hair much fully and thicker now, and her face is much broader, while still remaining very sharp and angular. Since I am not very good at drawing a star-field background by hand with markers yet, I decided to go the gimp editing magic route, and have gotten my taste of future sprite editing and creation techniques that I am probably going to use when I start doing that type of stuff. I wanted to see if I colud do more complex backgrounds oppose to just the simpler abstract backgrounds I use to draw, in this case at the window of a sci-fi space vessel which seems to be this young woman's favorite spot to hang out on in these drawings! XD I hope I didn't made that window to crooked now!

I do feel like I might need to make some minor tweaks to her colour scheme, mainly in her mini jacket armour which was intended to have a sort of orangish colour, and her gauntlets which I think I should have left gold similar to her design in this art trade that I had with another artist https://www.deviantart.com/plavigmaz/art/Bothan-757190647 So I might have to redraw her next time and make the necessary changes. I just don't want those parts to look too much like leather, which is not the material of those parts of her armour, as that would make no sense for sci-fi armours for a lot of common sense based reasons, it makes more sense for those parts to be made out of some likely textile based sci-fi futuristic material that is much stronger and superior to kevlar, carbon-nanotubes which are superior to kevlar astronomicaly, and even superior to carbyne the strongest material we can make in real-life with our current level of science and technology today, and is just one of many super strong sci-fi materials from her setting, ideally used for soft and flexible body armours albeit it's very likely going to contain some plating and padding. I also want to add some metal plating to the gauntlets. Again I'll most likely do that next time.

As what the character is like, this is just going to be some notes of what I was thinking, maybe not every thing, but I'm just going to keep it quick, short and simple and just state that she is a straight up Taurus! One who is strong of mind, and hard headed, with lots of pragmatism and perseverance, again Taurus all the way! Also she is not the biggest of fan of being told what to do, especially if those people are females, because wamyn XD, and wamyn on wamyn hostility is bound to happen when you have two estrogen fuled vages competing with each other for dominance, it eventually winds up devolving into bad news! XD I'll probably get more in-depth with the psychology of the fictional character next-time, but for now I feel like I'm ready to wrap this up. As for her background I prefer to keep that completely ambiguous, and so does bothan girl herself, In-fact if you asked her anything about that she'll most likely give you a subtle non of you're business response with her mastery of double-speakese and trolling! XD Kinda a way she can answer you're questions without really answering anything! I mean not it's like she knows you after all! ;) I'll probably get more in-depth with some of the concepts that I was thinking in regards to this character, this is all just a mere sneak peak, because again I want wrap things up right now, before this becomes a mass ramble! XD

Oh yeah btw she has three friends, one a Zabrak kid with very nice looking long hair, an edgy nerdy looking Kaleesh boy, and finally a shit for brained Tegruta boy, I'll talk about them next time! :)

All in all I am just glad I finished something that I have been procrastinating on for a while since I put a lot of care into my colours!