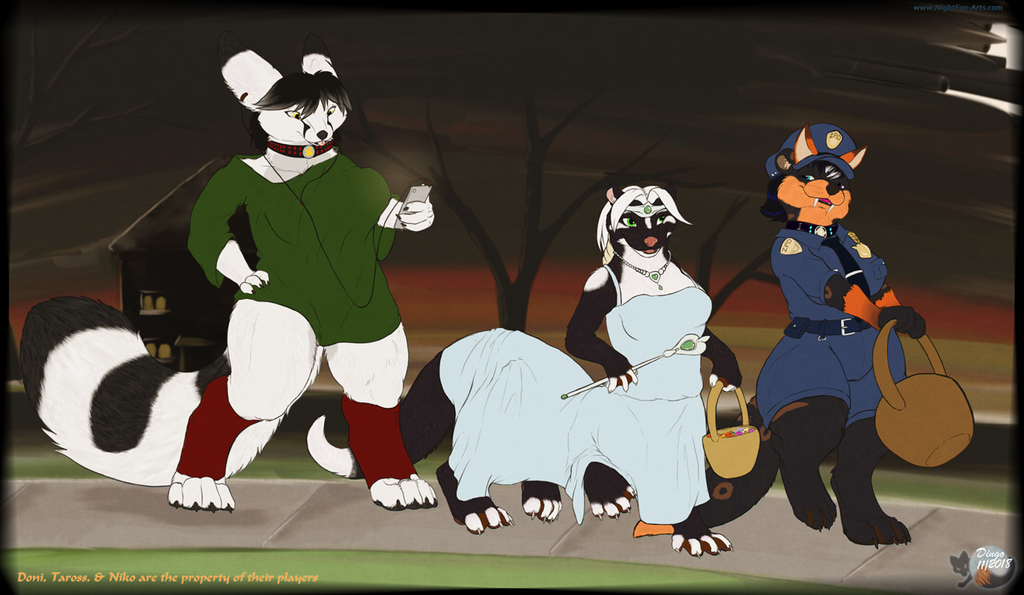 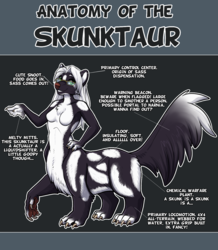 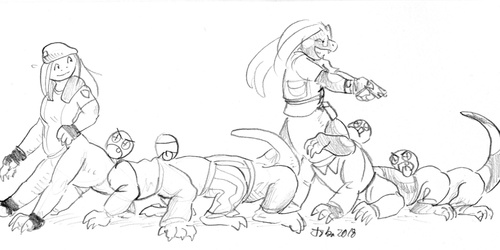 Niko stepped into the lounge with an exasperated sigh before dropping the shopping bag -which made a single lonely tink- and flopping belly-first onto the couch. "Today can be over now, right?" shi mumbled into the sofa cushions.
Doni hemmed a moment, settling down next to the smaller figure of the sabertoothed (night)otter and pulled Niko forwards a bit, resting the formers head on the latter lap "What's the matter?"
Niko rolled over dramatically. Perhaps a bit more dramatic than hir normal demeanor but it also gave a small opportunity to wiggle hirself a little more into hir mates lap "I just spent the last ~hour~ trying to get some supplies for the weekend." shi started "I couldn't reach any of the good stuff, and every time I had to ask for assistance the first thing they asked is if my parents knew I was in a liquor store..."
There was a small giggle from the mistle, followed by a quick little pat to an otterbelly "Granted, dear, you ARE just about as tall as Lani about a year or so ago and it IS a little hard to tell a cute little otters age until you get a good look at them." Niko rolled hir eyes in response, squirming a bit.

"You know... I've been thinking about that..." another voice chimed in, and Taross' black and white furred head popped up over the back of the couch. "Considering which day it IS today... and our current size and looks for the season..."
Both Doni and Niko looked puzzled when Taross -in the guise of an otter-taur hirself- bounded out from behind the furniture again and into the hallway outside the lounge "I had this thought after the others went to take the kids out Trick or Treating. Just give me a moment."

A few seconds later shi re-emerged into the room, pushing a box that was nearly as tall as shi was. There was some lettering on the side, it read 'H.W. 2016' and it made some feint jingly noises when pushed against. "How about we take a little advantage of the occasion and have a little fun tonight." Taross eventually continued, rearing up and resting hir forepaws on the top of the box, tapping at it with a grin.

"I still don't think it's fair you got the bigger basket." Taross commented to Niko as the trio made their way along the sidewalk, moving over to the next adress in the street. "I need to eat more than you, you know."
"Maybe." Niko retorted "But ~you~ are the dainty princess and I am the strong and dashing police officer. It wouldn't do for you to drag such a big thing around."
"Plus you need it to hide your bigger rack." Doni injected from a few feet behind.

Taross snerked softly and poked at Niko again "I still can't believe you took Lune's old Nick costume. I mean..."
Niko cut hir off and grinned "What? I can't pretend to be a fox then? Besides, the uniform shorts help my disguise."
"You ARE a fox... pretending to be an otter pretending to be a fox." Taross returned and then paused "But true... you can't just drape something over your backside as easily. But we'll have to remember to avoid porches with those bright LED lights, last one almost noticed I wasn't just wearing a padded-out dress."

"Yes, do be careful." Doni added again "You both offered me ten percent tithe if I'd come along to pretend to be your chaperone... I expect a good pile of candy for myself once this is over."

A closing-off picture for the month of Ott-ober, which naturally ended with Halloween.
Taking some advantage of the often child-like appearance and demeanor of otters, as well as their currently diminished heights, Taross and Niko have pulled on some old costumes of their kids and decided to go out trick-or-treating. It IS a good night for such mischief after all, and in the end it IS the best trick they could treat the unsuspecting people answering the doors to, no?
To complete the illusion, Doni had agreed to be their 'adult supervision' but not before haggling hirself into a cut of the nights' take.

Still... Perhaps Niko should loosen hir belt just a little. Those hips are hard to lie with, even if shi can hide hir chest behind the basket for candy.