A Rotten Apple (by Merlin) by tapewolf 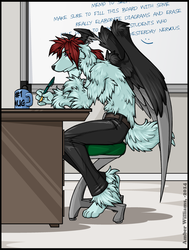 A Rotten Apple (by Merlin)

This is another script I contributed for Merlin's April Fool Week, which lampoons some of the more peculiar Jack Chick comics.
I always wanted to have a religious fanatic describe an apple or piece of mouldy cheese as being in league with with Evil One and going on a total bender over it, but I never really had a chance to use that idea until now.

In the universe of Merlin's comic, Tricksters, who worship Jake (the God of Lies), are persecuted and generally put to death if found by worshippers of most of the other gods. Traipses, (usually centaurs) tend to act as travelling merchants and follow the God of Travel (and death), who doesn't have a problem with Jake or his servants. However, this can lead to people believing they are in league with the Tricksters.

FWIW I totally made up the baby-stealing myth, but it appears to have become a myth in the canon comic as well.