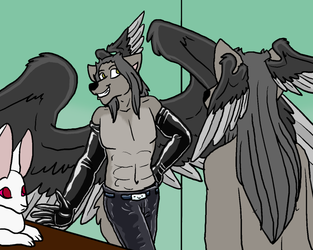 Here's a blow-up from page 19-06 of my comic, The Epsilon Project. Here we see Daryil posing with his twin daughters, with their mother on the right.
As per the prologue, the incubus Lord Daryil has embarked on a plan to ascend into a higher life-form, but the price he pays is losing the ability to reproduce. As such, he strikes a deal with an ordinary mortal Being to act as a surrogate mother prior to his ascension attempt. In exchange, Lisa will be made very wealthy and also converted into a succubus, giving her centuries of youth.

25 years later, he has two succubus daughters, Jezebel (L) and Lilith (M) who share his dress sense. Lisa (right hand panel) is now a succubus as promised, but has not taken to it quite as readily as her daughters. Once she begins wearing rubber and PVC, we'll know that she's probably come to terms with it.

The original page, with captions can be found here:
http://projectfuturecomic.com/epsilon.php?strip=19-06
http://www.furaffinity.net/view/26200390