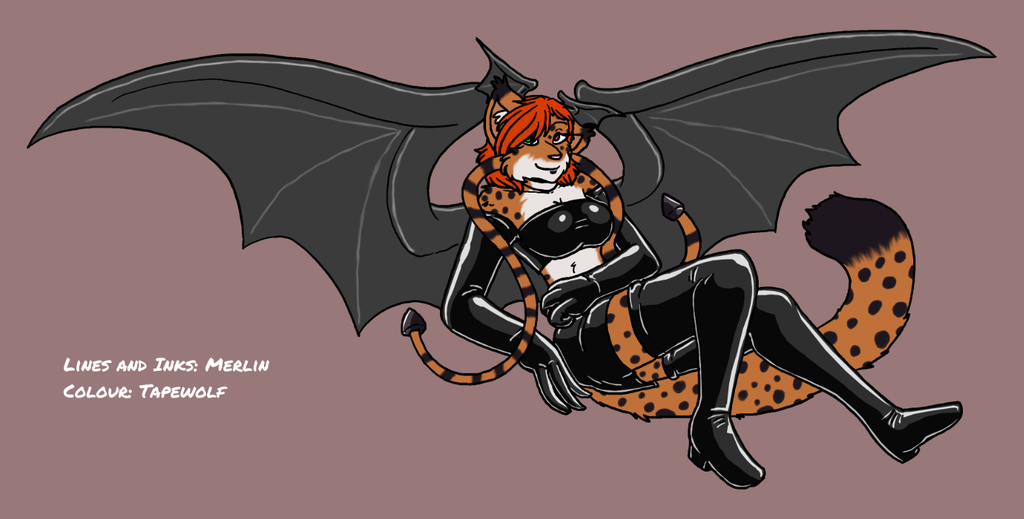 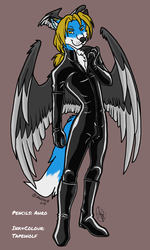 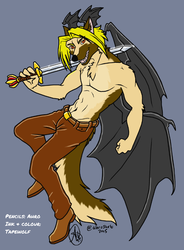 EDIT: The eyes were supposed to be heterochromic. Fixed now.

This is another of

's characters. A seductress succubus, she has been known to follow in Cass' footsteps of breaking into a Being's bedroom late at night, seducing them and pretending to devour their souls so that she can feed upon their lust and terror. So here she is, dressed to kill.

Tomara didn't quite manage to carry out the plan correctly, and it went horribly wrong as her target died of fright. Daryil stepped in and was able to protect her from execution, with his influence and a large amount of compensation. To repay her debt to the clan, she was partnered with Ben Buran, a Being who wanted to become an incubus - the conversion process requiring her to bear his child and surrender half of her life force to him.

Following his conversion, Ben now attends Illiath's School for Iincubi and Succubi along with their son, Michael. Both of them appear in my Epsilon Project comic. Tomara has hopefully learned her lesson now.

The picture was drawn by Merlin and has been inked and coloured by me. As with Catsuit Ben it was intended as a present for CubiKitsune - some confusion occurred and Merlin instead drew Tomara in something that was close to but not quite a catsuit. Then Ahro opened for sketches so I got her to do Catsuit Ben instead and he ended up with two presents. Lucky fox!

Tomara is a Coeurl - I can't remember quite where he borrowed it from, but whoever it was stole it directly from A. E. Van Vogt's "The Black Destroyer" (1939). Probably classed as some form of mythos in the DMFA universe. She has stinging tentacles on her face, the tips of which are usually covered to avoid accidents. Whether she would normally feed on phosphorus I couldn't rightly say, but as a succubus she feeds on emotions now.

If I remember correctly, her clan marking is on one of her buttocks, and hence not visible in this picture.