Jake, God of Lies (and stuff) by tapewolf 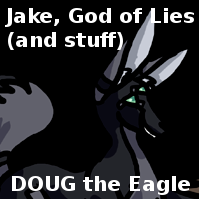 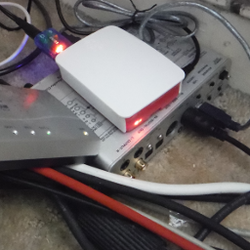 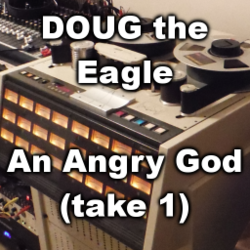 Jake, God of Lies (and stuff)

This is a song from my upcoming album, "Evil Songs for Evil People". It was the last song to be written, though it has its roots in a song I started about 5 years ago, hence it was known as '227' for quite a while.

I was in the awkward position that the song which acted as a base was obvious written to go with some lyrics but I had forgotten them and not written them into the MIDI file which the composition was filed away as. Once the composition was finished I was left with a 12.5 minute song but no words. Then I found myself saying "I am the God of Lies" after the verse, and the whole thing clicked into place. Lyrics were quickly written, based around Jake, the Trickster God from Merlin's comics, which can be found here: http://www.dhscomix.com - I'd start with "Way Back Home" or "Daisy/Peony" to begin with. (The icon was nicked from 'Way Back Home', sorry Merlin!)

I was also listening to Theo's "Game of Oroborous" album a lot while this was being written, hence the pipe organ segments.

The songs was recorded on an Otari MX80 24-track tape machine, with the bass and vocals being recorded on a TASCAM TSR-8 for its automatic punch-in capabilities and then dubbed onto the 2" machine afterwards.
Mixing was done onto a Studer A807 1/4" master recorder, in three sections which were then razorblade edited together for the final album version.
Some of the vocals were slowed down by running the TSR-8 fast during tracking.

The reverse reverb was added in the traditional manner, by flipping the tape upside-down and dubbing reverb onto a spare track. I even made a video of that, but I keep forgetting to upload it.

Cabbages and oranges give power to my ever-faithful minions
My faithful minions
Confusion and illusion aren't strong enough to change my foes' opinions
Their fixed opinions
Feathers, leaves and faith are all you need to make forbidden magic work
As gods go, I'm a jerk

If you dare then take a care since worshipping me brings you persecution
Such persecution
If you're caught the trial's short and tends to end with public execution
Grim execution
They might kill my followers but some they'll never recognise
I am the God of Lies.

What you've done strikes me as fun so I'll reward you in my usual manner
My charming manner
I'll change your ears, astound your peers, a curse that's not a curse, it's more a banner
A noble banner
Through your pranks you risk your life to worship me... I guess that's kind of odd
I am the Trickster God