Heads You Lose - Jakob goes to the guillotine by tapewolf 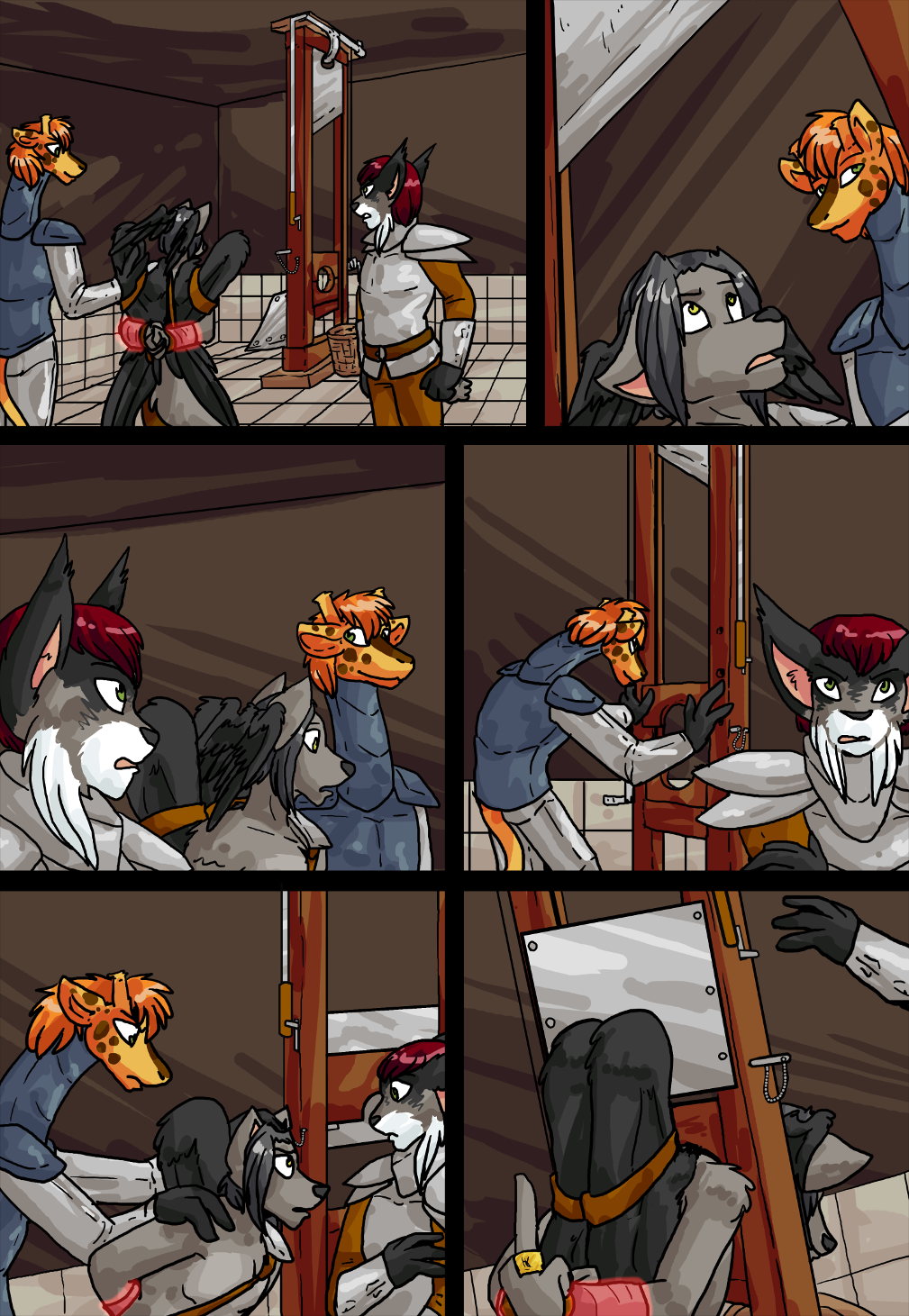 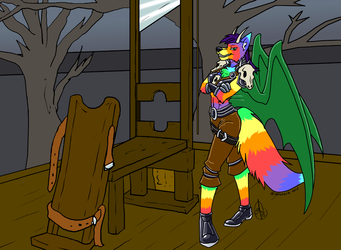 Heads You Lose - Jakob goes to the guillotine

This is another detail from Heads You Lose, rather less graphic than the previous page ( https://www.weasyl.com/submission/1117912/heads-you-lose-jakob-s-guilt-trip-horror ) but not particularly nice either.
As mentioned previously, Heads You Lose was conceived as a look at the dark side of the adventuring trade in DMFA, aka "If it's got wings, murder it" and as such as a higher body count than any other story I've written. It's ended up perhaps even more morbid than I'd originally conceived owing to various real life pressures - as I said, if you want to ascribe the bleak outlook to Creator Breakdown, feel free.

The captioned version is here: http://projectfuturecomic.com/heads.php?strip=06-09

Jakob: "Nice design, but why is it indoors?"
Crake: "So we can plumb it into the toilets next door. A drain for the blood, a tap for water, makes it so much easier to wash down!"
Jakob: "That explains the tiled floor and the slight slope."

As also mentioned previously, the pages for the execution scenes in chapter 6 are very much a joint effort with Merlin. She drew and coloured it, and then I drove myself insane studying the guillotine in minute detail, realising it wouldn't work and trying desperately to fix it before the comic has to go out. Runners for the blade had to be added, I had to redraw little bits and pieces to make sure the blade landed in front of the lunettes instead of crashing into them and thwarting the execution.

The most horrible moment was when I realised that Merlin had drawn Jakob's wings poking out above the lunette, which would probably save his life as 'cubi wings are supposedly practically indestructible. The adventurers have murdered lots of winged folk and wouldn't make a mistake like that, hence, the swift addition of a metal plate to block the wings. Which then required endless fiddling around to make sure it was in a consistent place every frame. I had to move the little peg holes for it as well - partly to keep things consistent but also to make sure they wouldn't interfere with the runner for the blade.

Then I noticed that the lunette was still raised in panel 5 but had no visible mechanism, so I added a metal peg to hold it in place.

That should fix it, right? Wrong. Hours before the comic was due to go out, I suddenly realised that we'd forgotten the release lever. I also took the liberty of adding Crake's hand in the final panel. Sorry, Merlin!

Since the adventurers are acting in a manner somewhat reminiscent of the Nazis, I felt it was only just and proper that they had a fallbeil, as used to execute dissidents during the Third Reich. The winding mechanism, pegs and other refinements were taken directly from this design.