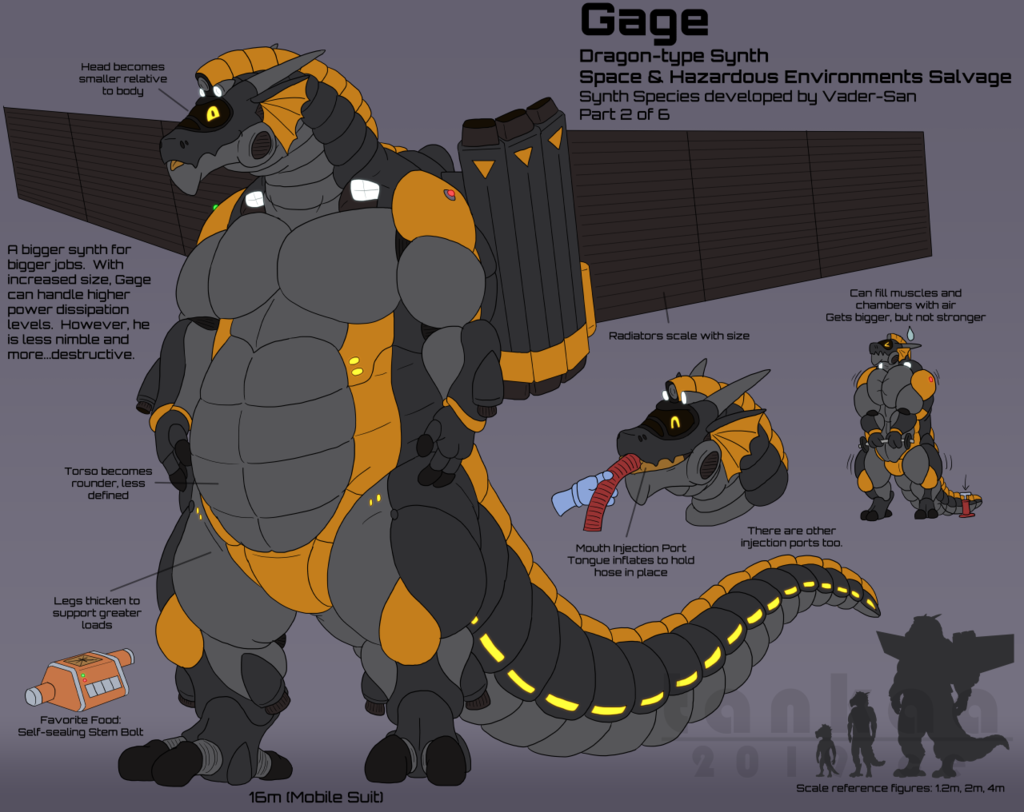 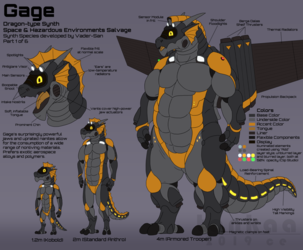 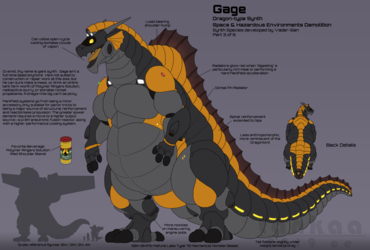 Part two of a six-part series.
FIRST | NEXT

This is probably about as big as Gage can get before practicality issues set in and unintentional damage becomes a driving concern. Even with those nice resilient surfaces, the synth space dragon is heavy and there's a lot of strength and mass behind each movement. He's at the limit of being able to safely handle a typical anthro wearing hard armor. On the plus side he has a ManiField module of reasonable output which means he's less likely to be damaged by a fall and isn't completely dependent on engines for flight and maneuvering. He can look most mobile suits in the eye at this point, which is pretty impressive for a synth.

Gage has features similar to Kobalt's Galleon such as injection ports and an inflatable tongue, although Gage is rated for harsh vacuum environments and is normally a biped, as versus the terrestrial quadrupedal hazardous materials hauler. On the other hand, things that give Gage indigestion wouldn't bother Galleon. Such is the nature of value engineering and design optimization. Given time, material feedstock, and information, a synth can handle just about any environment or task.

Given their pneumatic muscles, telescoping structure, and flexible skins, it seems almost bizarre that I'd be the one to be the first to suggest that they puff themselves up to look big. Obviously they only look big, they're actually weaker than they would otherwise be, and are rather susceptible to wind beyond a certain point. But it's amusing regardless and they seem to like it.

The self-sealing stem bolt is a critical ingredient of widgets, including the interocitor, turboencabulator, and McGuffin's Device. The material composition of typical self-sealing stem bolts is irresistible to Gage, making them an effective bribe or reward. Other synths prefer different materials, but they all seem to enjoy long-chain polymers, industrial chemicals, room-temperature superconductors, rare earths, and various metal alloys.

What do you know, I'm kind of enjoying this more than I thought I would. I guess I'll color the entire series. It's relaxing and surprisingly fun, in spite of the occasional bout of mania. For some reason I'm picturing Tankaa giving the explanations while doing his best to channel Shigeru Chiba.

"What? 'I already know it's a robotic furry, so don't waste time on well-known stuff.' Do you really think that this Synth is the same as a Protosynth or a Zoic Android, and that they are just animal robots? Yes, YOU! Yes, I'm talking to YOU! Mr. Viewer! They are not the same at all, in fact. Rather, they shouldn't have been the same..."