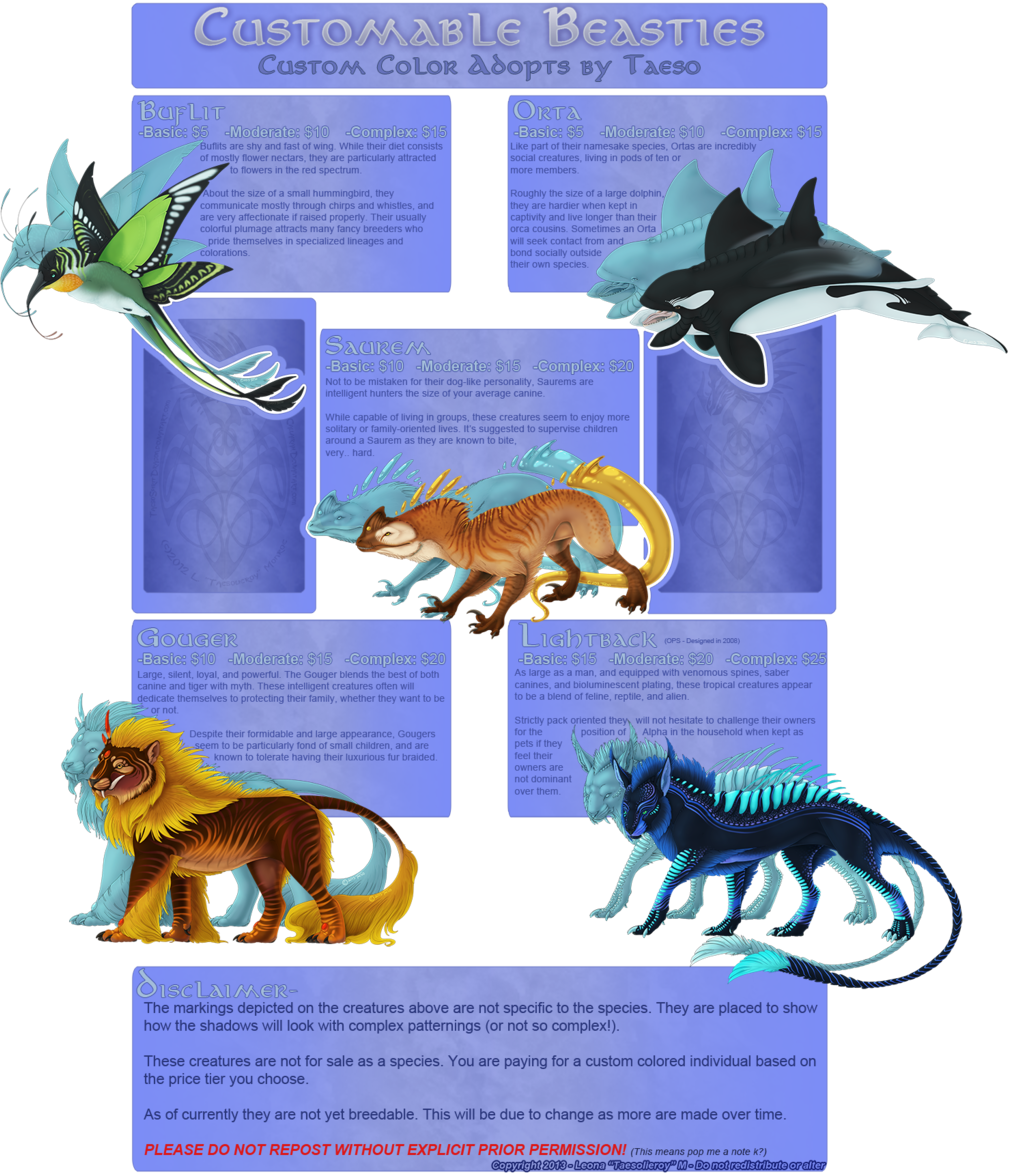 This is the little form I've drafted up for the time being!

I've designed the sheet to be added onto over time, so stay tuned for potential new additions!

http://taesospiritdragon.deviantart.com/journal/Customable-Beasties-F-A-Q-357037288- Please take the time to read the F.A.Q., there's a lot of important infos about them to read up on.

Failure to do so will disqualify your order request.

Species Infos: Pulled from the sheet for translation purposes.

Buflit-Buflits are shy and fast of wing. While their diet consists of mostly flower nectars, they are particularly attracted to flowers in the red spectrum.

About the size of a small hummingbird, they communicate mostly through chirps and whistles, and are very affectionate if raised properly. Their usually colorful plumage attracts many fancy breeders who pride themselves in specialized lineages and colorations.

-Additional info: Can be treated as a character or companion to a character.

Orta- Like part of their namesake species, Ortas are incredibly

social creatures, living in pods of ten or more members.

Roughly the size of a large dolphin, they are hardier when kept in captivity and live longer than their orca cousins. Sometimes an Orta will seek contact from and bond socially outside their own species.

-Additional info: Can be treated as a character or companion to a character. Ortas are incapable of flying or land travel despite their 'wings'.

Saurem- Not to be mistaken for their dog-like personality, Saurems are intelligent hunters the size of your average canine.

While capable of living in groups, these creatures seem to enjoy more solitary or family-oriented lives. It’s suggested to supervise children around a Saurem as they are known to bite, very.. hard.

-Additional info: Can be treated as a character or companion to a character. While flexible, the gem tail is not effective as a weapon. The long claws of a Saurem allow it to readily scale trees and other vertical surfaces they can grip.

Gouger- Large, silent, loyal, and powerful. The Gouger blends the best of both canine and tiger with myth. These intelligent creatures often will dedicate themselves to protecting their family, whether they want to be or not.

Despite their formidable and large appearance, Gougers seem to be particularly fond of small children, and are known to tolerate having their luxurious fur braided.

-Additional info: Can be treated as a character or companion to a character. While appearing to be related to Fu dogs, Gougers have little magic to speak of comparatively. Their powers are more elemental, and not always shown in body color.

Lightback- As large as a man, and equipped with venomous spines, saber canines, and bioluminescent plating, these tropical creatures appear to be a blend of feline, reptile, and alien.

Strictly pack oriented they will not hesitate to challenge their owners for the position of Alpha in the household when kept as pets if they feel their owners are not dominant over them.

-Additional info: Can be treated as a character or companion to a character. Along with the bioluminescent plating, the claws, tail tip, and mouth of a Lightback glows with various intensities. Being a tropical species, they do not tolerate colder climates. Females are larger than males, but the males dominate the pack, and are more aggressive in general. These are also a species that has been in development since 2008 and are intellectual property of :devTaesoSpiritDragon:. A species sheet will eventually be made going more in depth with them.