Gender: Can be male or female at any given time

Fur: Dark gray with medium gray lower jaw, cheeks, neck, chest, belly, and underside of tail, while forearms, toes, and eyebrows/area around eyes are light gray. Bridge of the muzzle is black, ending at a point at the forehead. Another long black strip begins at the base of her skull, all the way down the neck, between the shoulders, down the back, ending at the base of the tail. Mane and claws are is also black. Upper "lips" and the tip of the tail are white.

Accessories: Three silver stud piercings down the edge of each ear and a cuff-like eyebrow piercing through the left brow.

Other Features: All pawpads, gums, tongue, genitals, nipples, inner ears, muscle tissue, and skin beneath the fur are various shades of blue. Blood is black in color and all internal organs are monochromatic.

Name: Carina Rodriguez (prefers to answer to either "Syn" or "Cari", if a derivative of the human name MUST be used)

Now the fun stuff! Well, like I said, I'm a genderfluid Florida-born furry. I have a strong emotional attachment towards animals (to such an extent that I've spent the past several years running a foster home/rehab shelter for abandoned, stray, and injured animals), a passion for a multitude of creative outlets (drawings, writing, and singing, cooking, just to name a few), and an outgoing personality alongside a quirky/goofy sense of humor.

I identify as genderfluid, feeling neither fully female, nor fully male at any given time, and sometimes I lean more towards one than the other. I -do- cross dress as a male a lot of times, or at very least, tend to have a stronger preference towards more male-like styles of dress. It's -extremely- rare for me to be particularly "girly" for prolonged periods of time. XD

I'm happily taken by the amazing love of my life, who can be found here:

We've been together since August 5th, 2002, and became engaged on our 10th year anniversary. I love my pup more than life, itself. <3

I love all kinds of music, but my favorite styles are Trance, Techno, House, Dubstep, most types of Rock/Alternative Rock, Pop, and R&B. I also enjoy a very wide variety of cuisines, and am always excited and willing to taste something new. I'm never scared to undertake a new culinary adventure! =D

And now to broadcast all my nerdiness!

Single-Player Games Played: Legacy Of Kain: Soul Reaver (2 & Defiance), Kingdom Hearts (1 & 2) & LITERALLY dozens more. Seriously, I have NO hope of remembering them all off the top of my head. Mostly all RPG/Adventure/Story-Driven games with a few scattered rail shooters and fighters for shits 'n' giggles.

Want To Get Into: Vampire the Masquerade, Werewolf the Apocalypse & Warhammer (Fantasy version)

If there's anything else you want to know about me, don't hesitate to ask! ^.^

Most recent: I Against Me 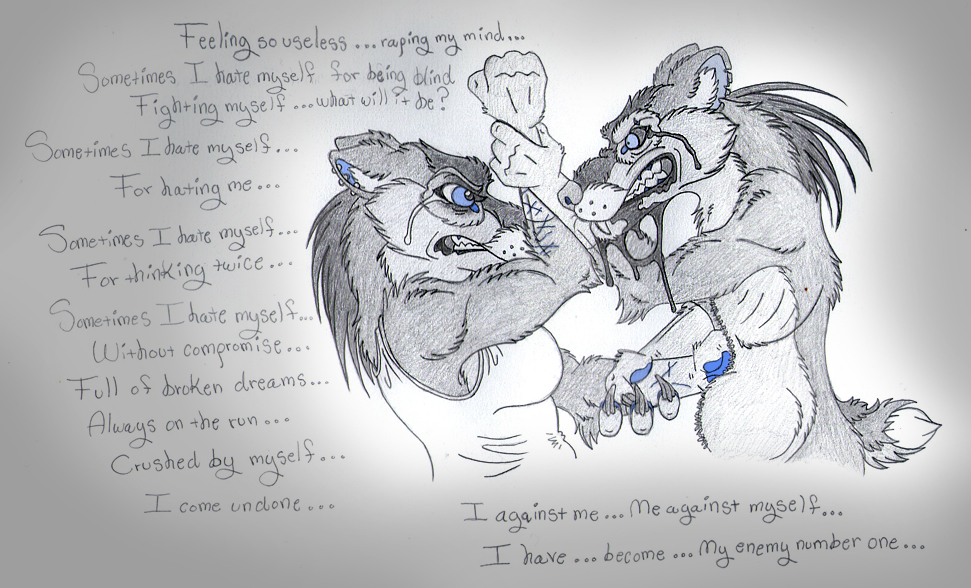 Signal-boosting for an EXTREMELY important cause brought to light by ShineBright about an absolutely horrific case of animal neglect:

A poor 7 month old kitten was subjected to DAYS of starvation and agony, WHY...? Because her previous owner was saving up for a furry convention this coming weekend. Amazing. I can't WAIT for the ASPCA to crawl fifty feet up this disgusting person's animal-abusing asshole.

Little Ebony's fate is still uncertain (she's in a REALLY bad way, so she's not completely out of the woods yet), and the shelter has gone above and beyond the call of duty to rescue this cat. They MADE space for her--JUST for her, even when the shelter was technically full and they weren't supposed to take any more animals--and even went so far as to go to the owner's house to pick up Ebony, when the owner kept making excuses not to bring her in. They're literally working to save her life out of their very own pockets. So please. Even if all you can spare is a few bucks, give from your hearts and send this poor little sweetheart all the good vibes you possibly can. And if you absolutely can't donate, the best way you can help is to spread the word and repost ShineBright's journal anywhere you can (and please do that, too, even if you ARE donating--we need as many folks to see this as possible!).