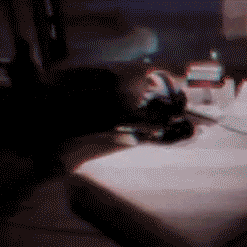 Preitor sighed. Even though Rekkin could actually hold an intelligent conversation, his voice was still about as bearable to listen to as the vocal track of a hardcore screamo song without the song to back it up. They were sitting behind the counter of what used to be Kenn's Salvage, a small store run by a quarian who was on his pilgrimage. "Why haven't I seen any vorcha like you before? Before you, every Vorcha I've run into has barely been capable of speech," Preitor inquired.

"So you stay away from areas where vorcha are problematic. I gotcha," Preitor completed Rekkin's sentence for him. The less he had to hear of his voice, the better. If it weren't for the Captain's raging curiosity, he wouldn't even be here.

"Yes," came the hissed reply. Rekkin then began coughing quite violently. "I apologize, turian. We still have to struggle to speak."

"Of course you do. Your vocal cords, or whatever they are for your species, aren't really evolved for speech." Everyone knew that.

Preitor's manibles twitched. "I'm sure it does." Preitor's voice contained a hint of sympathy, and the vorcha may have caught on to this because they shared a breif moment of sustained eye contact in silence.
"You can type, can't you? I need to get out of here, but we can keep in touch through our omni-tools."

"It was good meeting you, Rekkin. I'll shoot you a message later."

"It's going to take me a while to get used to listening to that voice," Preitor thought to himself. He looked at his omni-tool as he walked down the corridor towards his apartment. No messages. His thoughts turned to his job. "What am I going to do with myself now that I'm unemployed?" While he did have the money to support himself for sevral lifetimes and then some, calling attention to one's wealth was a good way to get killed on Omega.

He approached his apartment door. Room 243. The door slid open, detecting his presence, and he stepped inside without looking up.
A female voice greeted him, "Captain Gavorn, I presume?"

Pretor instictively drew his pistol, pointed it at the source of the voice, and took a defensive stance. She was human, unarmed. She had dark, shoulder-length hair and olive colored skin. She was dressed very professionally. "That's my couch you're sitting on, there."

"Do you want me to get up?" she asked, quite calmly for someone at gunpoint.

Preitor ignored the question. "How did you get in here?"

Preitor's manibles twitched. He didn't like that answer. "What are you doing here?"

"Please, put down the weapon and we can talk. You might like what I have to say." She held up her hands in a guesture of peace.

"You couldn't just send me a message or something? You had to break into my apartment? You could have easily approached me at my job. I'm not hard to find." Preitor's patience was running thin.

"You don't have a job any more. Remember?"

Preitor's mandibles twitched again. "How the fuck did you know that?"

"My employer is very well connected."

The Captain growled, "And who would that be?"

"Captain, please. Put down the gun so we can talk."

A few seconds of slinece passed before Preitor reluctantly holstered his pistol.

"Good, now, take a seat." She guestured at one of his chairs.

Preitor felt weird being offered a seat in his own home. He sat down. "What is it that you want?"

"We have been watching you for a while now, Captain," she began.

The woman ignored the question. "We know that you were recently laid off from your job managing the vorcha."

"We also know that you are quite wealthy, and it's not because of said job."

"Lady, I don't know who you are or who you work for, but you seem to know everything about me. You'd better have something really good to say in the next five minutes or I'm going to put a bullet in your head."

"Captain Gavorn, my employer wants to hire you."

This is taking a while to write because I have tons of other projects and obligations going on at the moment, so instead of making you guys wait on a full chapter, I'm going to post each chapter in parts, as I finish them.