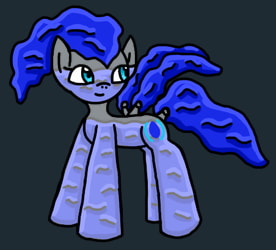 A drawing of Princess Cadence having her leg fixed.

This picture is based on something that occured in real life and does have some real life significance to it:

Back in January 2022, I bought the Rainbow Roadtrip toy collection, and Cadence was one of the ponies included as a toy in that collection.  All of the toys in that collection had their bodies made with a transparent plastic that made them see through.  However, a trade was that they weren't as durable and Cadence's legs in toy form are small.  I snapped off her right foreleg as I was getting her out of the packaging.  Every other toy in the set came out without a problem.

I was half tempted to just recycle her or throw her away after having snapped her leg off by accident.  But she doesn't give up on others on her show, so I shouldn't give up on her.  Now, I have a good supply of super glue that I use for some of my 3D printer projects, so I figured I'd use some of it to try to fix her leg.  It ended up working and I fixed toy Cadence's leg with it.