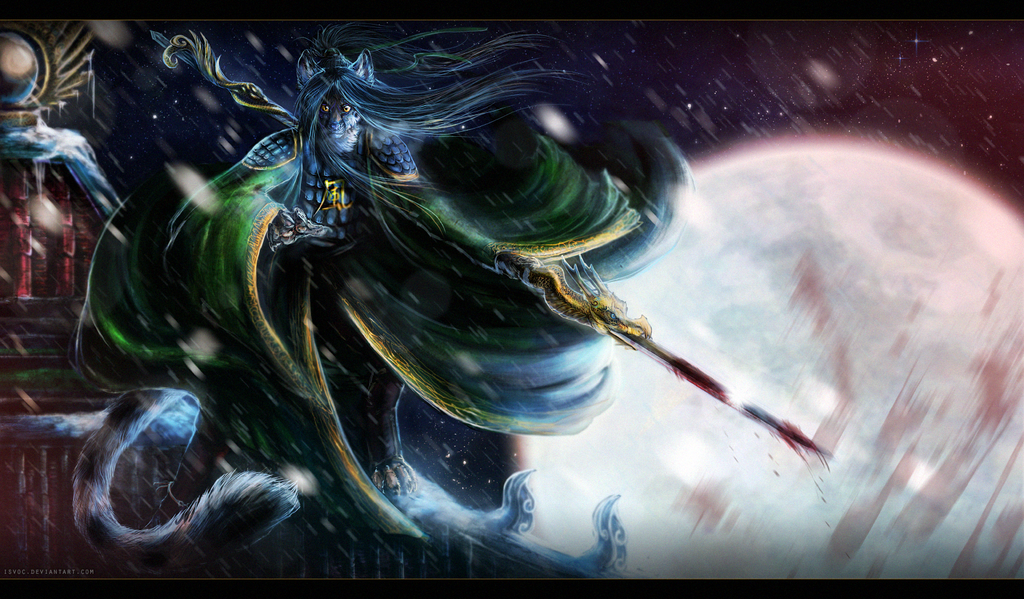 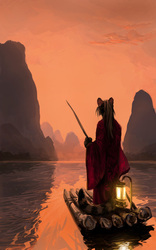 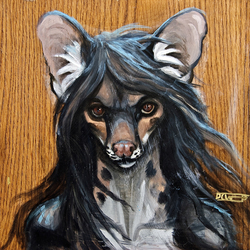 Stay unknowable as a shadow (by leilryu)

‘s art! Fav the original, then browse through the gallery! Or I will sneak into your house and spank you :3

Title is a segment of Sun Tzu’s (544-496BC) 2500-year old text, The Art Of War, Chapter 7, Section 17-19. The script is famous and often simplified and paraphrased by others. Isvoc designed the wardrobe and added fantasy elements to my plain yanyuedao, turning it into what one might be inspired to call the Green Dragon Crescent Blade, the legendary yanyuedao supposedly carried by the deified Guan Yu, one of the Five Tiger Generals of Shu state of the Three Kingdoms period in Chinese history. The color theme of his hanfu also match Guan Yu as well ^___^

The moon comes out, along with the cold of snowy mountain whiteness.
Ballad of the Ancient Cypress, Du Fu.

故其疾如風，其徐如林，侵掠如火，不動如山，難知如陰，動如雷震。
Move swift as a wind and orderly as a forest. Raid as a fire and be immovable as a mountain. Stay unknowable as a shadow and explode as a thunderclap.

The winter eventide teased residents of the ancient city. Its walls kept out invaders, though the barriers remained helpless against the perilous onslaught of winter. Rosettes of frost clung everywhere like delicate paintings left by unearthly scribes, scintillating in the moonlight like precious jewels. Spindly shadows were cast by anyone skulking under the full moon, kept company by an audience of countless stars overhead. The occasional drunken rambling or giggle of night-goers broke the gentle rustle of the wind through the bamboo forests outside. Sparse clouds ride along invisible currents, leaving small offerings of drifting snow that gathered in crevices and nooks, adding a pale dappling to the town. It was an ominous night.

Above the sleeping city was a game of waikei1 incarnate, of chance and strategy, of ambush and chase; the stakes—life itself. One learned the act of benevolence only succeeds if the other wasn’t trying to part your head from your body immediately as repayment. The only suitable solution was a swift end. Living the remainder of your days with endless caution and mistrust placed a low value on one’s own life.

The clay tiles of the old roofs were not especially resilient. Yuxing leapt like a nimble cat over hips and ridges of the closely-spaced buildings which overlooked narrow winding streets and courtyards of siheyuan2, making his best effort to stay below the ridgeline, to avoid turning himself into a silhouette. His lithe body moved along with ease, the weight distributed evenly as he landed on all fours, long tail twitching about for counterweight to keep his balance on the precarious landscape above the ground. The circumstances had escalated and this current state of affairs had carried on deep into the night. The snow and frost made slick surfaces even more precarious. The moonlight made strategy difficult. It was becoming fatiguing mentally and physically.

The enemy was on high ground, looking to surprise from above with a swift death blow. High was a relative expression, however. Yuxing had leaped, crawled, and clawed his way up, kneeling upon one of the higher rooflines in the cramped administrative district, bloated with bureaucrats and their opulent buildings to reflect such ruling power. His form lay in the shadows of a valley on the dark side of the roofline, hidden by ambient light. The large roof charms decorated the imperial building and loomed overhead as silhouettes against the ridgeline, silent witnesses keeping watch over events unfolding below.

His long sleeves were wrapped like spring rolls around his arms, his clothes drawn tight against himself by his tail coiled around himself. The valley gave him shelter from the wind, and he lay in wait, silent eyes watching as a shadow below him moves near the eves of the roof, close to the edge so they could leap to the lower level in a surprise attack. The form moved with exquisite skill along the surface, any gentle sounds being masked by the wind. Yuxing unfurled his scarf-like tail from his muzzle and sucked in a long cold breath, the freezing air shooting a pain through his sensitive teeth, graced with a burning chill that crawled down his windpipe and settled into his filling lungs.

The familiar sensation of falling twisted his organs into a tangled knot as his feet left the anchor of solid footing. There was nothing above or below now to halt his descent. Eyes focused as the shadow below grew larger and more detailed. He twisted at the torso, contracted his abdomen as his arms moved like knots at the end of a spinning rope, building velocity that was complemented by his plummet downwards. Stars in the background winked out of existence for the blink of an eye as the blade whistled through the air with great speed at the last moment, the distance so close there was only time enough to register absolute surprise.

There was no time to react or counter. It appeared only as a translucent white fan amongst the snowflakes as it swept in a great arc. Its pure whistling timbre was interrupted with the slightest of hesitation, a dull thud, before it finished its telltale song. It completed its journey as a crimson, misty streak against the stark white Moon.

He narrowly shot past the edge of the roofline of his vanquished adversary when the blade passed through, as intended, and he landed on the roof level below, the excess energy dissipating into the wooden rafters underneath with a loud crash as digitigrade legs bent to absorb some of the shock. His upper body collapsed forward from the momentum of dropping two stories, halted only when hands impacted tile to aid in slowing his violent and slippery descent. The clay tiles crunched and shattered into pieces as they joined his noisy tumble down the slope. There was no grip at all. Yuxing put his efforts into a strong kick off the ledge of the roof he slid off. The forward momentum cleared the width of the alleyway far below and landed him on an adjacent roof, now skidding up the incline shortly before gravity bled off all his speed.

He grumbled and got to his feet and brushed himself off. Eyes turned to search the skyline just in time to see the motionless form tumble off the building above, dropping with a wet thud onto the outcropping below with a ruckus, before rolled and tumbled like a ragdoll with the fresh rubble, eventually coming to rest on the snow-nipped street level below. The element of being covert was long gone. Yuxing flicked his blade; the dragon’s sharp tongue had been stained red with a meal. People would be here soon to investigate. It was time to leave.


1Weiki is better known as Go, a strategic game with basic rules, but infinitely complex. There are currently no computer programs that can consistently beat an intermediate-level Go player.
2a private residence which had buildings arranged as a quadrangle, creating a central courtyard surrounded by a continuous building on all four sides.