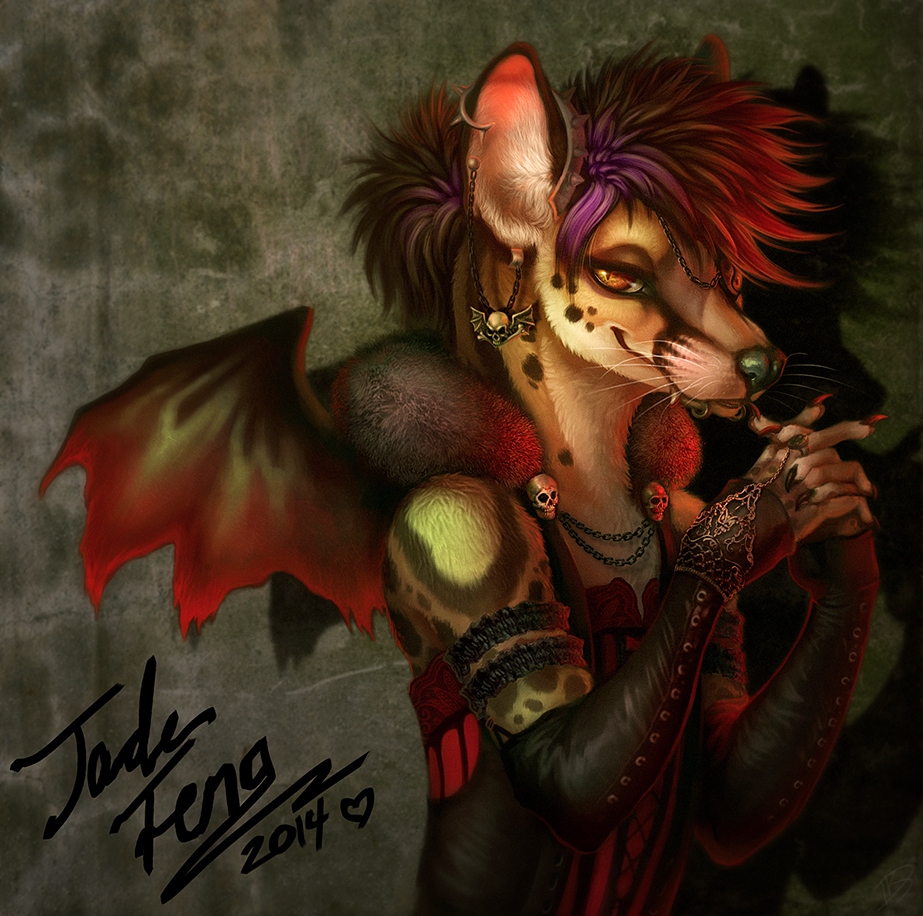 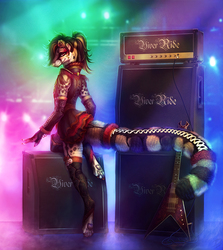 We're just coming out to play the game (by hanmonster)

‘s art. You should go visit their gallery and fav the original!

Title is from Superheroes, a track by German power metal band Edguy. This is one of two non-canon commissions I under the conceptual theme of guitarist “Jade Feng” of the power metal and Japanese visual kei band, Viver Ride. It’s a silly play on viverridae or viverrid, the taxonomic family of linsangs, genets, and civets, and holds a weird lost-in-translation feel. The aesthetics were influenced by visual kei band Dio Distraught Overlord

Riggs: Afternoon rockaholics and metalomaniacs! Welcome back from the commercial break. This is DJ Riggs with news on ALL the hot gigs. You’re listening to 98.7 KCYA FM, The Axe of Seattle! Playing the newest, prime cuts of metal and rock, indie to mainstream! Yowza! We have a very special treat today for all you goys and burls today. I’ve got the one-and-only…

Riggs: Jade Feng of the power metal band, Viver Ride, and…this is a treat because you’re all decked out in your visual kei bells and whistles! There’s even a pair of batwings…we should have gotten you a stool instead of a chair. He is in studio with me right now, in the flesh and fur because…tell me why, bro?

Jade: Thanks for sending out an invite, Riggs! Glad to be back in Seattle. Is that guyliner? I hope you didn’t wear that on my behalf!

Jade: I’m out today to promote our album that’s been out for the last few months, our third studio album release. Promethean Folly. I’m also going to be at the…

Jade: I’ll be at the Musical Bum record store down on 1st and Denny from 10 to 3 tomorrow…this Saturday…

Riggs: Whoa! You’ll be out and about mingling and greeting the fans?

Jade: Yep! Without our fans, we’d still be eating ramen out of dirty pots in some garage, so we want to show our fans how much we love them! I’ll be holding a guitar workshop from ten to noon, then move into an hour beer-slash-lunch break where I’ll take questions and also be autographing (HIGH PITCHED) schwag!

Jade:Schwag! All of the good stuff. After that, we’ll move into a two hour session from one to three on visual kei costuming and design…how to do cohesive deisgns, layering. I’m always delighted to see fans in the crowd getting into the cosplay spirit. To be honest, I’ve even been jealous of a few outfits I’ve seen at the concerts over the last few tours.

Jade: We have the best fans, and I really mean that! The support is so overwhelming; we just love them to itty bitty bite-sized pieces!

Riggs: So Jade, tell all our eager metalomaniacs out there about your latest release…I mean the process, the thought, the how-hotdogs-are-made bits that we rarely hear about. Tell us about all the juicy bits and pieces. We’ve got two of your tracks in heavy rotation on the playlist here and our phone lines absolutely blow up with rabid fans, demanding more! Yow!

Jade: Sure thing! This was our most ambitious project to date. I think we ended up spending three or four months checking out various music halls, amphitheaters, venues, and natural and artificial spaces across the planet. We wanted to minimize post-processing effects so we were searching for places with great acoustics, a good vibe, and awesome natural beauty. So…in that process we ended up finding several awesome places to shoot some music videos. It’s so easy to post-process and autotune things nowadays. We really wanted to get back to the basics…to our roots, and lay down some tracks from the start that didn’t take racks of gear to tweak and…

Jade: I can’t speak for other musicians as I don’t really keep tabs on other groups out there seeing how we’re always buried in projects but…yeah, we ended up recording vocals in an amazing abandoned castle in Spain. I can’t recall what where exactly as it was quite a drive into the countryside to get to it. It was hauntingly beautiful. All the hard and irregular walls and rubble had an awesome effect on making the vocal tracks sound full and…

Jade: Sorry…yeah the vocal tracks are amazing. Then we ended up doing guitars and bass inside the Hungarian State Opera House in Budapest…in one of the auxiliary chambers, not the actual main hall. Talk about opulent! We ended up staying longer than intended and filmed a music video there…set up right on that grand staircase! It’s still getting edited together but I think fans are going to be really happy with…

Riggs:Happy?! Jade, I don’t think I’ve ever been disappointed with any of your music vids. It’s always ends up looking like some period piece out of a movie!

Jade: I guess we do tend to go overboard quite a bit. There’s a lot of prep work but it really pays off in the end, I think. So we found a great little venue back here in the states, south of Seattle…Tacoma I think it was, the Pantages theater. We fooled around with the mics…let’s just say the double bass never sounded punchier. It was just the right mixture of reflective surfaces and sound deadening. We got big sound out of the drums without making it sound like we were playing inside the guts of a whale. It’s damned badass. Oops! I can say badass on the radio, right? Damn too? Ah, I said it again…

Riggs: Sure! If you couldn’t, we’d have dumped it from the air. We’re on a seven-second delay so you’re good!

Jade:But there’s something magical about some of these places and how music turns out beautifully and effortlessly. We even have some operatic and stringed elements worked in for ambience!

Riggs: Yowza! You cats have really gone above and beyond and elevated the bar to a whole new level, shifted paradigms, thought outside the box. Most bands just rent studio time and go that route. It sounds like, pardon the bad pun…

Riggs:But you’ve already gone on a world tour just to record this album.

Jade:Oh Riggs! I have a surprise announcement, speaking of…

Riggs:A surprise? Jade, don’t hold out on us now!

Jade: Speaking of world tours…Viver Ride is officially going back on tour at the end of the year. We’re going to give ourselves a few months to get rested and relaxed after recording the album, but we’re definitely going to hit the road again…give our fans what they’ve been demanding. We’re starting with a European circuit, then swinging by Asia and taking a detour to Australia as well. After that we’re jumping over to South America and ending in America. We’re calling it the Civet War, Genetcide, and Linsangity tour!

Riggs: Wow folks! You heard it here first on KCYA 98.7 FM, The Axe! Viver Ride is going on a world tour!

Riggs: Jade Feng of Viver Ride will be at the Musical Bum record store this Saturday from ten-to-three doing workshops and giving away the first pair of continental backstage passes for their (PAUSE) Civet War, Genetcide, and Linsangity tour. You heard it here first on 98.7 FM KCYA, The Axe! I’m Riggs, bringing you ALL of the hot gigs! Now here is Siren’s Melody off their new studio album, Promethean Folly. I want to thank you again…

Jade: Thanks for having me on!

Riggs: …for coming in studio today and stay frosty, rockaholics and metalomaniacs! ROCK ON!