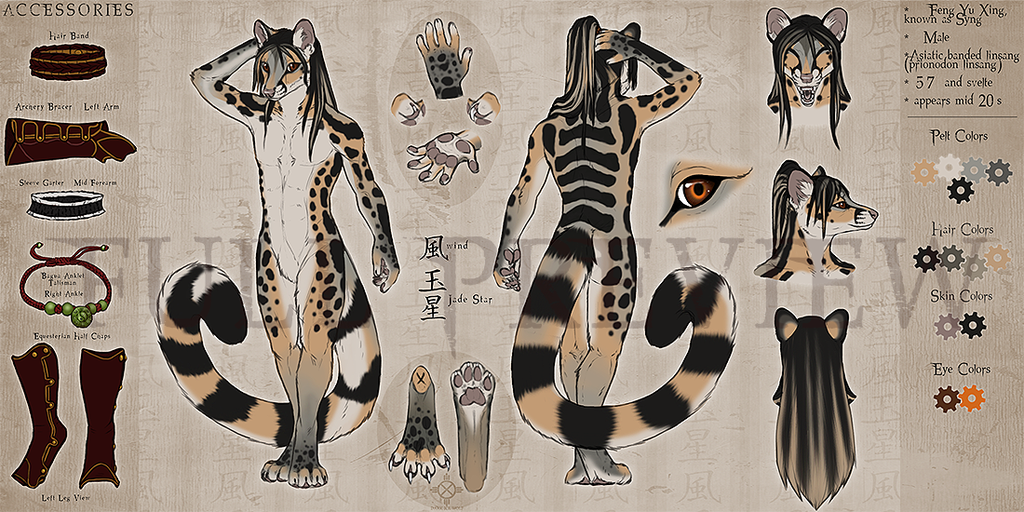 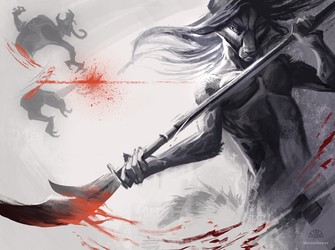 's art! One art please! And one art received! Please head their way to see more of their fantastic talent or I will poke you with a dirty stick.

CHINESE ZODIAC AND ELEMENT:
Born Water Boar, boar being the last of the 12 Earthly Branches, water the fifth stage of Wu Xing and last of the 10 Heavenly Stems. His balance naturally pure Yin and represented by Zhi Ming, the Black Tortoise of the North of The Four Symbols.

EYES:
Large and almond shaped, chatoyant brown irises, light brown at pupil and progressively darker outwards with flecks. Eyes set in border of black fur, with deep tear ducts and winged outline on the outside corner of his eyes

COLORATION/MARKINGS:
Coloration and markings as appears in reference drawings. Markings irregular with no consistent shape or size. Notable highlights include eight tapered stripes on the tail, starting with a black tip. Five irregular horizontal bands across the back. Black vertical bands above the shoulder blades that run up the neck, through the hair, to the top of the head, with two bands terminating slightly past the hairline. Two comma or wing-like markings at the shoulder blades. A pair of bands down the side of the neck that ends in a loop or swoop at the top of the shoulders; four blots at the front of the neck at the silver/yellow furline.

TAIL:
Roughly the diameter of his thigh and six feet long, enough to use as a field-expedient scarf or shield his eyes from rain.

CLOTHING:
♦Chinese pre-Qing dynasty hanfu. Occasionally with minimal lamellar armor.
♦A hybrid mixture of Victorian,early militaria, aviation, and motorcycling, wasteland explorer, and brown leather straps and buckles with brass-colored metal hardware (ie steampunk minus all of the gears).
♦A mixture of Style 1 and 2, of course!