Stripes and Asher by StripesZB 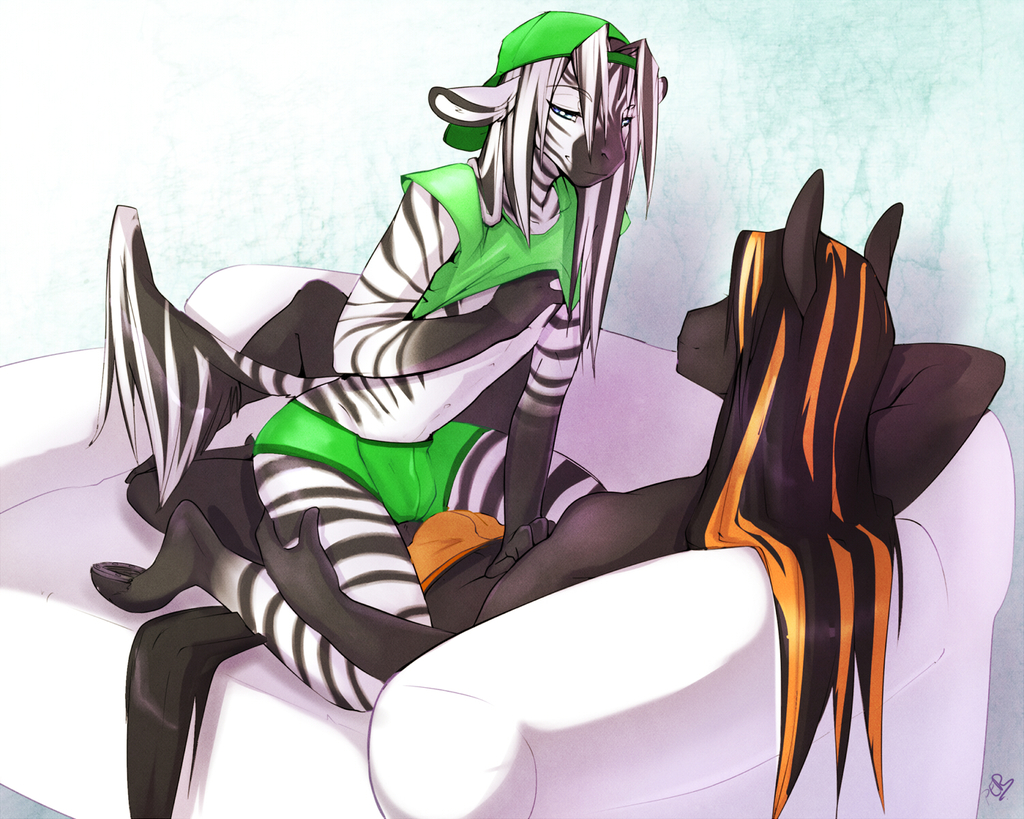 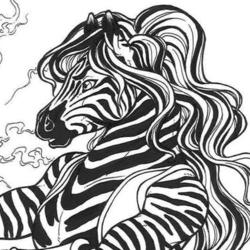 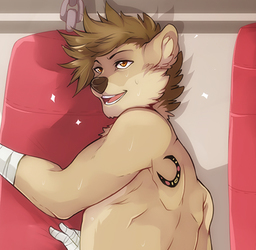 Asher was laying on my couch in his boxers, zapping through my channels. Malcolm was in the shower and I was making us some hot chocolate. It was almost sunrise and none of us had had any sleep yet. We had went from stripclub to normal club to drunk snacking to after hours, and had made it to my place in time to be sober again. My boyfriend was sleeping and none of us felt like teasing the bat. After a night so full, it feels good to simply bask into it and do things as mundanely as possible. Like drinking chocolate while watching the cooking channel. I sat next to the black-furred horse, handing him his cup. I leaned back and grinned. "So, who won?" I asked coyly, an expression Asher returned. "I did. I scored 4 drinks, 3 guys felt me up, and I get style points for tipping the waiter with a handjob." I hummed, crunching the numbers in my head, readjusting the cap on my head. "I disagree. I scored drinks from the barmen themselves, people asked me if I was a stripper at the club, and my style points beat yours: guys hit on me while thinking I was actually a lesbian".

We huddled together, giggling at our silliness. We did this whole thing maybe once a month. Our schedules tend to clash, and we also wanted to keep this special. The glisten of the three ponyboys parading down the center of the street, attracting every look, would fade if we did it all the time. Our debate was a little vain anyway. Malcolm always won, whatever the point system we put in place. Asher and I were hot, yeah, but Malcolm had an edge over us. We had to work for it, while Malcolm's innocence and good nature attracted all the predators. I swear, it's good the horse had us and his big wolf boyfriend to protect him, or the guy would never stop getting sexed up by strangers. It was something we couldn't learn, either.

Asher leaned his muzzle against my shoulder and I kissed him softly on the lips, running my fingers into his long mane, feeling the subtle different in texture between his dark mane and the orange extensions he was wearing. He told me he had worn them to match his underwear and I completely believed him. Asher was all about looking his best, all the time. It didn't take a lot of effort, either. He had done so many body jobs he knew exactly what to do. I often looked like a potato bag next to him. A very fuckable potato bag, yeah, but Asher knew just how to shine and highlight everything that was sexy about him, which was EVERYTHING.

I had straddled him and we kept on gently making out when I heard some shuffling nearby. Maybe it was Malcolm returning from his shower, or Dash getting up from bed. I kept deeply kissing the black-furred horse twink as he pressed his paw under my shirt, our tongues sliding against each other as my crotch bumped against his. He always tasted so good, whatever the part of him I had my mouth against. I finally broke the kiss, brushing my hair over my ear and looking to the side, grinning as I saw Malcolm pressed against the doorframe, with my hot stud boyfriend Dash in his loose sleeping shorts sticking his paw under the blonde pony's towel. "Gasp, honey? With my best friend? You're tearing me apart!" I mocked, the pale-furred bat hunk grinning at me. "What? He was asking for it. You know him. Little blonde devil." Malcolm protested on his adorable tone, and the four of us sat down together on the couch, watching Morena Hawker cook. Dash had his arms around me and Asher while Malcolm cuddled by my side, and I could see in my boyfriend's mind that he was already in the middle of a foursome with us. Typical. I pulled myself from the lot, sticking my green cap on Malcolm's head.

"I'm in the shower next. Don't fuck my friends while I'm gone, batty."

Asher -> My friend Legion
Art by