Selene in the Pacific by Strega 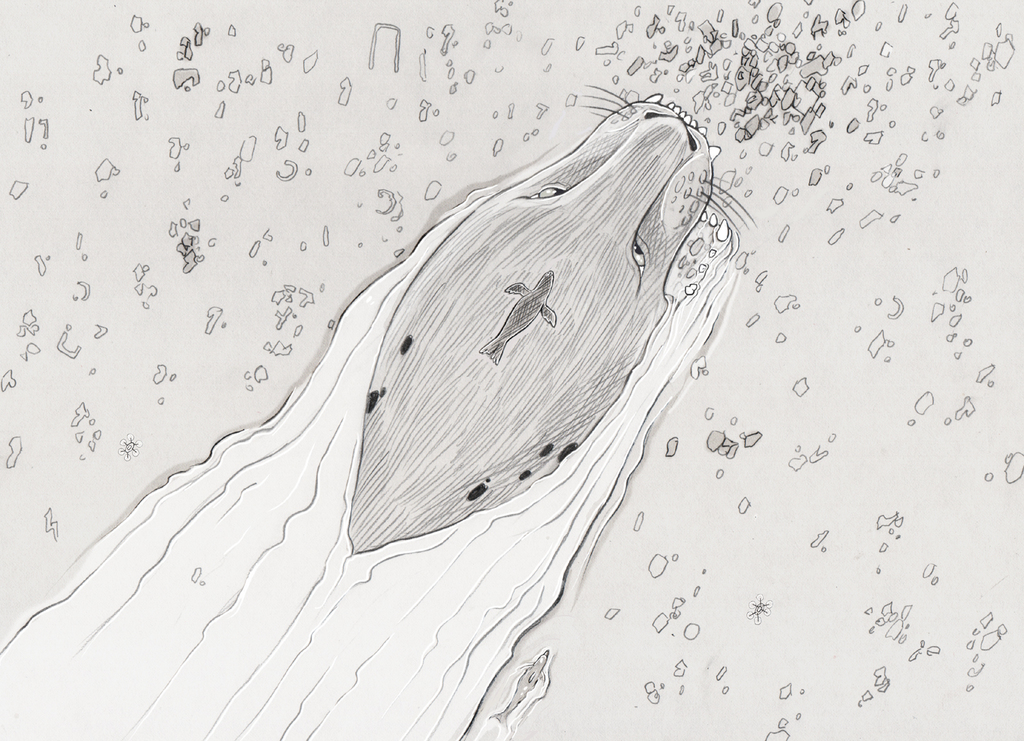 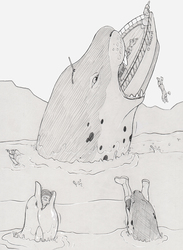 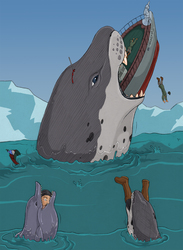 Selene in the Pacific

The disappearance with all hands of the whaling “catcher ship” Vendetta raised some eyebrows around the world, but the unpopularity of whaling in most countries blunted any serious investigation. The sea is a risky place to make a living, after all. A few years layer another, larger whaling ship – the Venture, a “factory ship” - followed it into oblivion...and this time distress calls lasted long enough for aircraft to discover something monstrous.

Satellite photos had shown -something- odd in the Antarctic, but other than a few cryptozoology nuts no one seriously believed they showed a living creature. And then the rescue planes found what happened to the whaler. Unbelievably, the radio signals were coming from inside an impossibly huge leopard seal that had swallowed the entire ship whole. The signals soon stopped as a loss of power or stomach acids silenced them, with the last despairing cries for help ending in a gurgle.

The existence of this colossus, and its likely role in numerous Antarctic disappearances, sparked immediate talks of a military strike. Despite its size it could easily be killed with antiship missiles or even torpedoes. Scientists pointed out that it could not possibly digest the whaler and was doomed to die of indigestion anyway, so a wait and see approach supported by aircraft and drones was implemented.

To the complete astonishment of the scientists the seal did indeed digest the whole ship. Given the size of its meal it was simple to retrieve samples of its “output” and determine that the monstrous thing was somehow breaking down metal, plastics, refined oils and other tough or toxic materials into simpler compounds. Iron remained iron but dissolved as readily in its gut as flesh.

Which caused an interesting idea to be advanced. Whaling ships, in their first truly international use for many years, left whale carcasses as bait and lured the seal from one floating body to another until it reached the “plastic island” of floating junk in the Pacific. The leopard seal, as hoped, immediately began to eat its way through, using its teeth to strain the trash from the sea and digesting it as easily as it did metal. Tons of plastic does not decompose but once converted into tons of seal poop it decomposes just fine.

A certain amount of sea life was vacuumed up and swallowed as well, and a solitary dolphin and normal-sized sea leopard that always seemed to accompany the colossus fed on seabirds and various fish attracted by all the excitement. The monstrous seal, now carefully tracked and monitored, was no longer a threat. It was instead a priceless environmental tool for cleaning up the ocean and as it slowly grew it became ever more efficient at its "job".

Barges began delivering hard to dispose of trash to the seal's neighborhood, and various civilian craft ignored the exclusion zone and approached to sightsee. Any craft that suffered an engine failure or weather damage, or simply ventured too close to the seal was devoured, their crews consumed either by the colossus or its smaller companions. All such vessels were deemed an acceptable loss, “No rescue to be attempted.” Sacrifices must be made, after all.