When the original Star Fox went to investigate Venom, Pigma didn't betray the team completely of his own will. Andross attempted to use psychic technology he had invented to seize control of Pigma, but only managed partial control with telepathic contact. Andross adapted, and was able to forcibly draw out Pigma's darkest impulses, promising him bountiful rewards for turning on his team. With Peppy escaped, and James captured, Andross attempted to use his technology on James the same way he had on Pigma, but James resisted strongly enough that the machinery was destroyed, breaking the hold Andross had on Pigma, but permanently branding Pigma with the vile personality that had been drawn out by Andross' technology. Upon examination, the resulting backlash had affected Andross, as well. Even if they were to rebuild the device, Andross' ability to utilize it had been crippled. And he refused to entertain the idea of allowing any other to try.

Despite his setback, Andross kept James alive, determined to study what had made him able to resist the prototype so strongly. He eventually found that James had significant psychic potential. James' capabilities were almost on the same level as what Andross had discovered within himself many years prior. James had been instrumental in the earliest trials of teleportation technology, having been the only one skilled enough to navigate the treacherous wormholes and emerge the other side with enough data to improve the process, eventually making it a safe process. It was because of James' involvement that Andross had experimented with the technology himself, determined to develop teleportation without James' help. And it was through that experimentation Andross first discovered his own psychic potential, and with it, his motivation to conquer and rule Lylat with his superior intellect. Now, with another test subject of considerable potential other than himself, Andross resolved to draw every bit of information he could out of James' mind.

More than a year he had James kept alive, refusing to allow his execution, even if autopsy promised greater results. Several times, James tried to escape, and nearly every attempt was engineered in an attempt to force his potential to unlock. It took a considerable amount of time before Andross' scientists were able to determine that some of it already had.

On further study, it was determined that James' dormant abilities were manifesting as almost negligible spatial clairvoyance and precognition. Split-second reactions that had always been attributed to skill and instinct. Even James himself had never been aware. In a way, the infinitesimal nature of his future sight and extra-sensory perception was what made them so useful. If they were any stronger, they would have interfered with his flight capabilities, providing too much information to be processed quickly. It was the perfect balance.

To the surprise of his underlings and scientists, this only enraged their Emperor. Those present were instantly set at odds with Andross' standing order to keep James alive at all costs when Andross bellowed with rage, murder in his eyes while trying to get to James on the operating table. None present would admit what they heard while they held Andross back, but many could remember easily how Andross yelled the name Vixy, how he accused James of letting her die, insisted he could have stopped it.

It was from the catharsis in the aftermath of his tantrum that Project Beloved Son was Andross' epiphany.

50% of the genetic material came from Andross. Even if his own abilities were stunted, the potential still remained in his genes.
48% came from James. Andross refused to entertain the idea of giving James equal share of anything, least of all this.
2% came from the late Vixy Reynard, extracted from a memento Andross had long held of his unrequited love.

Age acceleration was simple to incite for the engineered organism. Biological adolescence was achieved in a matter of weeks. Andross had his beloved son.

Jason, named so as some manner of sick joke, was instantly subservient to Andross. Despite his own damaged abilities, Andross' genetic link with the boy made connecting with him telepathically almost natural. He submitted to every experiment and trial that was asked of him, even when Andross wasn't manipulating him like a puppet. Records suggested that the act of linking caused Andross' own personality to imprint over time on Jason's, making them more of one mind with every passing day. He grew to truly hate Corneria, and General Pepper, and James McCloud, because it was that hate from Andross that flowed through his mind almost constantly.

Jason's own telepathic abilities were considerable, but took more focus and energy to expend on intelligent beings. Controlling base beasts, even large and monstrous ones, was conversely child's play. The only anomaly being Pigma Dengar. Jason could seize Pigma's mind almost as easily as Andross could his own. But despite the morbid curiosity to try, attempting to reverse what had been done to Pigma more than a year prior was fruitless.

Jason was also capable of telekinesis and psychokinesis, manipulating both matter and energy with his mind. Through him, Andross was able to conceive of a number of applications, inventing new forms of weaponry and shielding. But those were not the greatest ideas Andross birthed from the bond between him and his son. Jason was truly the beginning of the Androssian Bioweapon projects.

A variation on Andross' first psychic device was built on a staggeringly larger scale, permeating the planet Venom, connected to a heavily fortified bunker deep beneath the surface. It was from there Andross truly staged his entire invasion, gently guiding Jason to channel his abilities through the massive latticework that had been built, allowing him to send orders to troops across the system; operate the teleportation devices that were their greatest advantage; probe for sapient beings to give an image of the size of Corneria's forces; and to seize full control of the great, big minds of terrible beasts and monstrosities created on Venom, much the same as Jason himself had been. And it was in this bunker that Andross imprisoned James McCloud, determined to make him watch the spawn that hated him destroy the son who thought him dead. 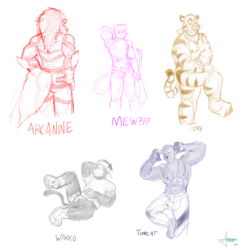 Jason exists somewhere between the continuity of Star Fox 64 and Star Fox Zero. He's a clone made from Andross, James McCloud, with just a dash of Vixy Reynard, because Andross is just that kind of sick fuck.