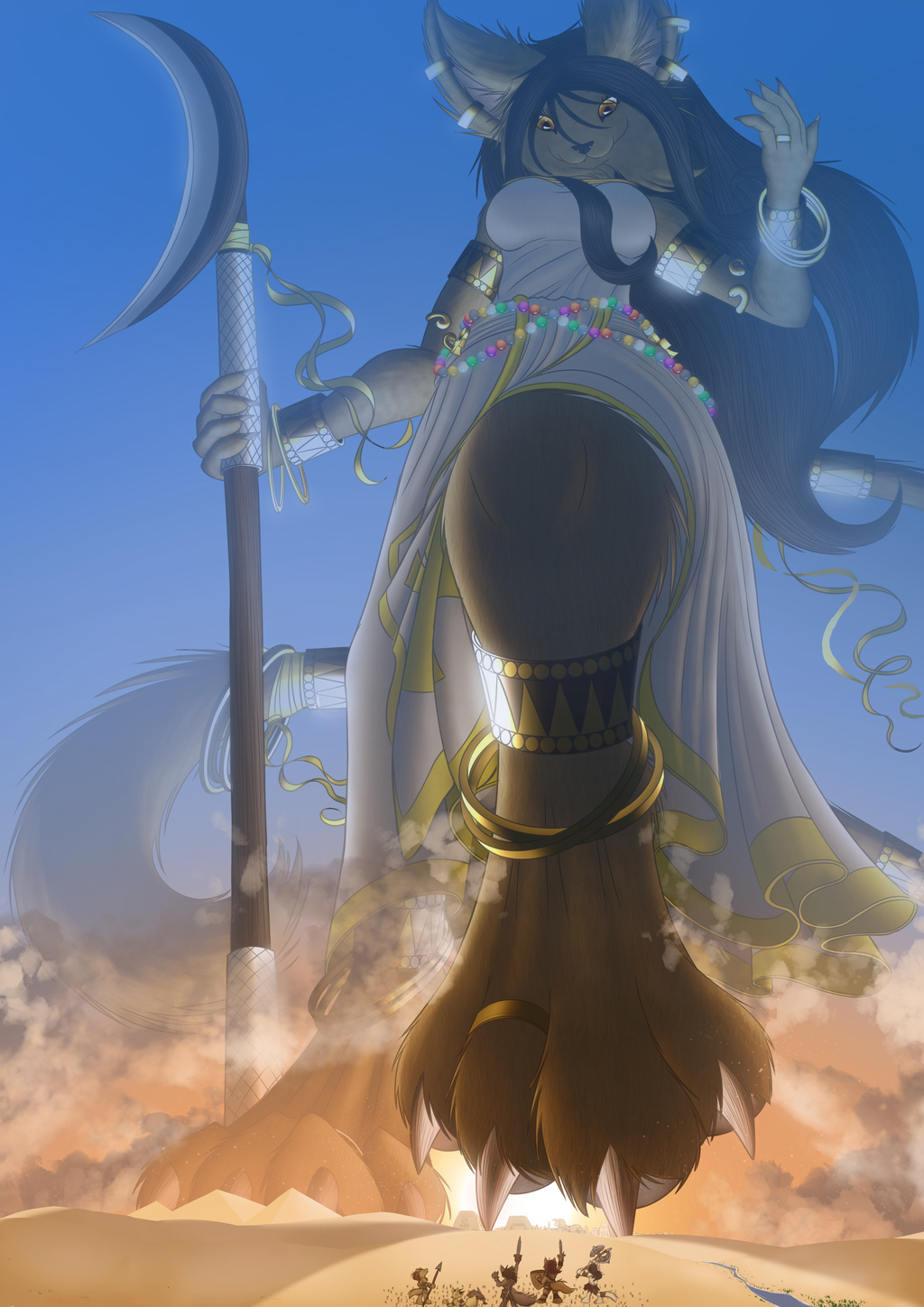 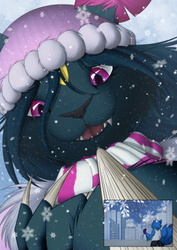 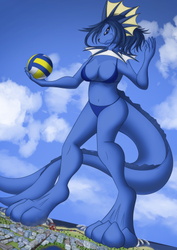 The mightiest of warriors assembled. An country's entire army, led by dozens of bloodthirsty macros, highly trained, undefeated warriors and barbarians united. Egypt would surely fall before their might.

Even though she's one of my oldest characters, Kiya is always an absolute delight to return to, time and time again. And she really does look wonderful in horizon dwarfing sizes, looming over entire armies with the greatest of ease.

VDO kindly wrote a short story inspired by this picture.
------

The army gathered into formation, rumbles and thuds and shouts filling the air. From the ordinary legions in their hundreds of thousands, to the lesser macros in their hundreds, to the dozens of looming Titans whose smug and proud smiles hovered hundreds of feet above the ground, the unmatched fighting force prepared itself for a sweep of the continent in a brutal and unstoppable onslaught. Few armies in history had ever had so many troops with such training and equipment to give them an edge, but fewer still had boasted of even a single macro among their ranks. None had ever had such numbers as this. Any one of the largest warriors could single-handedly smash (or, in most cases, single-pawedly crush) an entire castle, and most in fact had done so more than once. Across the entire continent, other nations had whispered and plotted, desperate to stop the creation of such an all-powerful fighting force, but their efforts had all failed. The army was formed, was trained, was ready. Within the year, weather willing, they knew their empire would stretch uncontested from sea to sea, and after that, the rest of the world would likely be nothing but a matter of time. Up and down the vast sprawling ranks, the building excitement and pride grew and coalesced into preemptive but assured triumph. Chants, cries, stomps, roars, shouts; all from the smallest to the largest knew that this was their moment, this was their hour! They belted out boasts and cheers so powerful in their unison that the very pebbles and stones of the fields jostled and rattled, the soldiers eager to be unleashed upon the helpless lands and crush them flat, to strike unparalleled terror into the hearts of their foes and rain defeat upon them with sheer size and might.

One by one, the cheers fell silent. The roars choked in throats. The stamps slowed to a halt.

Sharp feline eyes stared down upon them all, framed by billowing curtains of night-black hair, by fluffy tawny ears, by gleaming bands of gold, by the entire sky itself. They rose, unheeding limits and bounds, relentless and overwhelming, ever upwards beyond the horizon.

White and brown shimmered in the unfathomable gaze as it weighed down upon them, its forceless pressure pinning them in place as if flash-frozen. A slim nose and almost cute smile quickly filled the space where once the eyes had been, and they in turn soared skywards to reveal a neck more than capable of ferrying entire cities to the Titan's insides. Ornate bands of gold and black that dazzled in the light of the sun and fine silken cloth clung loosely to the figure of a young but healthy woman, her build that of an expert athlete and warrior, but magnified to the point of absurd supremacy and then far beyond. Feature after feature rose up into sight, as if there was always, always, always more of this endless giantess to be revealed. As a finely-woven gold-thread ankh flanked by glittering beads became legible, though, her long shadow touched upon the borders of the army's kingdom. It rushed forth in a slithering dark flow, enveloping their lands in deeper and deeper darkness, shrouding their cities and villages and farms and castles until all that was visible was the gorgeous, towering figure stretching from the edge of sight below to the edge of sight above. Between them and the feline were cities, fortresses, mountains, countries, entire empires. She was not a geographical feature. Rather, her huge fluffy toes rested casually upon the largest of geographical features.

At this extreme distance, it should not have been possible to see her in such vivid detail. Although the haze of sky faded her from view, the sheer magnitude of her scale left even her finest features starkly outline. The flawless smooth surfaces of her polished gold bands and bracelets, so much metal on her body that her outfit weighed more than some light armor would. The elegant finery of her clothes, unmarred by dust or dirt, tailored so precisely that it was as if they were a part of her. The precision carving and weighting of her tall staff, its crescent blade larger in the sky than the moon itself would appear and its handle so smoothed that it nearly looked like marble rather than wood. The subtle but unmistakable definition of her musculature, hidden strength enough to flatten a foe twice her size with her bare hands and legs. This Venus overshadowing the heavens had the beauty of an angel, the might of a champion, and the size of a celestial being.

And, visible as she took a single step closer, the speed of the wind.

Her paw thinned and narrowed as it rose, the pressure of her unimaginable weight moving and shifting as her knee drove forth. Her toes swung high, passing over distant pyramids and sands, reaching the borders of the far-off desert every bit as quickly as any of them could walk despite her frightening vastness. It returned to earth calmly, casually, but forcefully. Every strand of fur and bulging tendon and canyonesque pawpad was stretched and slid as her mass came back down upon her limb, balancing with precise poise born of both royal tutelage and feline agility. Around her plushly-pressed digits, a roll of sand swelled, and it pushed forward in all directions from the impact. As the army watched, it passed out of the desert and the curling wave of tan sand against tan fur instead became a brown and green roll of earth and grass and forest. It seemed to rise as it approached with frightening speed, but it was preceded by an even more frightening wall of sound. The cacophonous shuddering blast of her paw's touchdown slammed across the army and sent it sprawling, bushes and small trees uprooted and flung for hundreds or even thousands of feet by the sheer intensity of the noise powering through the air. By the time the soldiers began to right themselves and return their gaze to the horizon-spanning sphinx, they could see the physical shockwaves themselves finally starting to fade into the earth- stone-white with the upheaved and shattered rocks they were passing through.

Panic finally starting to settle in, the smaller soldiers found themselves struggling to stay on their feet as the larger giants caused continuous rumbles and shakes with their own hasty rise. But all were sent flat again as the next sonic boom of paw touchdown arrived, and the sphinx's gorgeous paws and precision-manicured claws settled in the cool grasses bordering the sweltering desert. Clouds of dust and particles floated skyward around her limb, enormous floods of dirt and upturned silt obscuring the horizon and the bottom of her dark black pads. Her upper claws stayed clearly visible above the haze, the smoke unable to reach the top of her cat-toes before her next step moved the paw forth. In her wake, the vast sprawling tendrils of brown and tan haze spread out and slithered through the sky, overtaking and gobbling up entire storms' worth of natural puffy white clouds like some ancient long-gone predator devouring entire tribelands whole.

The futility of trying to escape soon overwhelmed all. The soft touches of her paw upon the land, and the ensuing cataclysmic blasts, were mere seconds apart. Despite the immeasurable enormity of the sphinx's height, she moved fluidly and swiftly, more inescapable than the very light of day. Her shadow consumed their vision and their hopes, and they resorted to mere prayer that this heaven-surpassing being's pawquakes would fling them away from her to safety, if such safety could possibly exist. They no longer prayed to their kingdom's Gods. There was no point. Even the greatest, most exaggerated legends of those deities would quail in terror to behold the proud confident young woman striding across the continent towards them as calmly as if she were strolling to her throne. Pawfall after pawfall, and those limbs grew to blot out more and more of the horizon all their own, distances they could not cross within months instead crossed in seconds. It even felt as if the land itself was kneeling down to her, shifts in the leans of mountains and flow of rivers. It was as if her body was so vast and so grand that it drew the world unto itself, as if the very scale of her perfection pulled in worship and awe. Certainly, the soldiers all felt themselves turn towards her to stare, felt their fur and scales stand on end, felt their bodies bounce helplessly as the roaring tsunamis of rolling turf lifted them up to level with the bottoms of her toepads before throwing them down onto their hands and knees before her... Even the air they breathed became hot with the warmth of her body, thick with the dust of her travels, dark with the fullness of her shado-

Her paw landed before them- no, around them- toes resting wide and endless, so huge that the slight cleave between her middle two digits offered room enough for the entire army to sprawl. How much more they also concealed- their surroundings, their county, their kingdom- was impossible to tell. Walls of infinite craggy night surrounded them, stretching eternal from the upheaved ridges of displaced dirt and stone up towards the depths of space before ending in a lush jungle of combed and clean tan fur. The Titan stood over them, as indecipherable and incomprehensible as a mountain range to an ant upon its base. They could no longer see her piercing bright feline eyes, her calmly self-assured smile, her flawless warrior's figure. They could not see if she was peering down at them, at the strongest army in the history of the entire world, trapped helpless between two of her vast toes, nor if she was eyeing their entire kingdom all at once like a child examining their toys, nor if she was simply beholding the continent at large. But the sound of her voice was inescapable, and its sheer omnipresent power conveyed her message in terms which could not possibly be ignored nor misunderstood.

"I am here to evaluate the terms of your absolute and total surrender to Egypt. Your earnest, faithful worship of our Pantheon of the supreme true Gods and Goddesses is non-negotiable, but, you are encouraged to present your additional offerings of further gifts and displays of submission in their honour, that I may render judgment upon them, as the mortal representative of the one unsurpassed faith here on this world."