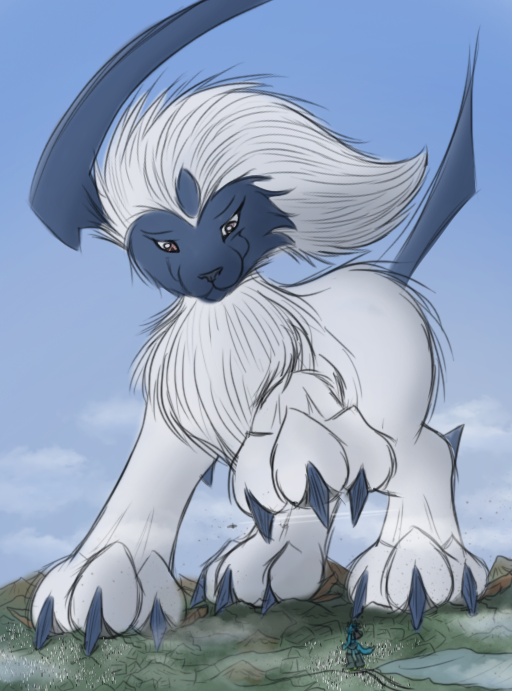 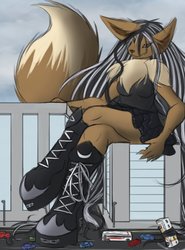 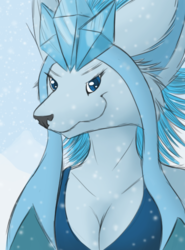 Absol has a certain way of greeting the new folks!

NMR wrote a nice writeup for this, so I'll post that below. Enjoy!

Lucarina knew it wasn't smart to let one's mind drift while they skated, she'd had more than her fair share of face plants and worse that way. Still, at this size, and with her special skates, there wasn't much danger of that. The wheels on her inline skates, specially designed for off-road travel, tore through the landscape with ease and even let her do some basic tricks on some mountains and grind down some of the smaller mountain ranges.

Just because she was traveling didn't mean she couldn't have fun.

However, as Lucarina exited a valley she had used as a small half-pipe, she had to skid to a stop and look up for the first time in a long time. Way up, in all honesty.

Standing atop the city she had been heading to, and apparently larger than the entirety of it, was something that she hadn't been expecting to see: An absol; one that stood on four legs instead of two as well. While feral pokemon were a thing, she had never seen one grow to macro size, or far beyond it in this case. Lucarnia was considered quite large by most standard, but this thing... it was easily several miles tall!

As Lucarina gawked at the absol, his gaze moved over to her. "Oh, hey down there!" The absol's booming voice almost knocked her over, actually forcing her back a bit. "Been looking for you for a while now." One of the absol's truly massive paws lifted up off the city below him, even that simple act causing a minor tremor through the ground. "Consider this a sort of... 'initiation', if you want."

That finally snapped Lucarina out of her shocked stupor. "Wait, wha-"

Lucarina let out a yelp of shock as the absol stomped his paw down, enveloping her in his step and flattening a large chunk of the landscape in his paw print. She struggled and growled, trying to get out from under his paw to no avail as not even her spikes seemed to have an effect on the thick pads pinning her down. Finally, after several moments, the pressure lifted as he removed his paw from her, looking far too pleased with himself.

"And there we go." While Lucarina was still pulling herself out of the insanely large crater, the absol was turning away. His steps sent such powerful tremors through the ground so powerful that Lucarina simply couldn't manage to get to her feet. "If I hurry, I think I can get Lumi too; she's long overdue."

THOOM!
Thankfully, the absol was so massive he left the area behind in a matter of moments, letting Lucarina pull herself out of the paw print and flop down against a nearby mountain. "Okay, what was that all about?"