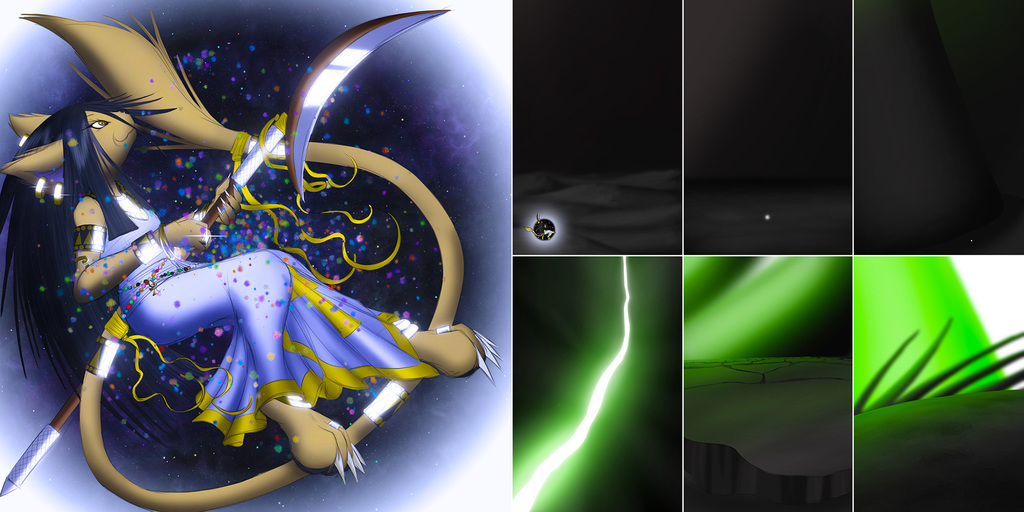 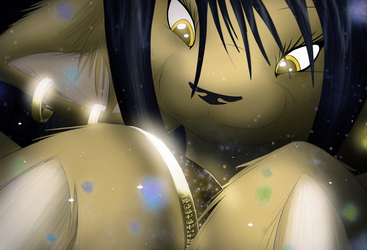 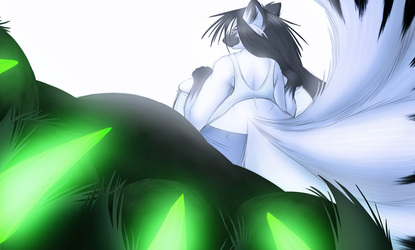 Kiya turned and looked out. In the momentary span of time it took her to do so, she outgrew everything that was real. Rather than infinitesimal Omniverses that were easily stored by the googleplex in her jewelry's spatial rifts, the Arch-Sphinx was now watching the Exoverses which contained the unreal and impossible as they dwindled beneath her. Even the infinite darkness of the void started to fade, brightened by the glow of Kiya's hypertranscendant body.

"Well… Here I come, my All-Powerful Gods and Goddesses, whether you're ready or not! Although I know you're surely very ready indeed, heh..."

That was all the warning she gave before she focused on growing. It was nowhere near enough.

In the very first instant, she was like an explosion. Like a new Big Bang, but not one creating a new universe- instead, she created a new class of Deity. Her form radiated blinding and humbling light, reflecting off her straining jewelry in a dazzling display. Peace and harmony and glory saturated all she touched, instantly transmuting all of history into an unending golden age of ever-escalating prosperity, where even the lowliest mortal lived better than the highest gods of the worlds before. And, more than anything else, she grew.

At that moment, she stretched from end to end. Her ears and hair stuck out of all, as did her toes and claws on the other side.

In the second instant, she became one with the concept of Everything. It was her, and she was it. Everything was pulled inwards towards her mass, settling on her as its new home and reality- one more stable and powerful than anything before it.

In the third instant, Everything accepted its new role as being a part of her. A very, very, very small part.

The fourth was the final instant. Her expansion and ascension simply became too much. Nothing could have experienced or survived such a rush, not through any twisting of law or fact.

In fact, she sped up.

Not just by a little bit.

Goodness, but my Gods must be happy with me to be granting me so much power…! Hm. I wonder where I am, now that I'm bigger than everything except them? Oooh, those look… Sort of like dunes! Perhaps I'm in some sand between one of their paws? Although they don't look like sand dunes, hm… Well, all I can do is keep growing, I suppose! At some point, I HAVE to get big enough to see where I am again… Right?

And there we go! We're completely out of space. Kiya has filled all of it! No really! All of it. She's filling the entire exoverse, her paws, ears and scythe poking into the void beyond all of space.

Just as a bit of a reminder as to how far we've come:

A Universe is an unimaginably big entity. It is everything spawned by the big bang at the start of time. Everything we could possibly know, and the endless things we will never know due to it's vast impossibly large size reside within it.

A Multiverse is all permutations of everything spawned from one universe. Every decision, from the large, all the way down to the subatomic level spawns a new parallel universe, making countless parallel universes. Any possibly route or path that life could have taken, has it's own alternate universe, some of which are vastly different to our own, while some are surprisingly similar. All of these alternate realities reside within our Multiverse.

An Omniverse is all permutations of everything that ever has, does and ever will exist in a universe. So every possible universe at every given time of it's existance resides within the omniverse.

...And Kiya's just outgrown them all.

But what could be beyond? We've outgrown space, time, possibility, everything, and we're growing into the nothingness beyond!

But it seems the void beyond everything ever DOES have quite the familiar green tint...