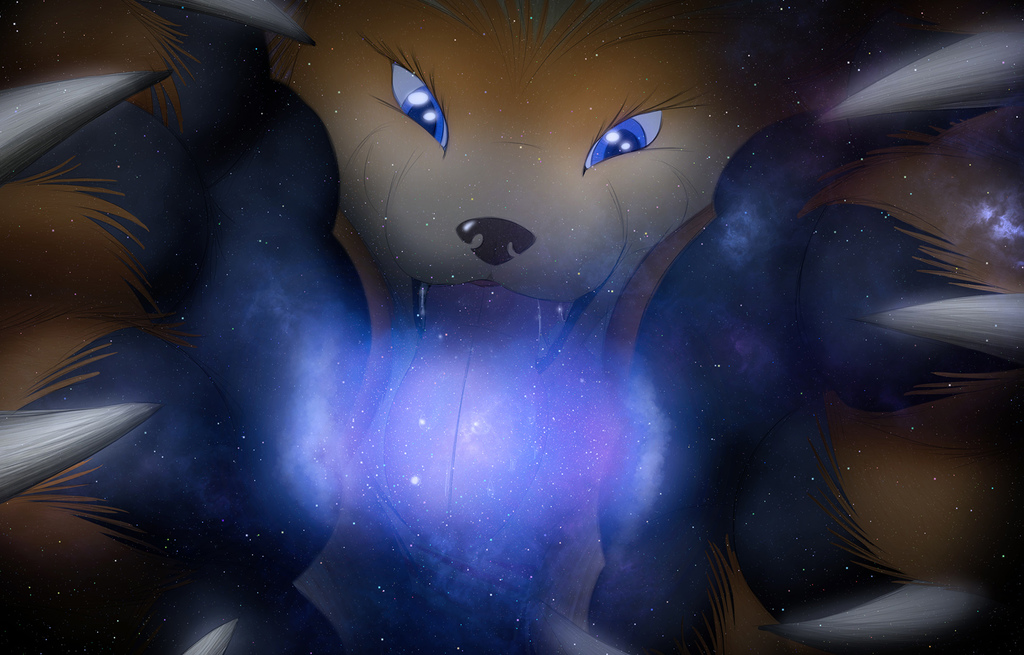 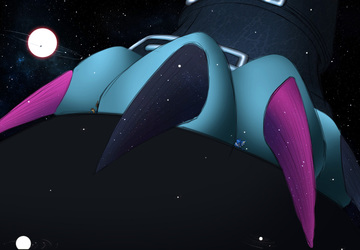 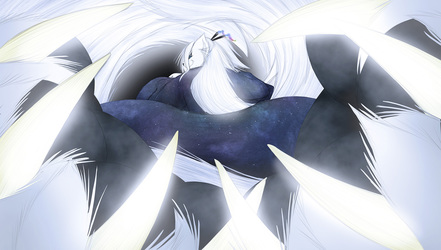 Hello, Lady Charity! Please forgive me for being so bold. I didn't mean to startle you! Is there any way I can make things up to you?

Charity let out a heavy sigh as she looked up at the looming, apologetic-yet-excited muzzle which filled all nearby multiversal space. That won't be necessary, Karin. I was just surprised that you were able to sneak up on me in such a large form.

No, Charity sighed again, I just- nevermind. The Suicune goddess felt a deep sense of awe in Karin's presence, as she so often did, watching the fledgling young Arcanine goddess effortlessly perform tasks which even Charity herself struggled with- or considered literally impossible. I just wanted to ask you for your help-

Karin's jaw dropped open, her tongue flopping out to fill the divine sky above Charity. Infinite cords and bands of doggy drool criss-crossed her maw, sagging under their own weight and collapsing in reality-defying snaps which were entirely harmless aside from splattering warm and loving slurpfluids across significant portions of reality itself. Warm, heavenly-scented breath washed over all, the canine goddess' pants like cosmic winds of peace and calm and comfort.

Help? I'd love to help! I'd love to help you so much, Lady Charity! It'd be an honor, and I'd do my absolute best! I can't wait, I do truly wish to serve you and the mortals and gods who depend upon me to the best of my powers!

I know, Charity agreed with a shake of her head. And I also know that you are already aware of what I want to ask for help with, and presumably have several solutions to offer me. Would it be fine with you if we skip to the part where you offer them, rather than you heaping dangerous levels of praise on me like normal?

Blushing furiously, Karin nodded her head, space warping and shifting around her so as not to disrupt anyone's day with giant Arcanine goddess movements. That's… A very good point, true! Sorry again about overloading you last time, Lady Charity, I didn't mean to supercharge you, but I was just so excited to be serving such a huge and powerful and wise and-

R-Right! Sorry. Well… I'll admit I did peek ahead a bit and see what you wanted while we were talking. I hope that wasn't too rude! And, yes, I came up with several solutions to the issue- as well as a few other issues I noticed which I thought you might be worried about when you noticed them as well, particularly the matter with Lady Kepi and her new friend.

Lady Kepi and…? Glancing down at her toes, then further down between the smilodon's toes, and further still down another pair of digits, Charity suddenly realized that her newest feline rising-star supergoddess student and her sub-pantheon had both managed to drift more than a little out of position. How in the cosmos did she get- and who is that mortal Sneasel? How did she get there, and why?

It's a long story, but I'd be delighted to explain it to you when this is all done, as she's such a wonderful young woman! But don't worry, I've already started personally implementing solutions to everyone's issues in the ways I hope you'd like best, but I'll be delighted to go over all of the alternatives and implement one of them instead if you wish?

That certainly won't be necessary, but I'd like to do so anyway, just for my own knowledge, Charity admitted. I assume it has something to do with why you have this entire Omniverse held between your paws?

Hm? Oh, no! That was just because so many lovely little mortals and deities were asking so politely if I could share my silly little paws with them. They were so very insistent, I felt like I needed to let them enjoy both! So I've got their Omniverse here, letting it float around and against and between my paws and toes. I'm not sure why, but they seem to be so wonderfully happy there, so I'll let them stay until they wish to leave!

Tapping her clipboard, Charity admitted, I find that… Entirely unsurprising.

But, yes! I've now gotten things set up so that everyone should be safe, and that silly cute little smilodon goddess will have all the food she could ever dream of to eat, don't worry. I'll help you grow faster if you need anything to help you stay larger than her as she eats, but I've looked you both over very thoroughly and it shouldn't be anything even remotely resembling a problem for you to stay bigger!

That's good, Charity agreed, trying not to think too hard about just how easily and subtly Karin seemed to be able to understand even a being as powerful as the Suicune herself, but I was more wondering about how she even GOT here. She's not from our worlds.

Oh! That! Sorry again, entirely my fault as always. You see, I'm doing a favor for a nice little young goddess. She's trying to find something very dear and important to her, and I've promised to help keep an eye on her worlds until she gets big and strong enough to keep them on her while she searches! That smilodon must have grown so big that her efforts to eat everything in that multiverse knocked it out of its path and into your toe fur.

Understandable. Charity curled her thick toes, the massive plush digits pressing flush with Karin's relatively larger pads and snugly cozy-smushing the many worlds between them. My excellent paws are extremely large and are highly attractive. But who is the other goddess you're referring to? There are no more than a handful of beings even close to our level, and- After a quick flurry of blinks, Charity buried her face in a palm.

So it looks like our entire omniverse is getting slurped in 3.. 2- nevermind too late!

It seems Karin is already on fixing up the damage done by some of the big folks earlier in the sequence! So for those of you worried about things getting broken? Don't worry about it Karin's got it all covered! She is such a lovely godddess!