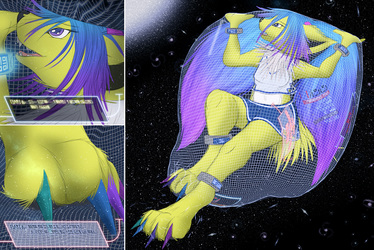 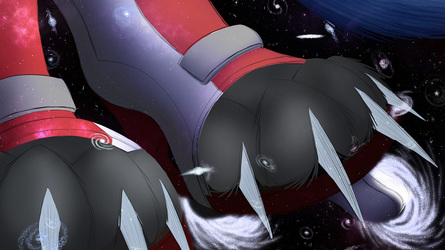 Erika looked down at herself in shock as the torn threading of the barrier shrank away against her still-growing form. Still growing, yes, but… This didn't feel like the game any more. There was no HUD, none of that barely perceptible sense of artificiality to the world, nothing. Erika was back in reality…

This was impossible- but it was perfect! It was the best thing! No- better than that! WAY better!

"I'm the biggest! I'm the very biggest thing ever in the whole universe, and nobody's ever gonna be bigger than me again! I'm gonna be in charge of EVERYone! Like… Like, a Goddess! Goddess Erika, the biggest and most awesome Araltian ever! And nobody's ever gonna be able to tell me to clean up my room, or do my homework, or stop smashing stuff! I'll get to choose ALL the rules, and everyone will do EXACTLY what I say, forever! And, best of all… I'M! THE! BIGGEST! EVER! FOREVER! ME! ER-...-i-...-ka…"

The self-proclaimed deity's voice trailed off slowly as she suddenly noticed the horizon. The fluffy, cream-colored, onrushing horizon. The distinctly paw-fur-shaped horizon that was going to barrel over her with its far-faster growth in mere momen-

"Mmmmmm… Ahhhhh <3" Pamela idly shifted her body, her plush legs settling on her cushion of stars as her heavy chest settled atop her waist in a series of lazy wobbles. "Man… This is so sweet. Never thought I'd find anything more fun than sunning myself on a beach, but, this does the trick! It's like taking a bath in sunlight, heh heh… Well, actually, I guess it is taking a bath in sunlight! But, eh, who cares about semantics? I'd rather just kick back, slack off, and relax like the big lazy do-nothing Rattata gal I feel like being today!"

With a simple thought, Pamela shifted her hair, swinging the thick bulk of red around herself like a coil and propping up her paws upon its braided length. Letting out a sigh, the teenage rodent barely even noticed a momentary sensation of glitchy weirdness near one of her big fuzzy toes.

"Hm? Wuzzat? Ugh, are my glitch-based powers warping reality in some unintended way again? I hate when they do that! … Well, whatever it was, it probably couldn't have been THAT big a problem, right? Yeah, probably nothing. Back to me-tiiiiiime~<3"

Looks like Pammy's been the cause of all the glitching in the game! She really is dangerous near any kind of technology - and when she's lazily filling an entire galaxy shes bound to be causing all kinds of glitching!