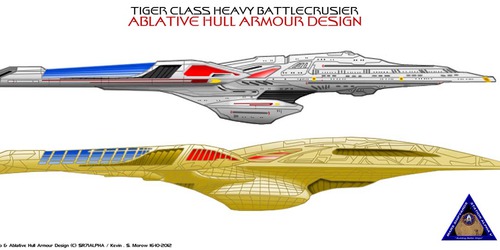 The Tiger Class is the biggest heavy battlecrusier of the Federation in the mid 25th Century. Its out sizes 24th Century Starfleet vessels including the Soverign and Galaxy Class starships. Created in the biggest Construction yard known to Starfleet and the entire Quadrant, the Tiger-class USS Tiger NCC74701-B was designed to be the most powerful starship ever created. Its weapons include Trans-phasic and Phased plasma torpedoes which are fired from the bottom of the saucer and secondary hull. The Tiger Class has a warp-capable captain's yacht hidden somewhere on the ship.

The Sovereign Class is the longest known battleship of the fleet in the mid 24th Century. In spite of this, its internal volume is less than that of the Galaxy or of the Ambassador class. In 2373, the Sovereign-class USS Enterprise NCC-1701-E is said to be the most advanced ship of Starfleet. Its weapons include quantum torpedoes which are fired from a module at the bottom of the saucer hull and various other locations. The Sovereign class has a warp-capable captain's yacht too, but they're never getting old.