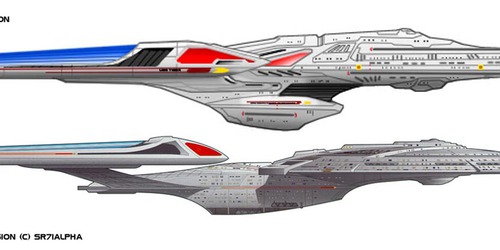 At S-A-V's Designing station we've came up with a new armour known as GAA (Gold Ablative Armour) suited for Heavy Battlecrusiers in the 25th Century. Even many captains and ensigns would try hard to get and sign up onboard these beautiful ships. The idea to have starships with AHA designs was based from the series StarTrek: Voyager "Endgame" but in the 25th Century. The Tiger Class looks like she needed one but with Gold armour doesn't makes her the Flagship but a Guardian of the Fleet.

The Starship and AHA Colouring took a whole day to do and I could be able to do the FWD, AFT, Bow and Top elevator views too. Any one who likes to 3D this starship please ask first thank you.