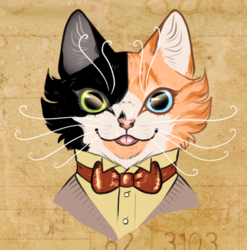 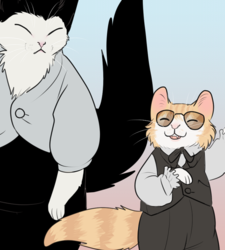 Casimir the giant, father of Magnus. he's something of a conglomerate of older character concepts as well as some new ideas.

A vagrant in the realm of humans, Casimir, partly due to language barrier but mostly due to a smug sense of superiority (being a giant nobleman), is standoffish and doesn't really care much for humans, as in the giant realm, the population is much more sparse and thus unique wares are few and far between and thus expensive and humans live in relative abundance, not to mention they reproduce fast, so he figures, no-one's going to miss a few, right.

He also has faerie allies thanks to his heritage (being directly related to arcane giants) so he can find a safe hiding place in forests, to the puzzlement of humans looking for him, how can such a large creature disappear in such a manner??

I'm unsure if I'll be keeping him as faceless or figure out some kind of face for him, but as of now, it will remain obscured.