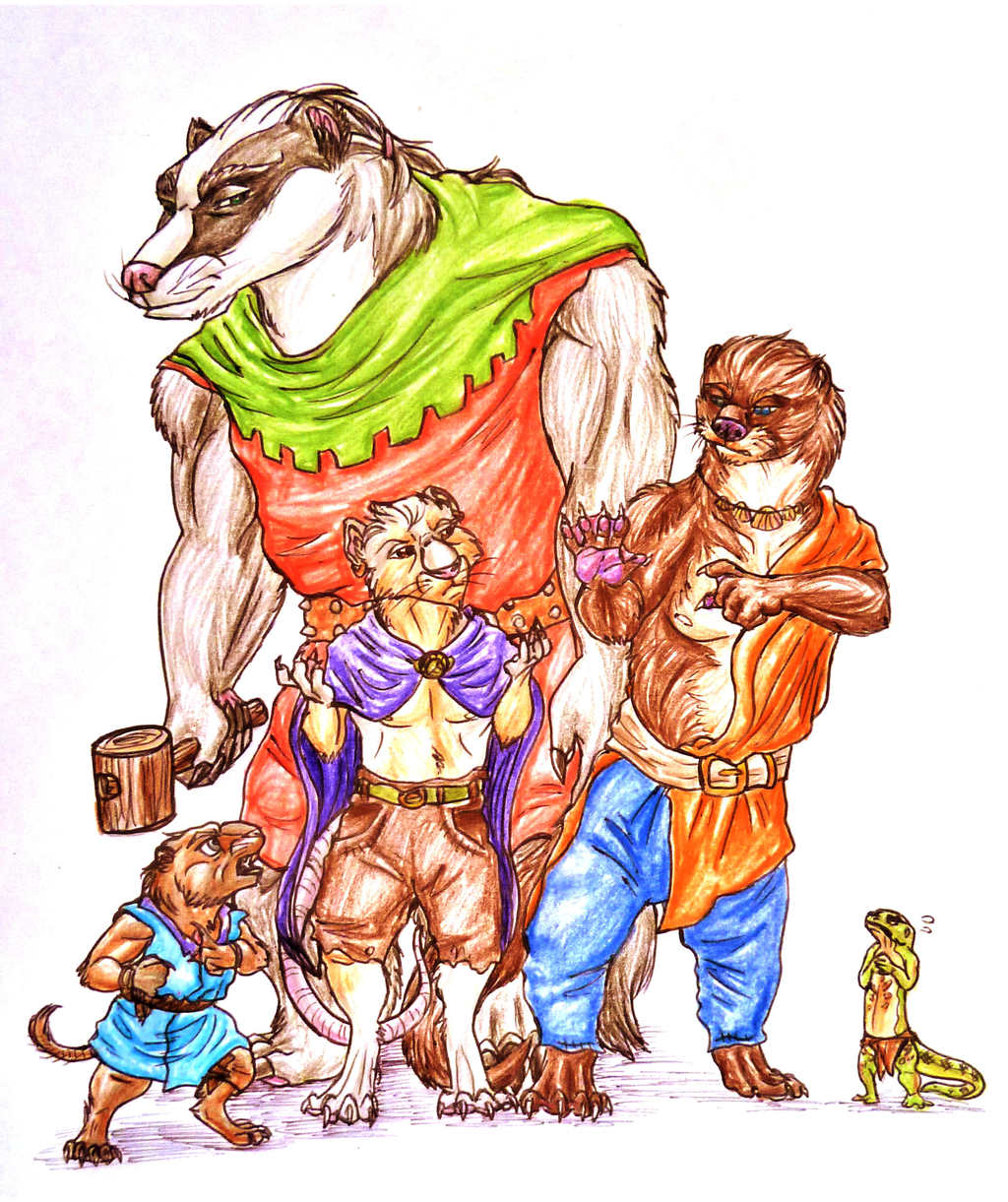 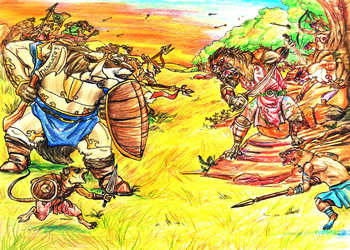 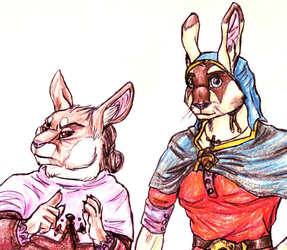 A group drawing to illustrate the size comparisons of Redwallverse critters, a member of each of five rough size classes all shown together.

The smallest is the "Super Small". It includes small amphibians and reptiles, like common newts, palmate newts, sand lizards and common frogs--and it also includes most of the small songbirds. Pygmy shrews and all bat species smaller than the mouse-eared are also in this size grouping!

The next smallest, appropriately called "Small"! It's a group with large membership, including all types of mice, voles (though some water voles push the boundary with the next group up), and shrews, and also includes dormice, jerboa ("jerbilrats"), moles, hamsters, crested newts, natterjack toads and pool frogs, slowworms and green lizards, pika and pretty much all of the bats not included in the super small group. The pygmy subspecies of common weasels is also this small. Most medium-sized birds such as rooks, crows, gulls, falcons and ducks, with the exception of the largest species, fall into this category also.

Next up is the "Medium" class. Pretty much all rats and squirrels, weasels, stoats, ferrets and polecats, mink, hedgehogs and gymnure/moonrats (which in my theory is what "Wearats" actually are), rabbits, monitor lizards, adders, common toads, somewhat larger birds like snowy owls, ravens, osprey, red kites, cormorants, snow geese, gannets, etc. Most creatures in the world of Redwall are roughly in this size range or smaller.

Next up is "Large". This includes pine marten and other marten species, river otters and sea otters, cats and wildcats, majority of fox species, mountain hares and common hares, large grass snakes, eagles, grey herons and storks. Smaller members of the species listed here typically fit more into Medium, and sometimes giant members of this group make it to the next class.

The largest class has no upper bounds and is called "Super Large"--for when just large isn't large enough. Beavers, badgers, wolverines, wolves, swans, pelicans, bears and gray seals belong to this group, though in the Redwallverse only badgers feature much at all. Also, all but the smallest hooved animals belong to this group (in the Euro-centric habitat defined in the series, this would include roe deer, wild boar, red deer, ponies and horses, and quite possibly elk, moose and bison.

So, shown here we have a common newt (Super Small), a bankvole (Small), a common rat (Medium), a river otter (Large) and finally a badger (Super Large) to have each group shown next to each other. XD Some of the official art unnerves me with how large and how small some animals are to each other, especially when a very smallish creature like a squirrel (or worse, a mouse) is standing next to a badger... who somehow is only what looks to be five inches taller. Sure, that's a big difference in mass for two humans, but I had thought badgers were giants compared to their usual allies? >w<; Thus, my headcanon-y size charts were born.

.>w<; And, welp, somehow all the characters ended up being drawn arguing except the newt, who just really looks like they wanna leave. XD