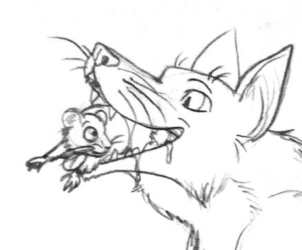 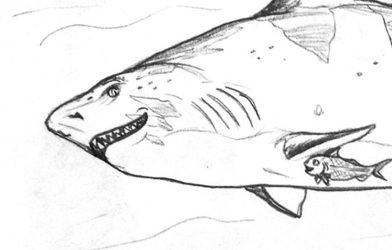 :) I got to thinking about all the odd, vore-related thoughts and actions I had as a kidlet, from very young ages to maybe 12-13 or so, and so sketched up some quick illustrations of them.

Up top and on the left is one of the first real vore thoughts I had (to my memory), happening for as long as I've had any recollection. I was easily scared by things as a child too and especially of shadows on the wall in my bedroom while I was trying to sleep. Oddly enough, the little nightlight that was made to comfort frightened kids was the source of my terror, and the thought of being eaten by a monster was what set me back at ease--if in the night the shadows cast by this irritating little light scared me, I would simply duck into my covers and think of one of several dragon characters I was fond of, and then imagine they had swallowed me to hide and protect me from unknown things. ^^; It usually wasn't important which dragon it was, or if the predatory protector was even quite a dragon but just a generic mythological beastie, just that they were a protective creature large enough to eat me and also deter other things. XD A few times it was even a werewolf who came to me in the night instead of a dragon.

Up top and right is... one of the sillier things I did a lot. I was fond of animal-based and fantasy toys, and a great many of the cheap ones could be easily modified to have an intriguing body cavity... There were rubber lizards, rats, crocodiles and snakes I "edited" in such a way and often during playing out silly childhood stories I'd have the hollowed-out critter "eat" one or two of the human or smaller animal figures. XD Since they were often made of rubbery material, they stretched rather well... Yep, a five-year-old messing around with same-size vore scenarios. It was great fun to me.

As I got a little older and more dexterous, my "toy edits" got more detailed... including a case or two of the doodle on the middle-right: A plush toy with a little cavity added to the stomach, with a small "throat" duct leading out of the mouth. Obviously wasn't as easy to do as with the simple rubber lizards, but there were two plushies who had this done and subsequently ended up having little mini-plushes hiding out in their abdomens. X3

Middle left was basically when I started writing... well, poorly at first, but the ideas were, generally, worth keeping. This one I have the idea to rehash into an updated moderately vorish tale. :3c I was (still am!) super-fond of dragons, and many of my favorite children's books were basically about dragons who were assumed dangerous and evil but were actually quite noble (if not completely harmless XD), so I think I copied the heck out of those stories. The vague little vignette was basically that a dragon out foraging had accidentally ended up with a particularly feisty female protagonist in his maw--which of course she didn't take too well! XD But things resolved with the two becoming friends. Still, it had so many vorish themes, especially the accidental nyomphing that I've illustrated here. X3c

Bottom is another chunk of brief story from my 4th grade days... just a snippet that was referenced in a short story trying to describe a hypothetical Atlantis-type city. I had added in my little school writing project that the people in this city tended to use ancient sea monsters as mounts in order to protect from high water pressure and be able to breathe well with no pesky, unreliable machinery needed. XD I don't remember what the reaction of the teacher's was... probably none, as it was a single sentence in a two-page story.

^^ Welp, there ya go. Some of dis snek's early vorish thoughts.