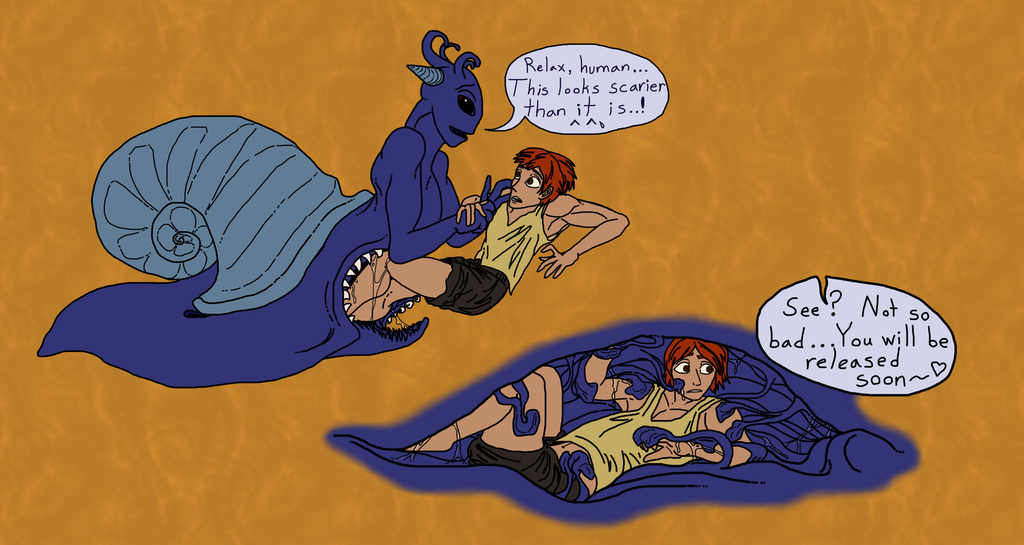 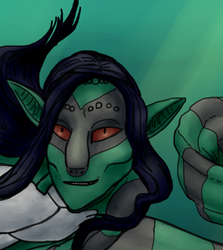 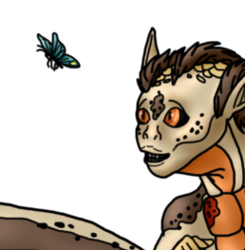 ^w^ Corochlians do vore very uniquely... While they are complete herbivores when it comes to consuming vitamins, minerals and organic molecules they need for cell growth and basic energy production they also have a need for radiation-based energies whenever their energy output exceeds their regular input. Cabbages and moss one day--live animals the next.

While they have a rather scary-looking radula (razor-toothed-sharp-pointy-tongue thing), this organ is only for shredding up plant matter into a fine pulp. When it's time to engulf another being, the radula folds outward and a second "esophagus" opens up behind it, much tougher and stretchier than the one above it. This short esophagus leads to a very stomach-like chamber that runs from below the middle of the shell all the way to about six inches short of the end of the foot, and the chamber is quite elastic and expandable. It is also located quite near to the pneumostome (probably spelling that wrong >w<) or breathing hole for ease of funneling air into the chamber for their live meals.

Once their live prey are sealed inside the lower stomach the tendrils you see in the internal shot here extend outwards and suction onto places of exposed skin to begin absorbing various radiation-based energies from the surfaces of the prey. The process and its sensations--as well as the aftermath--varies depending on the prey and the particular radiant energies they've absorbed. The worst the prey come out is squicked-out by the goo and tendrils suckering onto them--most of the time the experience is fairly neutral--and in some cases the process can relieve some of the prey's UV and especially UVB sun poisoning, as well as reduce the negative effects of radiation exposure. Any wavelength of energy is consumable by the Corochlian's feeding tendrils from simple body heat to UV trapped in skin pigment to bits of X-Ray radiation left over to extreme exposure to radioactive metals still trapped in the prey's body.

The process of Corochlian's energy feeding takes anywhere from two to six hours--depending entirely on the amount of pent up energies are stored in their prey. In some areas the radiation-reducing properties of being engulfed by a Corochlian are noted, and so those who have been unintentionally exposed to radioactive wastes or excessive X-Rays are handed over to hungry Corochlians for a kind of "treatment" which dramatically increases the likelihood of survival and cuts down on negative side effects. But of course, radiation leak victims do not come around every week, so the most common prey of Corochlians are random gardeners, beach-goers, and other recreators, along with the occasional wildlife or a lost pet (though they find humans and humanoids are much easier to get a hold of, so they prefer them to swift and wary wild animals).