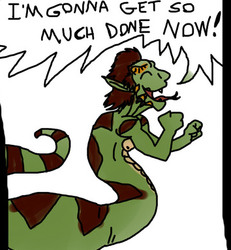 It's weird how stereotypes intersect. Snake stereotype=BAD WATCH OUT BITECHA GONNA GETCHA. Female stereotype=hit on 'er, creepily, it's all good. She's probably alright with it, and if she ain't it don't matter for she is of the boobéd sex. Ohmigosh, are those BOOBS??? CREEPY MODE ACTIVATED!

Drakness don't find it hysterical. Nonsensical, mebbe, but no funny. Slapping rude humans with a tail--now that is a funny. :3