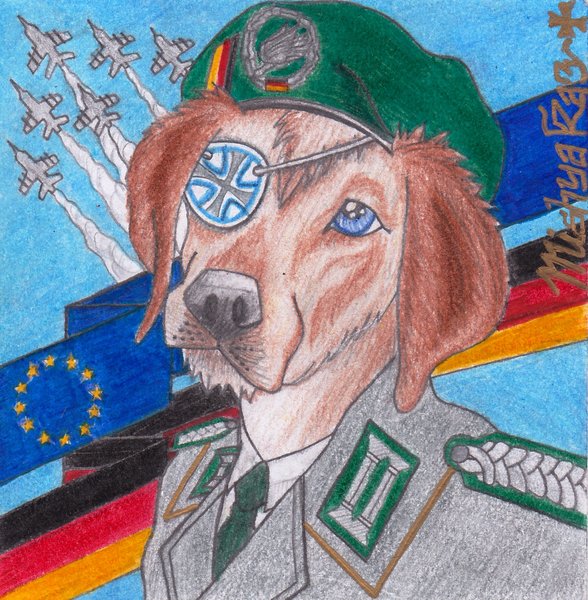 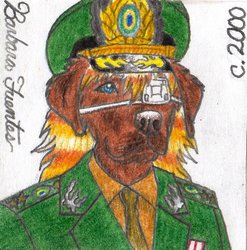 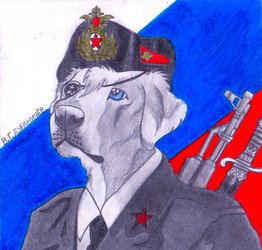 Let me start this off by telling you that this is a pretty old picture.

Nowhere near as old as those pencil sketches of Mishya and Karen, it is half-a-year old and is really worth showing to you guys. This is dated from around the time I had drawn and posted this picture, because I remember starting this one after the other was finished. And it may not be as cool or detailed as the other one, but I did have a lot of fun drawing this. It was an experimental piece with my new set of markers at the time to see if they would hold color on such a small canvas like this. Miraculously it worked, and never got around to showing it off to everyone.

This has nearly the same theme as the other picture, but in a different setting. I intended this to be Mishya's representation of West Germany (and the other is East Germany) as it somewhat evolved into a present-day symbolism of the modern Germany. The green accents of his uniform are supposed to contrast the former red, and artistically, they are complimentary colors. I do remember being confused as to what to have as the background, as Berlin was represented in the other one as here I chose to include modern symbolism such as the [current] flag, EU flag, and Eurofighter jets in the background. Essentially this is more color-symbolic than the other one. Essentially, it is supposed to represent Germany being Mishya's home away from home.

I do like how I managed to make Mishya look older, as well as changing the design on his eyepatch; you can see how the current Iron Cross design of the Bundeswehr is clearly represented.

(On my commissions account, you can see that I have gotten a few pictures of him like this in the past)
Badge.
Freebie.
Digital headshot.

And this was back when I signed my name "Mishya Kaz," in which I tried a different font style but kinda failed. :p
Mishya Kaz © SpetsnazKaz