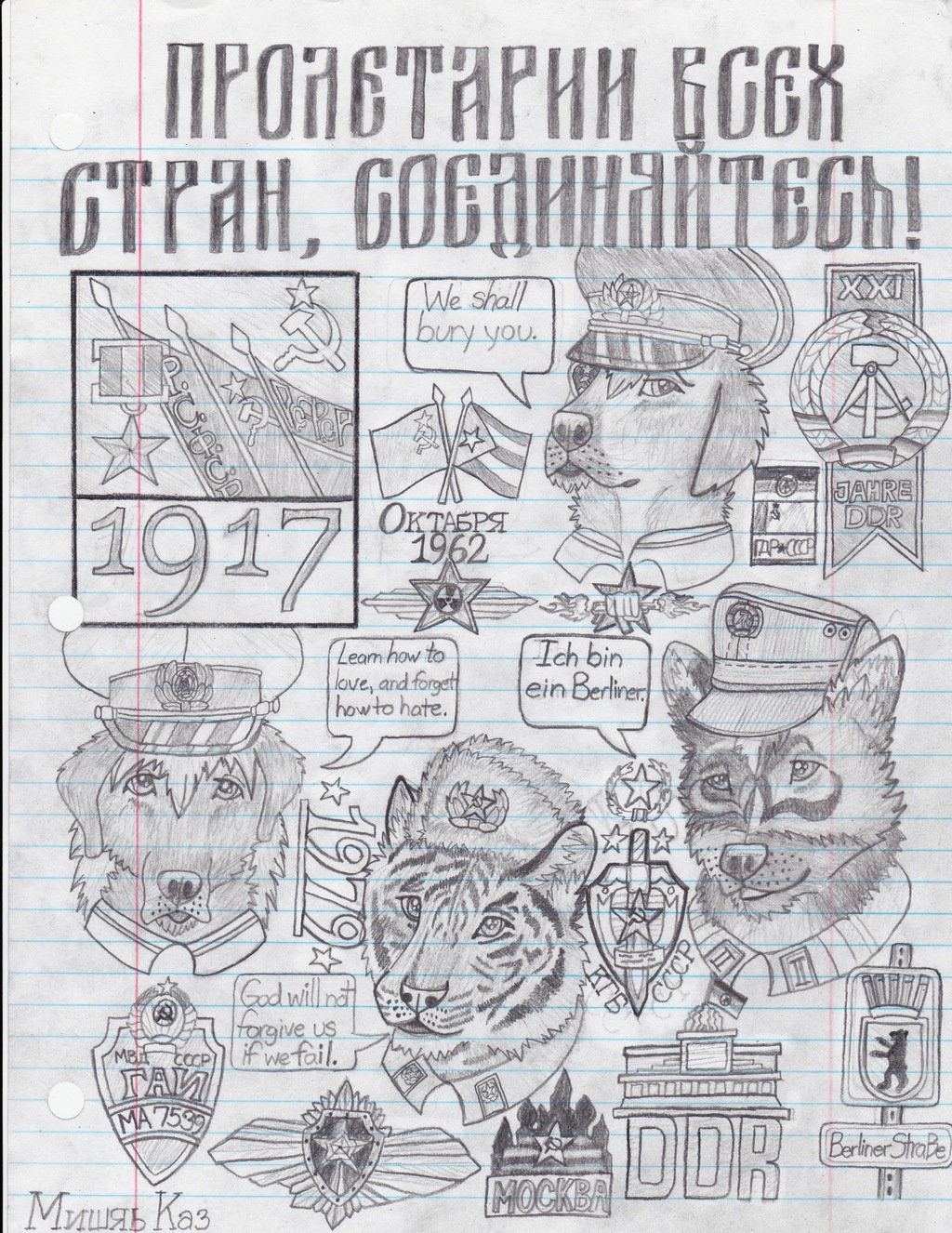 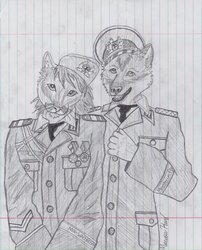 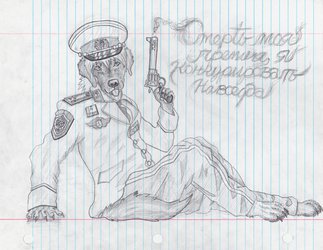 Документ Участи - Document of Our Fate

♬ In Europe and America there's a growing feeling of hysteria.
Conditioned to respond to all the threats
In the rhetorical speeches of the Soviets.
Mr. Khrushchev said, "We will bury you."
I don't subscribe to this point of view.
It'd be such an ignorant thing to do
If the Russians love their children too.
How can I save my little boy from Oppenheimer's deadly toy?
There is no monopoly on common sense
On either side of the political fence.
We share the same biology, regardless of ideology.
Believe me when I say to you,
I hope the Russians love their children too. ♬

And I suggest you watching this video instead, because of the historical facts being shown.

Allow me to introduce you to the most insanely amazing pencil drawing I have ever done. Here we have a varied arrangement of Cold War emblems, badges, and phrases amassed onto a mere notebook page. I've included a few of my characters in this piece adding to the effect by quoting famous people of that era (bonus points if you can guess who originally said them). The emblems and badges represent the characters' places of origin, service, and some events in their lives. Of course, you would recognize Mishya right away at the top, but I have introduced three more characters. It wasn't the first time I drew them, but this offers a good introduction for them to you, as they will grace my gallery pretty soon. Here are their respective backstories:

(Left to right)
Valentina Torchinovitch Krasnodon - Mishya's other sister, a brown Labrador, who was always regarded as the odd one out by her brother and sister Larissa. Over time, she grew to hate Communism and the politics of the Soviet Union, hating it more then ever she did in the age of the Tsars. Constantly referring to it as "An ideology that makes slaves of all men, women, an children," this is what she grew to believe was the cause of many of the problems facing the world. She tried to find her place in life, taking up numerous odd jobs, never really participating in war, hating it with a passion. Much of her life, she tried her best to stay clear of her brother and sister, as they made her feel a sudden hatred of herself and distaste for them, especially because they appreciate Communism. The last position she held was an MVD officer in Gorky. Defecting from the Soviet Union in 1979, she emigrated to Brazil to escape both sides of the Cold War, hating America just as equally. There she lived and served in the Brazilian Army under the alias Barbara Rodrigo Fuentes. She is known to be a massive hypocrite, armed and dangerous, as she became one of the most feared hitwomen of all time, hiding that identity from public sight. Ironically, she likes to kill people to spite her past, thinking it would pay retribution to the "horrible" lifestyle of her siblings.

Alexey Ganbaatar Khan - Mishya's only remaining friend in the USSR, an old Siberian tiger born in Mongolia and grew up in the Russian Far East. He has a very aloof personality, as he rarely talks, but only to close friends, vowing never to share his wisdom to those who don't deserve it. Never establishing a permanent home, he is regarded by the few who know him as a modern-day nomad, remaining quite mysterious and solitary. While few would appreciate the cold Siberian weather, he has learned to love it, as well as the virtually untouched wilderness, stating, "They are my natural friends, always here, as they never judge; only God can judge what happens next." Later, straying a bit further from his shy personality, he served in the Red Army, and eventually on the KGB, meeting up with Mishya, who is is advisor. He looks up to Mishya as a saint, with his knowledge of the greater good and having an angelic presence. Mishya trusted him with keeping his secret, as he sworn never to tell anyone, showing even more respect to him as he already had. But their families, work life, and occasional sadness had separated the two for years at a time over the vast Russian landscape, never seeing each other too often. It is said that they take their friendship for granted until they have to depart from each other, sharing a bond like two brothers.

Gerhard Jurgen "Finn Whiterose" Viktoria - The son of David and Regina, a wolf/puma hybrid (referred to as a pupcat) has grown up and survived the terror of Nazi Germany. His facial markings represent that of a mask, representative of his inner black magic, as his parents caused this at birth, not knowing the side effects of the powers they took from Mishya all those years ago to alter their fates. He spent his teenage years serving in the Grenztruppen of the newly formed DDR whilst holding a stressful career in his young life. Dedicating much of his time to military training and fitness, he gained a fit body to compensate for his violent and hateful nature. It is rare that he shows a speck of kindness to anyone other than whom he already knows, further proving that he was taught to be xenophobic. His parents want him to avenge the West for spreading its capitalist imperialism across the world, and eventually Russia for not protecting them against the fall of Communism. David taught him to hate Mishya, under the guise that it was of his doing for Russia to abandon the DDR and give into the "West's lies." He vowed to himself, and his country, "I will stand up to those who turn their backs upon my brethren, as they shall never grasp the sheer power of our true intentions."

Introducing a beautiful, symbolic, and historically-accurate sketch dump I finally found the time to draw. Yes, this is based off of something that's already existing. Recently, I found it [unfinished] in the massive pile of crap in my office. I wondered, "Hey, I'm really onto something here; what could I do to make it any better?" Over the course of last week, I tried my best to find the time to work on it. Brought it to college, back home, and damn near everywhere that had access to a quiet spot with a table. Hell, I've taken it to work on my lunch break a couple times. That's how motivated and dedicated I was to this piece, and hope to regain that same attitude for my future pieces.

As always, your comments are always welcome here, and I'd like to see a few pop up on this piece. Even though it's not required of you, I highly suggest you leave one as it shows how I can better myself on things like this. Oh and if possible or convinient to you, please leave a critique on this, as I believe it is truly worthy of one. And I hope I've amazed and/or educated you in some way, since subject matter like this is of my fortè. If there's anything you have a question about, please feel free to ask, as I would happily reply to it.

Characters © SpetsnazKaz
DO NOT STEAL, TRACE, OR REPOST AS IT CONTAINS MY SIGNATURE