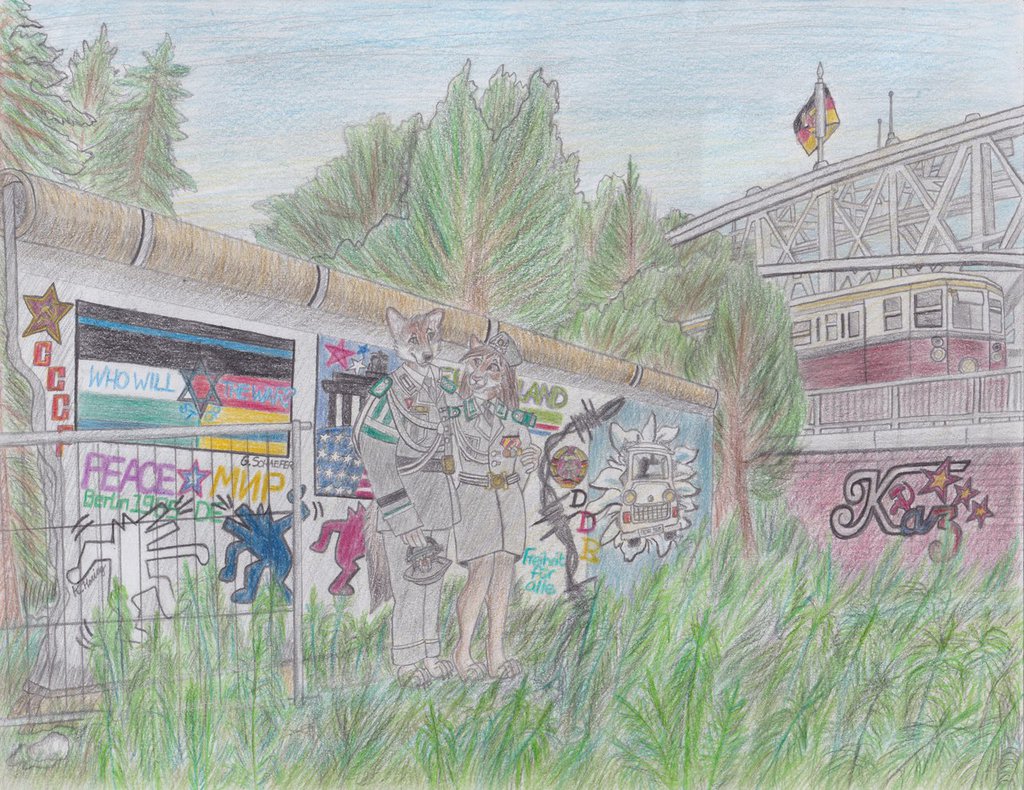 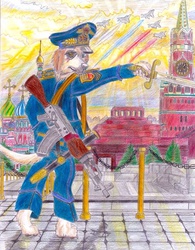 "It's always the small people who change things. It's never the politicians or the big guys. I mean, who pulled down the Berlin wall? It was all the people in the streets. The specialists didn't have a clue the day before." -Luc Besson on the fall of the Berlin Wall, 1989

( Backstory of the picture)
Daylight was inching forth; the sun peeking behind the trees to expose the pale blue sky. The trees awoke from their midnight slumber and the city was silent. The humble folk of Berlin still slept in their beds before the workday had officially started. Nobody even thought of the daylight, nor the trees. A playful David and Regina skip through the woods together in their uniforms, like young children, without a care in the world.

REGINA: Come on David! Keep up!

David pants as he is not a fast runner

REGINA: giggles You're such a slowpoke sweetie! Here, I'll hold your hand~

They hold hands and walk deeper into the woods

A few minutes pass and the two run through the dense brush of the woodlands, gently tickling their feet as they run past. The lush green grass and tall trees create a sea of green as far as the eye can see. Eventually, the couple stumble upon the last remaining piece of civilization in their sights; an abandoned railyard sitting atop a silver bridge behind a large brick wall, and surprisingly, a more recent addition, and intact piece of the Berlin Wall. It's facade was emblazoned with bright colors and images, each painting a picture of an average Berliner's life.

They prop themselves along the colorful wall, inching easily thinking the paint would smear their uniforms. It was dry to the touch, and the two spent their day here.

REGINA: Was this wall always here... I don't remember...

DAVID: I don't know...maybe the city wanted to discard it?

REGINA: Do you think others know of our "secret place"?

DAVID: I wouldn't think that the Ministry would even miss us...

DAVID: We'll be fine, this wall was probably discarded a while ago...

REGINA: Okay, I'll believe that for now, just to make sure, go check.

Regina sends David to go check for people in the dense woods, keeping quiet as not to draw a lot of attention to the both of them. He spends some time navigating the woodland and immediately comes back to a waiting Regina.

DAVID: I thought something might have happened to you... you were so quiet.

REGINA: I was worried about you too, sweetie, as you might not come back.

The two gaze upon the sky and listen to the sound of nature, the birds chirping, rustling of leaves, and felt the general tranquility of the place. Nary a soul was heard here, besides the two, despite its semi-industrial appearance. Mother Nature slowly took the man-made objects into her tight grip, covering everything with green.

REGINA: sighs I just love how the sky and trees look beyond the city...

DAVID: Yeah, it's just nice to get away from it all. The world needs more places like this.

REGINA: You know, I could spend the entire day here... fuck work, and let's just be alone.

DAVID: I don't mind; not a day goes by without you by my side~

He smiles to her, as they snuggle up closer together, his hand caressing her hip, the gentle touch of their faces amongst one another symbolized their true bond. God looked upon them and smiled, smiled upon such a beautiful sight like this one, devoid of wars, politics, and business. They saw the clouds open up and shine sunlight upon them. David looked up and said, "This is our own personal Garden of Eden..."

(About the picture and processes)
Here stands the [proud] David and Regina in an abandoned, wooded area on the outskirts of Berlin, in front of a slab of the Berlin Wall bearing graffiti from famous artists. (Yes, I made references to famous Berlin Wall paintings on this one). The image, itself is truly symbolic of many things, historical, religious, artistic, you name it. Made as a follow-up to Hinter der ostlichen Tore, (ironically, this is the picture I meant to post first, because it was older, but then again, it does not show the detail of the uniforms) it is its complete opposite, as it focuses more on the background rather than the foreground. This was quite hard to do, as it was carved almost entirely out of color (mainly green) and took a lot of time and effort from me. It was quite demanding. Also, I hid my signature here in a unique place.

TL;DR I don't want to waste any more time or character space for this picture. It was just miraculous for me to get into this one deeply.

Inb4 No lineart this time, sorry~

I really want some praise for doing this shit.

Anyways, Happy Earth Day to all of you on Weasyl and to the world.
(Pretty fucking late for Easter, dammit)