The Kremlin Guard by SpetsnazKaz 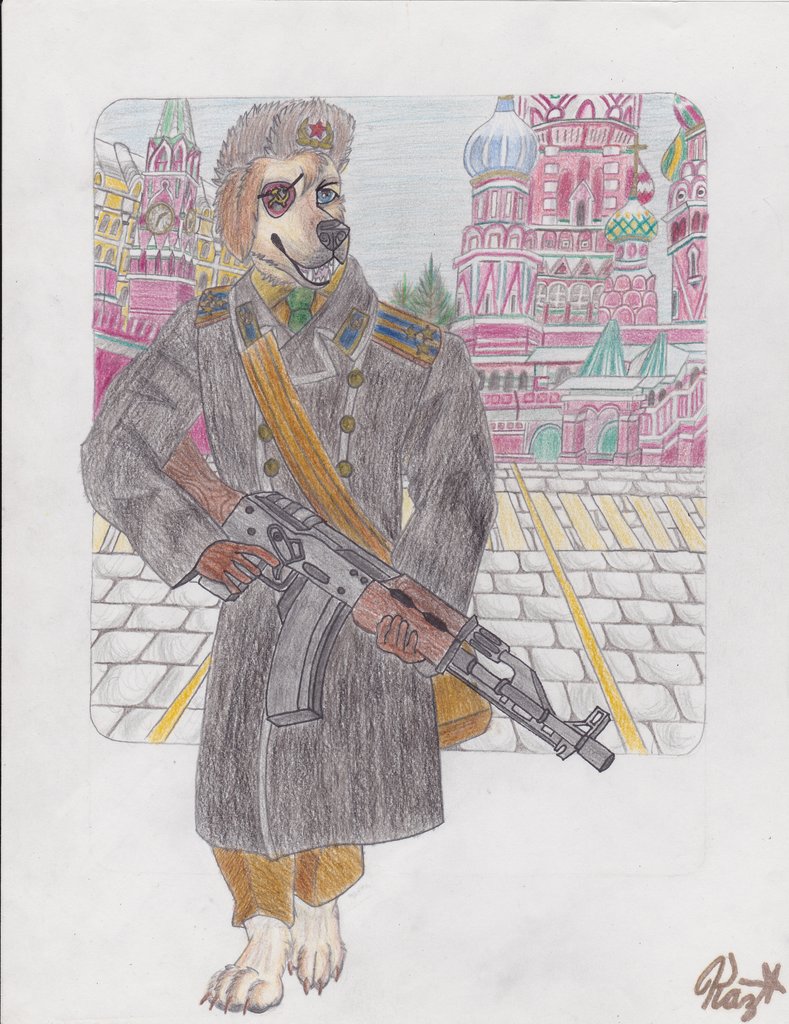 (About the picture)
This is my character, Mishkaryova Torchinovitch Krasnodon, (Мишкарова Торчинович Краснодон) my yellow lab character walking down Red Square during wintertime in his signature KGB Kremlin Guard coat and AK-74.

Having lived a human life for 6,000 years, he has seen the tragedies surrounding life and death in his homeland of Russia, the Soviet Union, and around the world. The epitome of a renowned veteran, throughout history he has seen massive human conflicts, and has even fought for some causes. More recently, he has fought in the Red Army since WWII defending the Motherland, soon promoted to the Spetsnaz GRU (hence the nickname "SpetsnazKaz") and eventually the KGB. Much of his missions revolved around competing with his former home, the United States, and the friends he had living there. Despite being a "commie," Kaz is a caring man who loves people of all faiths, races, and nationalities. He does not want anybody destroyed or conquered deep within him, yet had to face the harsh reality several times, in following orders that contradict his personal views. He has met his fair share of friends and enemies (and even got married) in his long life and continues to spread personal diplomacy the world over. The ultimate fear of world destruction has haunted him until his departure into the afterlife, (hence the version of him depicted) in which he faces enemies, old and new, against a new global empire of a distant future, thus earning him the name, "The Red Angel."

In other words, he is my own personal savior, my hero, my love.

(The process)
Messing up a few times, this picture was more fun to me than frustrating; I do not lose confidence too easily in my artwork. I know I am not the best artist ever, but I am personally satisfied with the outcome for my first colored picture in years. Much of the flaws in this picture comes with the coloring, but I am here to list them so I can improve.

Please critique, comment, and fave to help me improve!
Thank you. :)