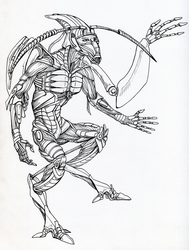 Posting some process on a character concept that has been in the works since September of last year (remember this detail from last Inktober? ). Literally the only thing giving me trouble was figuring out a decent color palette for him.

Top image is a basic, barebones simplified “colormap”. Proper proportions are still being figured out for him so it isn’t “correct.” Bottom image is something a bit more refined to show off his “alternate” colors when he’s inhabited by his symbiotic nanite hive Novitas. A little closer to how I want him to actually look proportion-wise (this was actually a sketch from September that I was waiting to finish after I figured out his colors).

I think I’m ready to make a proper reference.