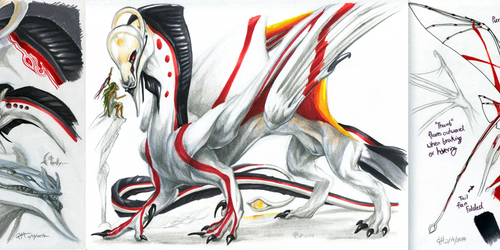 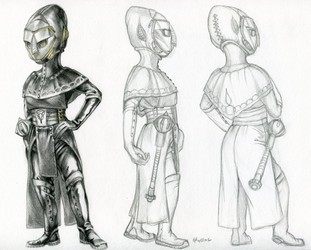 Next up on the list of concepts is Great Hornbill-inspired harpy Solphanae. I full admit I'm not actually done and I intend to do some more in-depth sketches of her at some point.

~Harpies in Alteir are varied in physical appearance, usually due to a combination of environmental factors and a habit that mana has on the evolution of species that scholars call the "arcane mirror effect" in which features, physiology and other quirks gradually translate to other creatures through generations, usually monstrous sapients (like harpies), fae or rarely magically-attuned humanoids. Sol here is one such an example; her entire coven look very similar to her and live in the dense jungles of southern Ciedan in the coastal region of Aernis Denya.
~Her race did not originate through natural or magical evolution but through a powerful curse that a demigod laid on a coven of witches for some forgotten but grave slight. A byproduct of this curse ensures that even though harpies can breed and develop their race, they must do so with human or elf males, usually through magic, trickery or violence. Those men that willingly stay with a harpy are universally shunned by their communities.
~These creatures as a rule are feared and loathed by most of the population due to their insular and haughty attitudes and often brutal method of reproduction. The only culture that has ever accepted these creatures were the tengu, and through a series of unfortunate and misbegotten conflicts, have also closed their doors to them in recent centuries.
~They are equipped with both natural and supernatural means to disable and kill prey, most notable of which are their complex songs that can confuse and enthrall, and their eel-like pharyngeal or "second" jaws (not illustrated here).
~Sol here was considered a runt by her sisters in the coven and summarily exiled for the survival of the whole. She is indeed somewhat underdeveloped and plagued with a frail constitution due in part to congenital sickness as well as being afflicted with a persistent, necrotic disease that requires constant treatment.
~Due to an altercation with a mercenary years ago, she is missing her right leg. Through the kindness and ingenuity of a gnome she met, she now has a prosthetic that functions nearly as well as her natural one.
~She travels with a tengu alchemist that is a member of the Black Doctor Society, a group of specialist field medics trained in treating those with horrendous afflictions, plagues and also the art of chemical warfare. He is also the doctor that has kept her alive all these years with constant treatment.

I'm going to be finishing concepts of said doctor as well as the conveyance they travel in at some point. These guys are actually among some of my favorite characters that we've developed, hah.