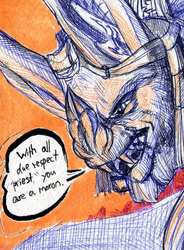 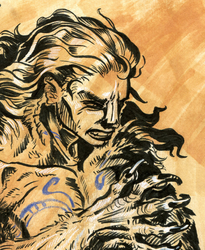 Electrium, a rare hybrid of an Aryean’tahr and a Tengu. He currently holds the most records and regional titles across Alteir in the strenuous aerial sport known as “Peril Racing.” He is a celebrity among race enthusiasts and a goal to be met and surpassed by fellow athletes. Here he’s seen presenting the final relay baton to a race adjudicator after another win.

Peril Racing (or spisk'kintesh in the L'tahr language) is an ancient sport that dates back to the pre-Tearing era. Invented by the elementally-attuned avian race the L'tahr, it was originally meant as long distance endurance training and trials for warriors and animists (those that directly controlled constructs and golems).

“Peril Racing” or simply the Perils, is actually a blanket term for many different sporting events that take place over the course of a couple weeks (not unlike the Olympics on Earth). There are agility courses, relays, multi-step and endurance races, and a few events even have magical hazards and traps that must be overcome. Terrain use, race courses and other particulars vary with each host tribe and each region but the one consistent is that almost the entirety of the sport takes place in the air.

Up until relatively recently there was a strict exclusivity among L'tahr and their close relatives Aryean'tahr as athletes (although the Perils are still open to the public as spectators). The first non-Auric that was allowed to compete 36 years ago was a Tengu samurai named Yojiri, who swept nearly half the contest winner titles. Parameters are still strict so even though the sport committees and trainers have relaxed certain racial requirements, fliers must be agile, tough and quick enough to even place in qualifying trials.