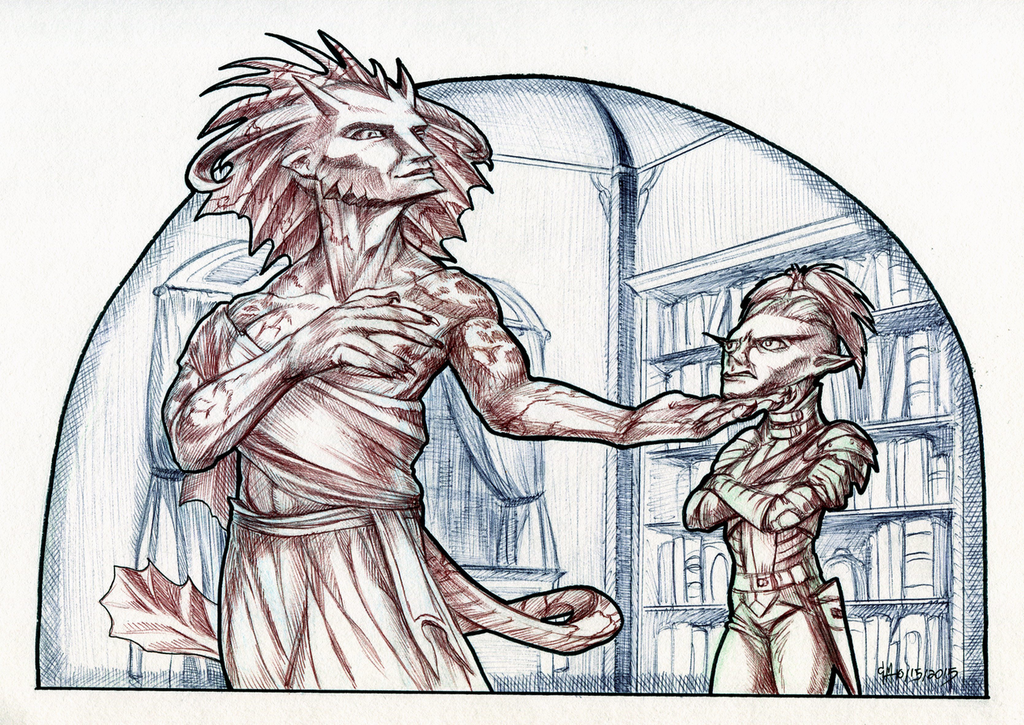 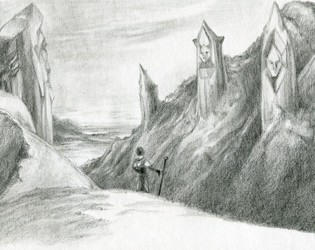 Crieg approached the villa in greater Quinloa, mixed feelings of sickness and anger in the pit of the gnome's stomach. It wasn't the first time she saw this imposing and opulent facade, but at least this time she wasn't half-conscious and dragged through the dirt.

She was ushered in easily by the guards and manservants as if expected. The horrid feeling worsened and kindled into proper hatred for the host of the manor, the very one she was here to see. She came up to the etched copper and bronze doors, the domain master's "right hand" standing by the door. The draconic, alien being inclined her head to Crieg ever so slightly and informed her she would have to relinquish her weapons before being able to meet with Xorothix on the other side.

Wordlessly the gnome ranger did so, knowing that quibbling would only delay her and prolong her animal companion Sparrow's unjust incarceration. After divesting herself of her weapons she was allowed to enter through the ostentatious double doors into a surprisingly modest room compared to the rest of the villa. It was still all marble and skillfully painted plaster with expensive and tasteful furnishing, but it was all there for the purpose of being paltry in comparison to the figure standing in the center of the room.

The figure in question was not especially tall of stature, but he didn't need to be. He strode slowly towards his expected guest with an air of satisfaction and confidence, an uncomfortably predatory smile on his lips. Crieg, for all of her self-control, could not help but narrow her eyes and tighten her mouth in revulsion in as she spoke, "I am here before you, again. I know you wanted this all along so lets just get to it. I'm...here to shorten my dept so I can get Sparrow back. I'm willing to...work for you, for a time. As per the original contract agreement that you outlined." Each word she had to work out with difficulty through the lump in her throat.

The imposing draconic figure smiled softly with his teeth as he came up to her and started circling as they talked, his voice both hard and silky, "Will you now? I did mention you always had a choice, but this is one of the better ones for you and your...companion. Sufficient restitution must be met for what you did to my mining operation, after all."

She scowled, her lip curling in loathing as she tried to keep her tone level, "Yes, right. I didn't want my friends to start getting too nosy and me risking violating the contract so I'm willing to do this. That's all. What...what must I do to get Sparrow back and lift the contract off me?"

Xorothix purred deep in his throat, " Mm, that's good to hear that you have decided to come around. Considering you've cost me valuable time and resources to fix what you did, I think you'd do well as my new taskmaster in the mine, with all of the required authority associated with it. The workers need to be motivated and monitored, so that will be your job for the interim. I shall outline your duties forthwith..."

Considering everything else she'd already been blackmailed and coerced into doing, at this point she just wanted to get this new "job" over with, hoping a dragon like Xorothix would keep to the contract, at least for Sparrow's sake.

's crime lord dragon Xorothix and my do-gooder gnome ranger Crieg. There was quite a lot of story before this and subsequently afterwards, but outside of illustrating an entire comic, I had to keep it focused. I thought this scene was evocative enough though! I actually had this done last night but I didn't have the time or mindset to properly type out the dialogue (most of which taken directly from the roleplaying).

Respective characters belong to myself and the spouse, while Alteir, the setting they reside in, is my initial creation.