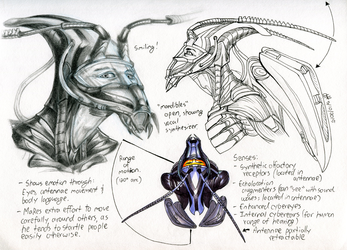 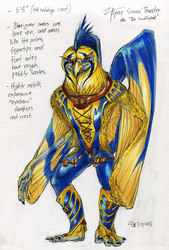 (I definitely recommend clicking on the image to see most of the details properly!)

Compiled reference sheet I worked on and completed last week for a character that is still somewhat in development and yet another character that populates my ever-growing Alteir setting. His heredity hales from the rugged wasteland of Sorensia, although he was not born there. His lineage on his father's side traces down generations from the "High" Sorenese, whereas his mother while still of the same race as his father, is a transplant to the region of Calythia. His formal given name is Kizurri Shuhazan Adamaz, the middle being his ancestral clan name and the appellation at the end his chosen profession that translates from Sorenese simply to "bladewielder," which in their culture means a mercenary, pirate or bandit outside of the employ of the formal military.

Some other stuff about him:

I'll be adding more stuff when I submit him as a dedicated character soon, but there you go. I quite enjoyed working on his visual development, and once I pinned down his specific features everything fell into place quickly.