The New Normal - Issue One: Hiding - Page 4 by SonicSpirit 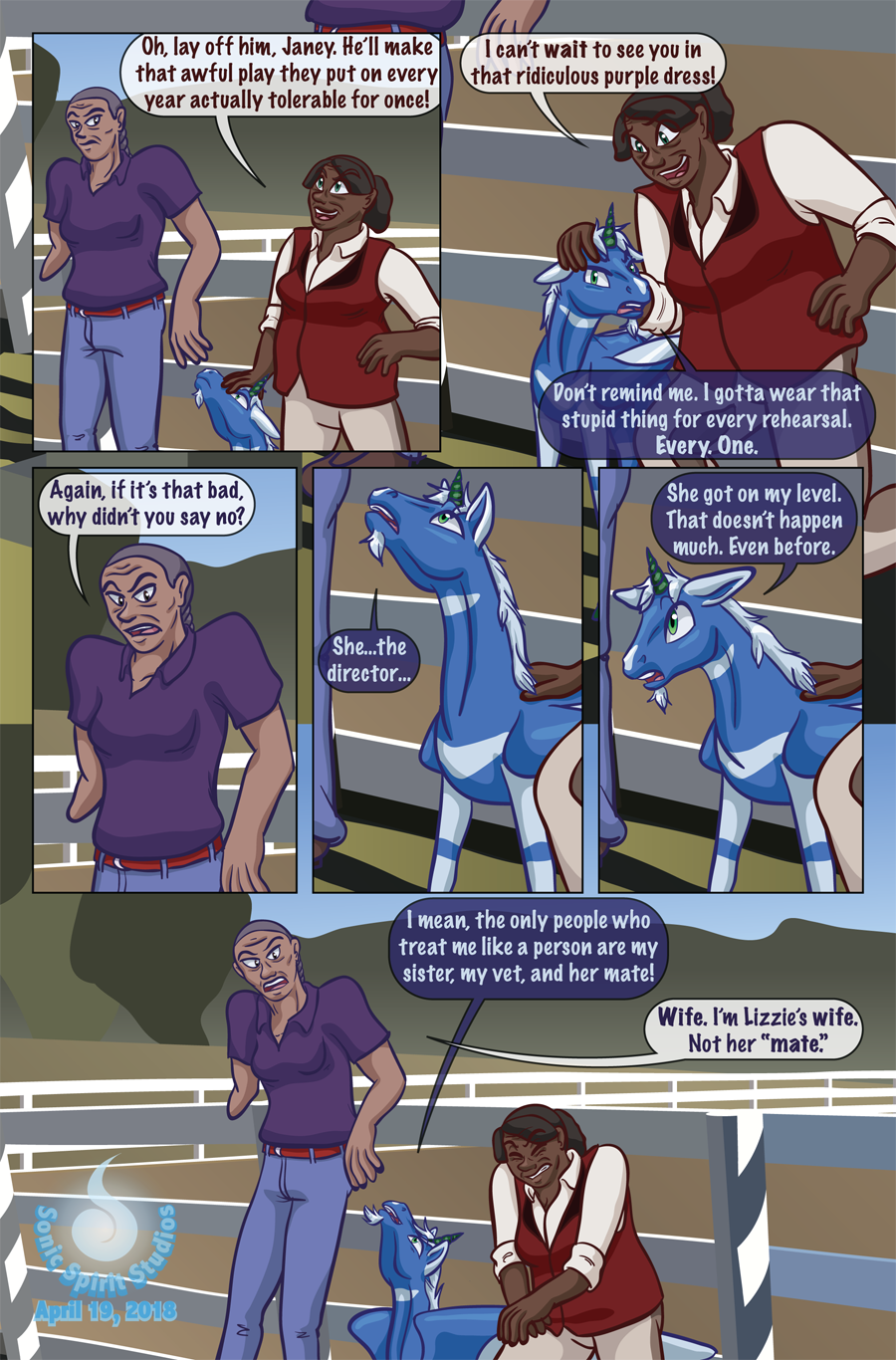 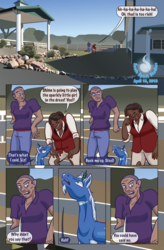 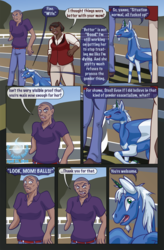 Wait, there's a play? What play!? Why wasn't I informed! I thought they were just putting him in a dress for their health!

Poor Liz, being a vet's hard enough without joint pain. Or your mate--sorry, Steel, wife, getting snarky with your clients. Oh, also he's a unicorn. That's neat.

BLOCKING WITH HEIGHT DISPARITIES IS A FUN TIME. I mean, Shine's about two feet tall at the withers. He ain't big.

I feel like arguing about proper word choice is a Big Thing between Shine and Steel, and I'm not sure I have that properly portrayed. Well, I'll hafta figure that out.

Edit: Twitter Musings
Okay, this is relevant to the page! Let's talk about this here! So Shine and Steel are meant to have a tense relationship, for the very good reason that Steel thinks whatever transformed Shine might be contagious. I probably don't portray this well, because I super love Steel.

In a scene I'll need to show in flashbacks (and therefore write), back when they met, Shine was very adamant about correcting Liz and Steel on terminology about himself.

Which, I mean, he didnâ€™t need to explain to a vet what a pastern is, but that a unicorn's horn is an alicorn, and that a winged unicorn is also an alicorn were probably not things she'd already learned.

But being repeatedly corrected by someone she's scared is contagious put Steel's back up. Bonus points that he was doing nothing to contain this possible contagion. Liz insisted that Steel be nice, so she will, but that also means she'll be a bit terse.

So using the proper terms for things is kinda A Thing between them.

Which finally leads me to My Point! I, and therefore Shine, don't/doesn't like the word "Wife." It doesn't mean "beloved person" to me. It means "property". I understand that that's not how most people hear the word, so that's fine. But I love the word "mate."

So when Shine says that Steel is Liz's "mate," he means "beloved significant other," and Steel hears a term that, to her, trivializes their relationship and is Australian slang for friend. When Steel corrects Shine, he hears "property."

Anyway, that's meant to be the undercurrents of a two-sentence exchange that has about two panels of relevance. YAY.

I just love how different words have so much different emotional context to different people, and how vastly different the meaning of the same sentence can be depending on who says it. I mean, it's frustrating sometimes. I've had wayyy too many conversations that never got to the actually interesting part because I had to keep running back on the WTF the other person was meaning by what they were saying, because both of our understandings of the language involved was so wildly different.

Conversations about gender often go this way, because everybody has such wildly different jumping off points. You can know the academic meaning, but then you get this wild mix of perspectives, experiences, and time-periods when an individual learned stuff, and it gets CONFUSED.

Trying to explain that I'm a trans guy to a gay teacher who did a lot of activism in the 90s was SUCH a weird experience, because he meant well, but his understanding was so ass-backwards. His entire point ended up being that he thought bottom surgery was a bad idea because it could drastically reduce erogenous sensation in genitals, and humans are sexual animals. But it took so much defining and back-tracking for me to find out what he meant by some of the horrible things he was saying, I never got to try and start teaching him that trans dudes aren't lesbians. Yeah. THIS WAS OUR STARTING POINT.

Language is weird, yo.