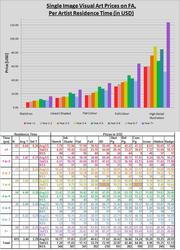 More Data from the ZTS Survey on Artists prices [2013]

Here is information pertaining to where Artists on FA post their commission information. Journals win out in first place, with submissions coming a close second. Interestingly Userpage and Commission Tabs are tied for third, which is surprising because I almost never see anyone using the Commission Tab.

When price data is looked at the top four options [Journals, Submissions, Userpage and Commissions Tab] tended to be mostly similar. Artists who did not post their commission data anywhere on the sight tended to have lower pricing overall, while artists with Independent Websites had above average pricing.

The "Other" category had startlingly higher prices compared to the norm, although what the "Other" category is, is a bit ill defined. A few people who used that term explained it was because they used "Commission Forms,", but the majority did not offer any explanation.

I was a little bit surprised by the fact that there was little discernible difference in the pricing of the top four most popular options. I also expected Commissions Tab to rank much lower.