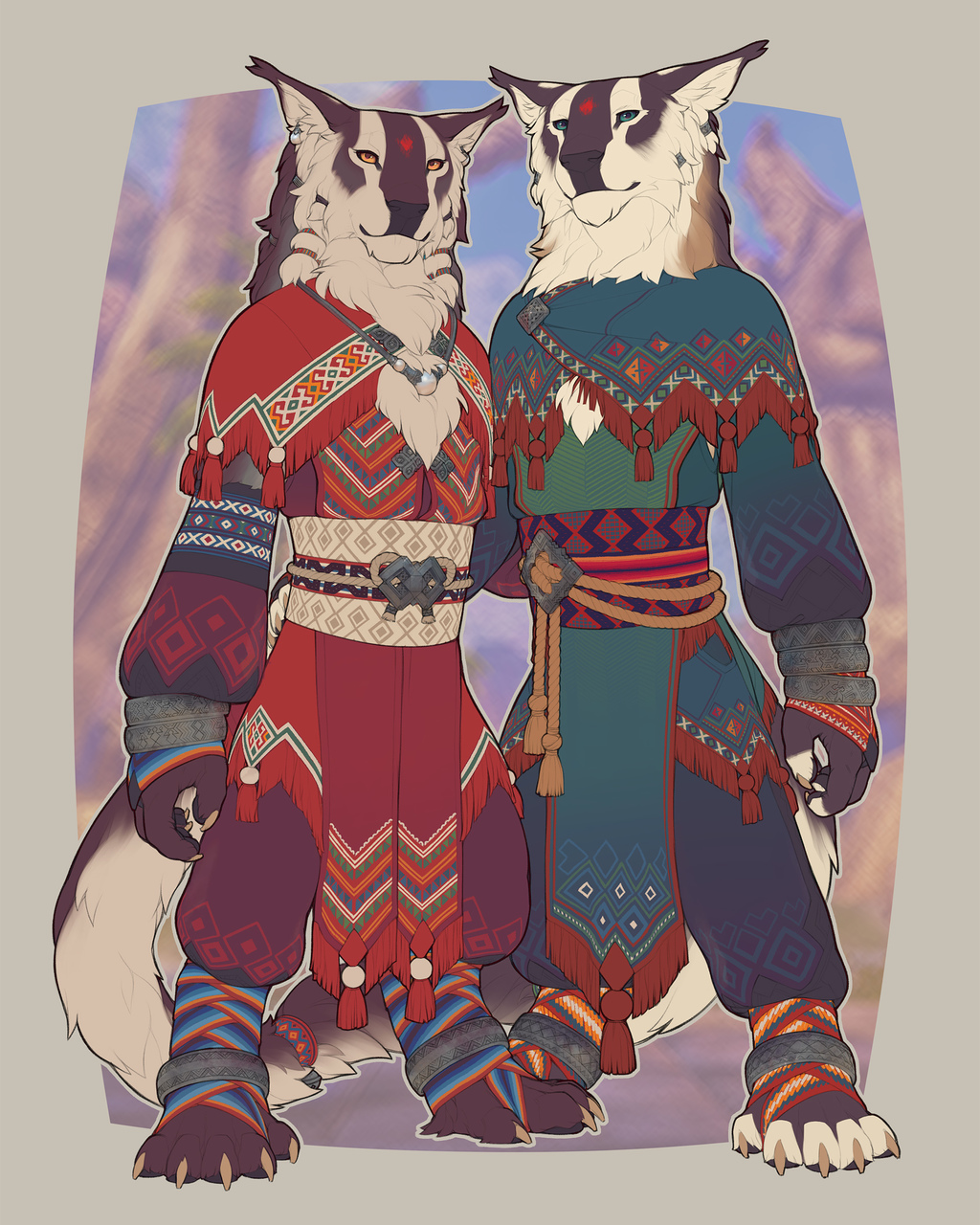 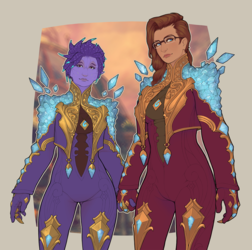 Here they are, all dressed up for their wedding. Wish them well!

Most Ando are part or subjet of a clan--of which a sufficiently large town may have multiple--and may not marry a clanmember. A clan, besides the original lineage, is further comprised of individual households and sworn compatriots. The surname taken in marriage is decided by which household is the richest; a value carefully calculated by a financier. This is usually--though not always--also the household in which the new couple will live for at least four years.

Formally, to begin the engagement ceremony, the eldest sibling (or cousin) of the bride-to-be, accopmanied by the mother, offer the family of the future groom a Korinth quail - the plumpest one they own (or can get their hands on). Accepting this offer means sanctioning the marriage. The groom's family then usually give fruits and a bottle of yam wine in return, from which they now usually first toast to the future merging.

It is also acceptable for either bride or groom themselves to offer the gift. It is considered sincere, though informal. Still, if they are accepted, gifts are exchanged and toasts are given. This may lead directly into the following tea ceremony.

(Otherwise) Soon after on an agreed date, the groom and his family will visit the bride's parents at their home for the ritual tea ceremony, during which the accompanying families wait outside. After a formal intoduction the dark tea, made from dried jolmat mushrooms and kiřis leaves, is brewed and served by the mother. The father will question the groom's committment; he will respond that it is absolute. The bride (who would surely be trying to listen from an adjacent hall) is then called in and sits opposite of the groom between her parents. Her mother pours her a cup, from which she drinks half, and the rest is finished by the groom. The ceremony is complete. They proceed outside (or to the dining room) where the rest are waiting (provided this has been entirely formal and planned) and finish the occasion with a dinner--the perfect opportunity for the eventual relatives to get to know one another. The future couple sit next to each other at the end of the table or arrangement, with their parents at either side, followed by married ralatives, then unmarried and young ones. The date and shrine for the wedding is agreed upon.

Note that a wedding ceremony may not be held during religious holidays or fasts or the birthdays of either bride or groom.

Before the wedding, each party will elect a ceremonial aide from their family - normally their eldest sister or female cousin. This chosen will first aid in their washing in a ritual manner with herb-infused water meant to ward off evil spirits and, of course, to smell nice. Afterwards, they will aid in dressing and fastening the wedding sash.

The ceremonial outfit worn by the bride is called "Jó'a mřotam". The base is an airy red or maroon dress overlaid by a shawl and split scapula, accented with frills, and commonly paired with contrasting trims and spats of blue or green, and bound at the waist with a wide and intricately patterned sash called the Jól. This belted sash bears the pattern and colours of the clan and is usually passed down through the family. Fashionably she also wears a pearl necklace, with at least one prominent center pearl.
The male counterpart is the "Jó'a mřokei", colored blue with commonly red and green accents, and a solid scapula, bound by his Jól. Both wear metal bracelets - at least one on each limb, though no more than one on each foot - and a band towards the end of their tail. It is usually fashionable for both genders to wear bindings and adornments in their manes, and so naturally on this occasion they are especially opulent. (Males' are more conservative.)

The wedding ceremony, held at the local temple, begins at noon. The high priest and two monks lead the procession to the shrine. Behind them are the wedding couple, followed by their opposite's chosen. At the first shrine the priest summons the spirits of the clan ancestors, aided by the monks who waft around thuribles. The couple bow at the altar, greeting their ancestors. They then turn to the chosen, who hand them the gift boxes their families have assembled. Each box contains coin (which the shrine will take as donation), a sprig of donem flowers (which alludes to the many cubs they wish to have), and fruits or berries; usually kiřis, sometimes Korinth plum. These are opened and curteously placed on the altar by the couple, displaying the prosperity and well wishes of each household. Naturally, the spirits accept (or maybe a grumpy grand-grandparent protests! They are usually told off. It sometimes happens.). As it goes well, they proceed past the shrine towards the wedding grounds, each bowing as they pass.

Here the priest performs a small rite inside a larger housed shrine. The couple sit on the precipice, facing out. They are blessed by the priest, who paints a dot or diamond between their brows. The color can vary by region or clan but is generally red. Now they rise and face each other. The priest holds forth the platter of dye in which they dip their right palm, and then hold the opposite hand of the other. Finally they bow, gently meeting their foreheads to the cheer of the audience as they are now officially wed. From now on they will wear matching bands on their tails to signify their coupling.

The wedding party is usually held elsewhere either that night of the following. There's "Čamet Sat" baked by the clan matriarch and her family, fine food, drink, gifts are given, speeches are held, dance and song and hopefully a great time for all. Married participants usually end up boasting about their own wedding (nights) while the younger play games or pull pranks, often on the newlyweds. This reveling usually concludes well past midnight, with the black-outs spending the night.

It is customary for the couple to send a large gift to the household they left upon
their first anniversary, to show they are doing well.