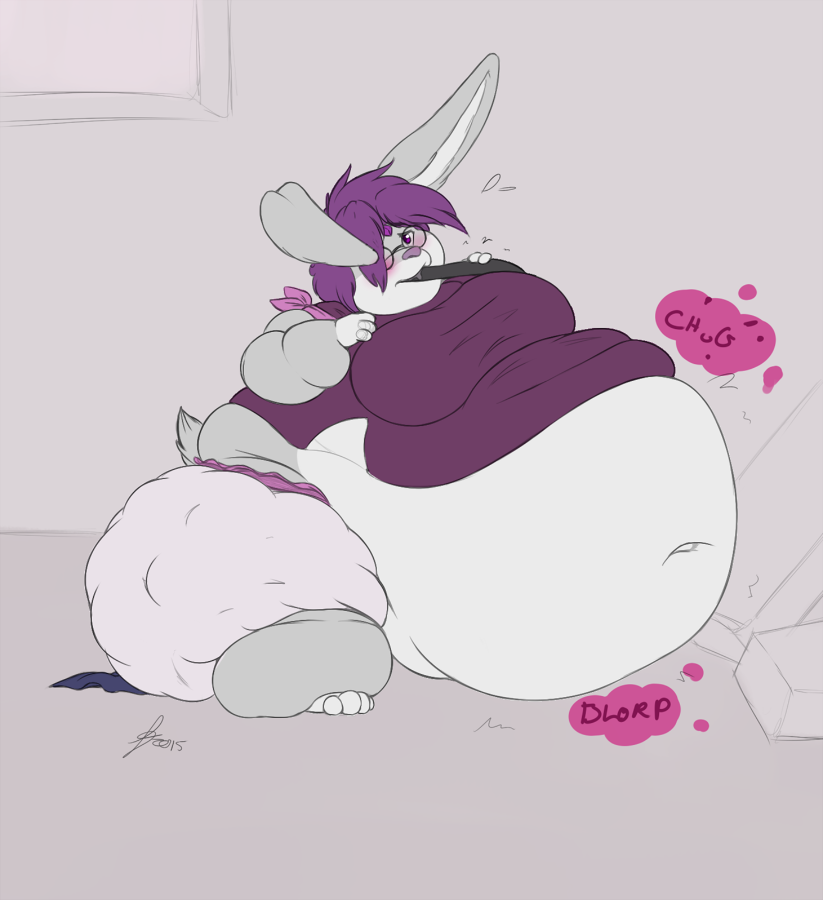 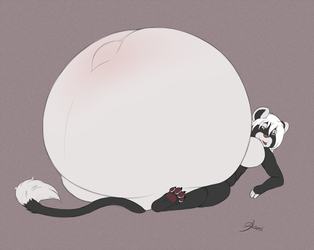 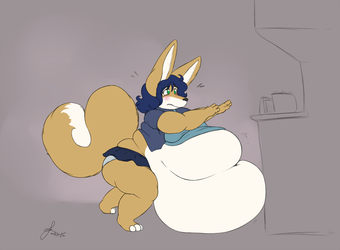 Kitsuna had never really been as big as she wanted to be. Having become a lapine shortly after the Splinter she quickly found she was the 'runt' of the litter. Neither as tall nor curvy as her sisters (both younger and older). This was something they tormented her about endlessly, never letting the poor little bunny girl forget her place - at the very bottom of everything.

School offered no respite from the endless humiliation either and a bed wetting girl, forced to wear diapers beneath her standard issue school uniform would soon find herself ostracised from the community at large. With a few exceptions. Rather chubby dragon girl and a pig who looked more like a waterballoon on legs than any girl Suna had ever seen quickly became her best friends, they were all nerdy and they all had their secrets. But sitting beside these slowly swelling girls Suna couldn't help but feel jealous of their size, their curves. Even if that was the very thing that got /them/ outcast as well. She felt that even if she was bullied for being fat, she would at least have /something/ to be proud of. A stomach that wobbled. A bit of weight. A bit of size with which to fight back at her sisters.

And so the lapine girl formed a secret ritual. Every lunch, ten minutes before the bell to go into class, she would haul every scrap of food she had found over the day or stolen from the cupboards at home into one of the empty locker rooms and gorge herself on it. She would eat until her stomach hurt, until it had become a basketball sized globe that stuck out in front of her and despite the strange looks she received she wore her almost gravid looking tummy as a badge of pride. Until at least, one fateful day.

Kitsuna burst into the locker rooms, sweat running down her forehead. She let her heavy backpack fall to the ground in the gloom and slumped down on top of it, panting heavily. She'd started gorging about 50lb ago and it seemed like she needed to bring more and more food just to keep her poor tummy sated and stretching. She watched it rise and fall, wobbling with every panting breath she took and so mesmerised was she that she didn't notice that she was not alone.

"So you like to eat, do you?" Suna's head whipped up towards the new sound. Crystal, an auburn and white coloured bunny stepped out from between two large, metal canisters that weren't there yesterday. Kitsuna blushed. Crystal had everything she could ever want in a body, she was tall, busty, had an ass. She was perfect.

"D-doesn't everyone?" Kitsuna replied back, her eyes lowering towards the ground.

"Pfft, not as much as you and your fatty friends." Crystal replied, pushing a toe into Suna's flabby stomach. "And to think you had the audacity to try out for the cheerleading team... and what's worse, they're letting you in! Well not when I'm done with you. When I'm done with you the whole school will know just what you are! A big, fat hog! Fatter then your sow and dragon friends put together!"

The news that her try-out for the cheerleading team had been successful was overwhelmed by the cool metal hose that Crystal pulled out of the darkness, a strange machine glistening at its tip. She didn't have time to make it, or anything out. Crystal pressed down hard enough on her stomach that she squeaked in pain and the hose was shoved into her mouth, metal fingers extending and clamping around the insides of her teeth. Shocked, Kitsuna fell to her back, trying to tug out the invading hose with no success. Crystal just laughed and turned to face the canisters.

"Yeah, stole these from the cafeteria. Apparently next month is 'Ice cream month' or something. Free icecream with every meal for the month - I wonder how the school will feel about you having glutted down the entire stock of soft serve!"

With the flick of a switch Kitsuna's fate was sealed. The soft serve pushed into her, her cheeks swelling momentarily before the onslaught was too much for her mouth to contain and it started pumping directly down into her stomach. Her chubby little muffintop immediately pushed outwards, swelling and blorping noisily as it stretched her uniform top. Kitsuna made a low, whining noise. She wanted to ask Crystal why, why would she do something like this?! All the other rabbit had to do was ask and Suna would surely have pulled her application. She wasn't all that interested in cheerleading anyway, she only went to the try-outs because her mother made her. She never thought she'd be accepted.

The sound of tearing fabric pulled Suna's attention to her dying skirt, the once more than adequate clothing now falling in scraps around her cellulite inflating ass. She struggles to get to her feet with steadily growing limbs, new rolls of wobbling flab appearing as if to slow her down. Everything felt thick and heavy, but nothing more so than her massive stomach. When she finally managed to get to her feet it slumped onto the ground in front of her, just that small feat left her panting and exhausted.

She struggled to remove the hose again and Crystal snickered.

"We've got a whole second tank to go through after this."