The Meeting by sl1

Another one of my adventures, in my travels I found an interesting facility. It was like any other building that was used for advanced research, completely bland and unobtrusive, with some extra security if you knew where to look. Exactly the kind of place I like to do my shopping at.

Slipping into these places isn't easy for most people. They don't have the advantages that I do. Being what I am, who I am isn't easy to explain. If you are lucky enough to run into me, I am usually in the form of a drake. Though what I am made of is anyone's guess, but I don't play by the same rules of life and physics that you do. This reality isn't my home. But enough about me, what I am really isn't the subject of this.

I like to collect things, mostly technology, but whatever grabs my interest at the time. Mostly to stave off the boredom back at home. I like to tinker and explore, so the more complicated the better. That's what I am up to today.

These facilities are always mazes, with labs, offices, and storage rooms all over the place. It seems like the people who design them make no effort for the layout to make sense. Stalking through the labyrinth of the building, I notice various signs, "Viscous fluid research", "Biomimetics", and "AI Test Suite 3". It is a peculiar mix of technologies.

I see a room marked printing, and my curiosity is peaked. Inside of it there are a few transparent tubes, roughly half a meter around and partially filled with various colours of gels. In one of the tubes, there is a partially constructed figure, up to about the belly button region suspended in the gel. Every few seconds a small amount of liquid is added to the tube, and a laser traces the incomplete form where it meets the top of the fluid, seemingly creating a hollow figure with extremely thin walls. Some sort of anatomically correct balloon? It's an interesting process, but I think someone may notice if I tamper with it. Might be something to come back and research later.

Continuing my wandering, I arrive at a freight elevator marked "Access to storage ONLY". Storage areas are always good to me. Lots of forgotten things and anything that isn't forgotten but disappears is usually written off as misplaced. The shelved ideas that get put away can also lead to some interesting insight into whatever is being developed.

The first few storage rooms are uninteresting, mainly containing ancient test equipment, and expired supplies. Further down the corridor I spot a fairly conspicuous door, notable for having an electronic lock and having a placard indicating its purpose, "Material Reclamation/Prototype Recycling". A quick touch on the card reader and it understands what I want, releasing the door with a light click.

On the inside are rows of shelving, containing plastic boxes filled with blue goo. Some have visible sections of thin material suspended in them, others containing much more obvious hints of what they once were. Each of them labeled with an ID, a colour group, test status, and recycle status. Most of the boxes close to the front of the room were marked with recycle status "Agent Added". Moving towards the back of the room, I notice a box with what looks to be an intact specimen. The label says, "ID: 0800200c9a66, Colour Group: Blue, Test Status: FAIL, Recycle Status: Scheduled – 10.90.30". Pulling the box out, I had misjudged the weight of it and sent the box slamming to the floor. I muttered to myself, "Damn it SL, stuff like that will make this a lot harder. Good thing this place is deserted tonight." Getting back to investigating the boxed specimen, I noticed it is fairly detailed and resembles something like a female fox. The proportions given to it are closer to what a male would idolize rather than a normal woman. While I was studying it, one of its eyes began to open.

With a groan, its other eye opened. "You don't look like one of the researchers," it said in a hushed voice. "Well duh, I am not," I replied. "So, are you some sort of sex toy or something?" I ask. "What? No of course not!" she replied, blushing.

"Do you even know what you are for?"

"Let's get you out of this oversized Tupperware; I want a closer look at you."

After undoing the latches on the side, I flip the lid of the container open, and she sits up with a jiggle. Now given the chance, I had to give her a poke to see what she felt like. Pressing a finger into one of her boobs, there was just enough resistance to tell that it wanted to keep its form, but then gently giving way to the continued pressure.

"H-hey, stop that," she grumbles, slapping my hand away.

"Had to see what you felt like. Figured you wouldn't mind terribly much, seeing as they are going to be recycling you tomorrow."

"What do you mean, recycled?!"

"Look around, I don't see anything like you still in one piece in this room. I guess whatever you are made out of is worth reusing. What kind of test did you fail, anyway?"

"The box you are sitting in clearly says you failed a test, look at the label."

As she leans over to try and read the label, I get a clear view of the barcode on her butt; it matches the ID on the label.

"That's clearly the right label, as it matches your butt"

"What do you remember?"

"I woke up in a weird chair, and some people in lab coats asked me to lay down in this, and then you woke me up"

"So… basically nothing, either they erased you, or something corrupted your memory. Which might be why you failed?"

"Why does it matter, if I am just going to be melted tomorrow?"

"A toy?" she asked while standing up

"A plaything, you know, something to amuse myself with," I say, stepping around her. Gently pushing her "hair" to the side to see how it behaves, "Sounds better than being destroyed to me, and I doubt you would do well outside on your own… I don't think you would exactly fit in."

"Yup, though, I think that was always the plan with you… Someone would probably end up owning you if you were good enough to pass whatever tests they had for you. Besides, wouldn't being my toy be generally preferable to becoming some sort of blue soup?"

"Gonna need you to be a bit more decisive than that… Though I will have some of my own tests to see if you are worth keeping too."

"What kind of tests?"

"Oh, I would rather keep those as a surprise… So what will it be, do you want to become my toy… or soup? Night is running out."

"I… I guess I could try being your toy."

"You can't really try, it's an all or nothing deal"

"Fine, I will be your toy!" She said in a frustrated tone of voice.

"Heh didn't think it would be THAT hard of a decision". I say, giving her butt a squeeze, and she let out a light growl.

"You are going to have to get used to that, as my toy. Time to go, give me your hand", grabbing her hand, I open a portal up to back home, and quickly pull her through with me. 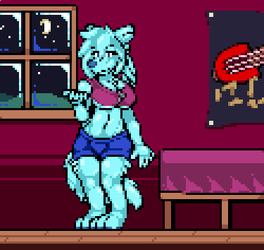