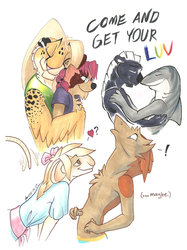 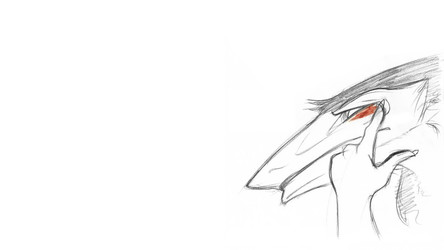 I decided to go through some of my old stuff, see how far back things went. While I know there are pieces earlier than this, I cannot find them. Also there is a gap in the middle which, sadly, is empty not for a lack of work, but because that work was lost.

There's been a lot of surprises while digging through history. I was startled at the jumps I've made in quality when I knew I didn't draw much at all during those years. The jump from 1998 to 1999 is the most drastic, as I went from what amounted to a bland rip-off of Balto's style to making a serious attempt at digital painting.

The second surprise is how inconsistent I've been. Part of this is medical, but the lion's share, I must be honest, is due to lack of practice. Many years I only made a handful of drawings -- sketches included. I seem to ruminate on stuff, then let out all the mental practice in one great drawing a year, but the rest is crap. I'm getting better at this. I'm drawing more, but I still have a lot of inconsistency I'm working to stamp out.

My art has gotten more diverse as time goes on, thankfully. I'm starting to poke outside the world of furry to other subject matter, other styles, and other mediums. I used to do watercolour, and I'd like to get back into that.