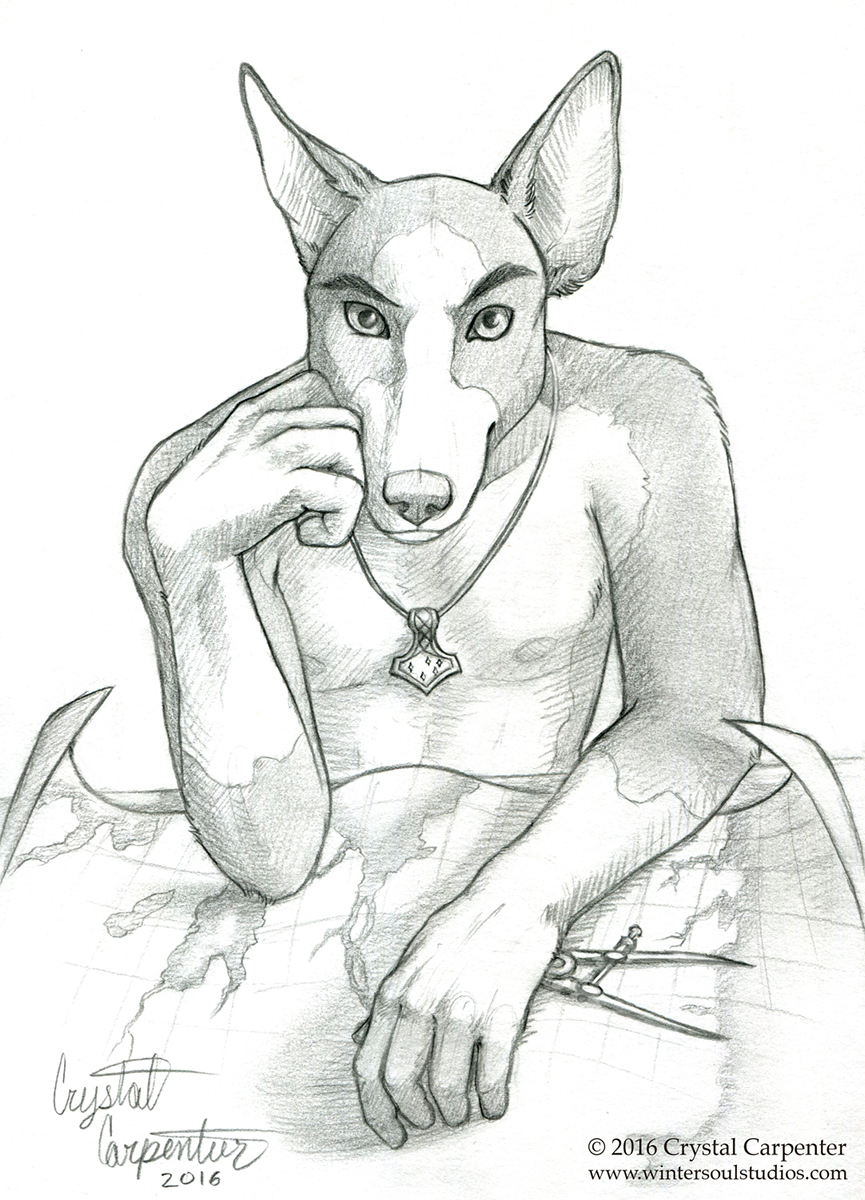 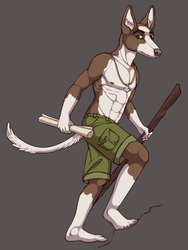 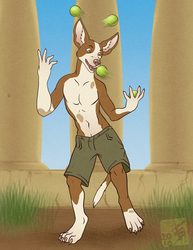 Portrait of Duenner, an Ibizan hound. Denizen of the colony living on the exomoon Kopno. And a short story:

That day, only a dozen students, a professor and a research associate occupied the warren of shelves and various alcoves of the Kupina University library. Two slim bodied, erect eared canids sat within a Map Room, a side alcove with only nose high dividing walls and no ceiling, Only the sky light brilliance of the vast arched ceiling overhead bled light upon the table.

Selig was about to stand up and leave to fetch another map when the Professor heard a snort ahead of him.

"Who wrote that?" Came the abrupt observation from the older Associate.

Selig looked up, observing Duenner seated across the table. The brown and white sight hound gazed back at him, close fingered fist docked against his muzzle, eyebrows unevenly arched in a nonplussed expression. Draped around Duenner's neck was a Mjolnir bestowed upon him when he was a teen.

Duenner's left arm was resting on a two decade old map of the Southwestern Quadrant. A stretch of the Pampas coastline where they hoped to find a suitable location to site a communications tower. A compass divider lay by his left elbow.

Selig replied at last, "Whom and what?"

Dunner's left forefinger pointed to the center of the map. "This caption. With a so called warning."

"Here Be Dragons?" Selig chuckled, "It's an old term for a map maker's sense of humor regarding unknown territory."

The brown and white sight hound shook his head.

Selig leaned forward, focusing at the region Duenner was pointing at. "Nowadays it refers to map errors. All that arcane mapping software tends to stitch together old satellite databases in strange ways."

It was Duenner's turn to chortle, "Not the Dragon caption. Below it. Someone inked an addendum to it. A peculiar style of writing that I now happen to recognize. It reads and I quote, 'Here Be Dragons. And beware the little ones in burrows that bite!' "

Silence drifted through the Alcove.

"Inked no doubt," Duenner continued, "by a then grad student after his first expedition to the Pampas. A student who ignored my warning not to stick his hand into a burrow. And received a nasty bite by a Teal lizard."

Duenner watched the ears of the white sighthound, seated across him, flush briefly.

"I guess I learned that the hard way, " Selig replied with splayed ears.

"The map needs a minor alteration," Duenner said, as he picked up the pen and began revising the caption.