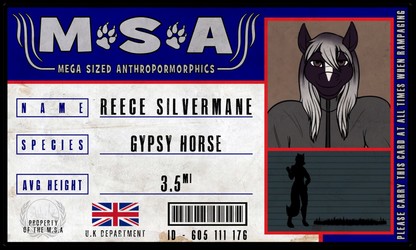 As the 8ft tall horse kneeling down the on lookers saw the thick strands of muscle contracting as the tall being grasped the chains the lifting the hefty chains as it was mere rope. Pausing he smiled the camera and then tighten his grip around the metal and stood firm. He nodded signalling he was ready.

Engines hummed into life, each with a fearsome growl as the driver's revved their machines. Each one of the trucks generated over 100 horsepower as their owners revved their engines up. The titanic equine braced his shoulders and stood up straight before both vehicles in a flurry of exhaust fumes they absorbed slack and after a foot both stopped.

Wheels churning as all 8 spun struggling for the grip needed to shift the equine stood unaffected as both engines growled and snarled as he held them in place, wheels digging holes as they made what seemed like a futile effort to dislodge the horse. " Huh...I expected more" Reece said his a playful chuckle in his voice as both engines belched smoke before grinding to a halt. "So you boys need some help getting these unstuck ?"

So some fools under estimated just how strong Reece was, those to little toyota hilux both failed to move him an inche before dying.