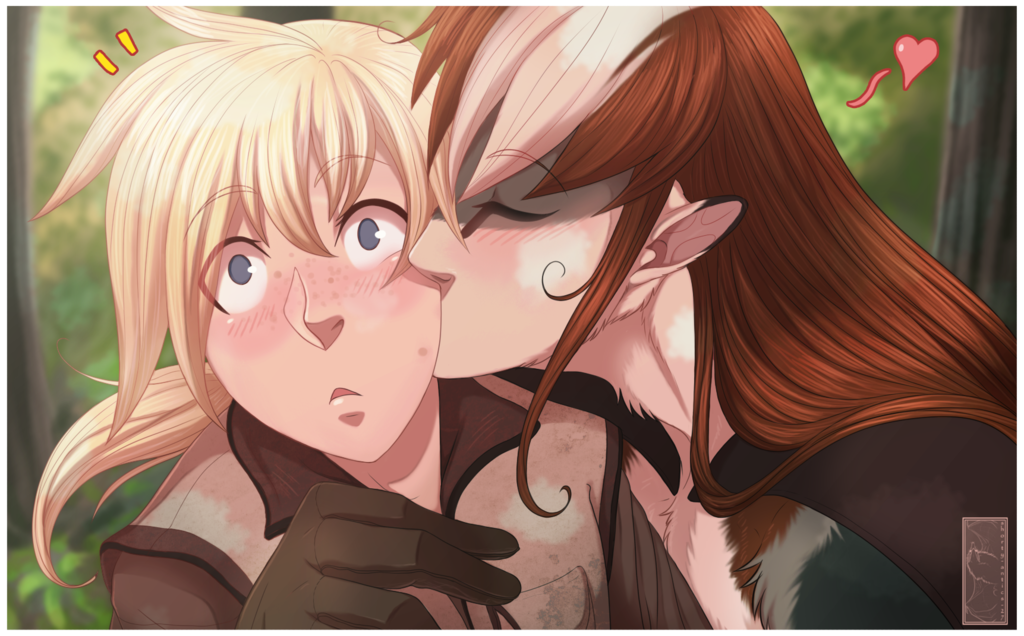 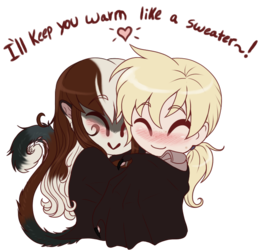 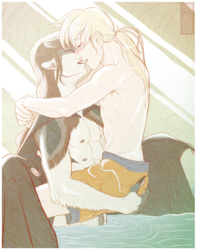 “Lucas, I have a question for you~”

It was a hot, sunny day when Lucas and Quill were outside cleaning and searching for eggs that Luke’s chickens had laid. Quill suddenly talking was out of the blue since they had been silent most of the time. Lucas, however, was super focused on cleaning that he almost didn’t hear Quill. Almost.

“Yeah?” he asked, scrubbing away.
“Do you happen to like guys?” Quill asked, pausing on his egg searching and smiling at the young man who had his back to him, cleaning the outside of the chicken coop.
“Yeah.” It was a simple response, and Luke still wasn’t fully paying attention to what he was answering to. But this response caused a much wider smile on Quill’s face.
“Oh~?” He moved over to Lucas’ side, tail swaying back and forth, and kneeled down next to him. He only paused for a moment before he leaned in and pressed his wet lips against Luke’s cheek.
“?!” Luke twitched, then froze, dropping his sponge to the ground. Quill pulled back and gave a small giggle. “I do as well~”
Luke’s face was that of pure shock. He turned slightly to look at Quill, his cheeks quickly becoming red with embarrassment. Quill got up, winked at him, then went back to searching for those eggs, pleased with what he had just done.

Lucas just sat there, dumbfounded and gently touched his cheek. Did that just . . . really happen?

Wahahaha! >D Yeah I couldn’t hold off and finished this piece first before the meeting picture. This was a NEEEEED. Also this started out as a comic but it was going horribly so just wanted it as a fully detailed picture. I’m much happier this way~

I’ll give some actual context behind the story some more. Better to explain than keep going with the story, since it’s hard to figure out when to stop. xD

This scene is about a few weeks after Quill has been living with Lucas and his family. At first Lucas’ family HATES Quill, so it takes a lot for Quill to convince them he’s fine and isn’t a threat. More about what happens for this will be shown later, but he wins them over pretty quickly. Lucas will still be cautious since all his life he learned that Volatikai were bad. Quill being very friendly and nice does get him to open up a little more, however.
Also during this scene, Lucas only had seen Quill as a friend. This kiss changes it entirely… but it also comes with some problems. It’s kind of a parallel to Quill confessing his love to Sol, like here: https://www.weasyl.com/submission/1168586/confession-of-love but still vastly different. Quill is just being a tease to Lucas, which is very confusing for the human boy.

First problem: Lucas hasn’t actually admitted to anyone before that he liked guys. He likes girls as well, but liking guys was his own personal secret since he didn’t know how his parents would feel about it. His dad, for one, has always told him to get a girlfriend but he’s way too shy for that.
(Lucas also has 3 raunchy romance novels. 2 being straight and the other as gay. Quill will find this stash at some point. ;P This will also be shown as a picture. Hurhur)

Second problem: he feels that it would be wrong to have any romantic feelings towards a Volatikai, since they aren’t the same species. He also feels that his parents would disapprove of it as well. But because of the kiss, he DOES suddenly get feelings for Quill, and becomes even more confused about this.

After this scene, Lucas will start avoiding Quill, sometimes making excuses to do other things and going to bed earlier. He has to figure out his own feelings and what he can even do, or if he wants it to be known he even likes guys. He already accidentally admitted it to Quill, so he’s stuck there.
This most likely will only last for a few days. Either he’ll give in and talk to Quill, or Quill will become frustrated and beg him to say what’s wrong. Their talk will most likely be rather emotional.
And then more fun things come out of it, which I plan for a future small comic. ;P

So I hope this all makes sense~

Gosh these two make me happy. <3