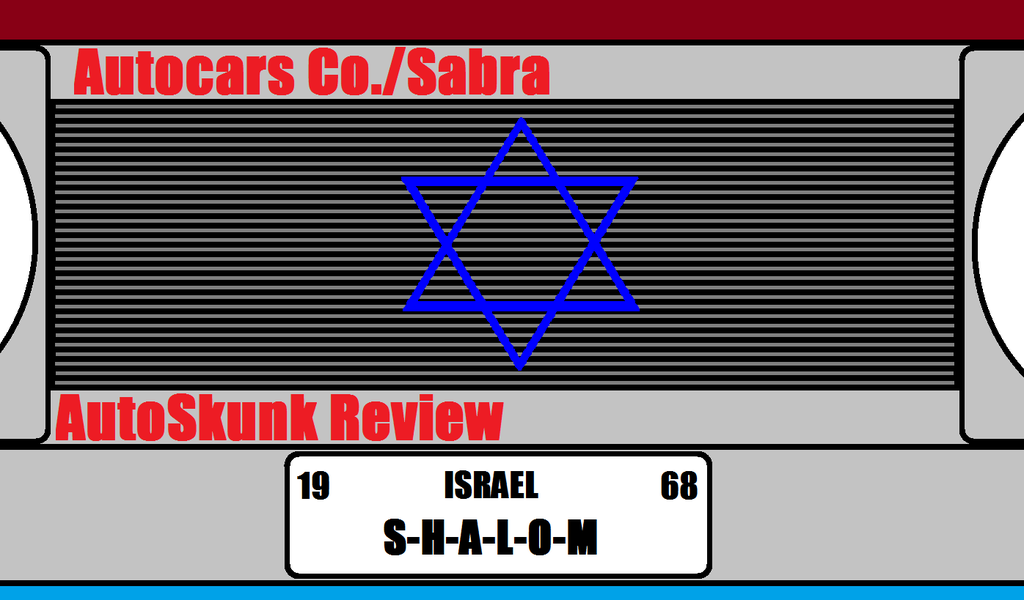 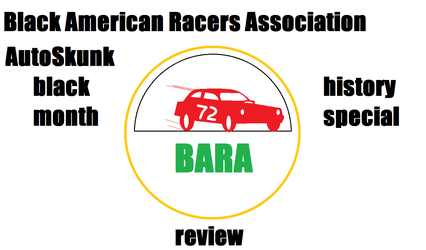 AutoSkunk: check it out Kent, isn't this great or what?

Kent Fox: eh, what's soo great about this?, it's too hot here, I'm sweating like a dog here

AutoSkunk: you'll get used to it, just look at some of the fennecs

Kent Fox: they're made for this kind of eviroment hmph

AutoSkunk: oh come on Kent you're gonna love what I have to show you

Kent Fox: did we really have to travel halfway across the world to see whatever it is you're wanting to show me?

AutoSkunk: yes, because you can only find this kind of car in Isreal, well except for maybe a few examples that were imported to the United States

Kent Fox: uuhh, was that camel eating the car?

AutoSkunk: yeah, I don't what it is with camels and fiberglass and why they like it so much?, they like to eat that stuff

Kent Fox: but I thought that was pure folklore

AutoSkunk: I thought so too but these camels always seem to prove me wrong

Kent Fox: soo what is it?

Kent Fox: I can see that it's an automobile or car but what is it?

AutoSkunk: no seriously that's actually what this car is called, it's called an Autocar

Kent Fox: sure but what's it called!?

AutoSkunk: oh for fuck sake the name is right there!!

Kent Fox: well fuck you I'm out of here, hmph!

Kent Fox: hey uh, okay I just did some research at a library and even talked with a fellow car enthusiast who is a local here and he helped me to look up the name of that car and he was able help me confirm it was called Autocar, so I apologize for earlier and no hard feelings?

Kent Fox: who the hell names their car company Autocar?, that's a stupid unimaginable name to call a car

AutoSkunk: well Kent, I'm not the guy who created the brand so I'll never know or understand

Kent Fox: so I'm assuming we're going to do a review on this car?

AutoSkunk: actually the brand as a whole

Kent Fox: oh, well when do you want to start?

AutoSkunk: right now, this is...SLAP! will you cut that out!

AutoSkunk: the story of Autocar

their story starts in 1957 when the car maker first opened it's doors, they were israel's first car maker (though there was an earlier car maker in Israel called Kaiser-Frazer but they assembled American cars, they weren't genuinely a domestic car maker that made their own cars for the Israeli market, so they don't count).
Autocars Co. Ltd (that's their full name) you could probably say was the only car maker (at least as far as I know) that made their entire model line from fiberglass, that's right I'm not kidding, every car they built was made with a fiberglass body so there was absolutely no chance at all those car bodies to rust though it's rumored or in fact considered folklore that there was one problem fiberglass cars in Israel faced but is yet to be confirmed true or at least as for I'm told...

what is it with these camels and their edible love for fiberglass?
these cars were made popular through the 1960's and 70's, mainly because the Israeli government were forced to buy them.
Autocars released onto the market thousands of low priced second hand cars.
while the styling of some of their cars were a little on the bland side as far as styling goes, the Ford and Truimph engines the comany used to power their cars made them reliable and retained their value for years.
by the 1980's Autocars ceased production of their vehicles and company went out of business, today Israel's only remaining domestic car maker is AIL (Israeli Automotive Industries Limited) a company that's both a carmaker and a major supplier for Israeli security forces.
yes I know this review is perhaps waay too short, the shortest review I've ever written but it's not gonna stop here, I've yet to talk about some of the models they did during their entire lifespan.
one thing I haven't mentioned yet but will now, Autocars had all of their models manufactured under different name though, Sabra.
they chose the name Sabra because in Hebrew Sabra has two different meanings, Sabra means "born in Israel", and "cactus", fittingly enough to the name, Autocars chose a cactus as the logo for their Sabra cars.
now let's get to the models they produced.
we'll start with the models they made for the Israeli market.

first one on the list is the Sussita (or the Cube as it was known because of it's cube like shape), this model was produced from 1960 to 1966 with help from British car maker (Reliant), they came in 2 door wagon and pick up truck versions and were made using various Ford parts (mainly parts from the engine of the Ford Anglia).

next model is the Carmel, it was virtually a clone of the three wheeled Reliant Regal that was modified to accomadate four wheels.
the car was not successful due to reliability problems and was discontinued shortly after.
the Carmel though was later given to next generation of Sussita sedans.

another Sussita model came along called the Sussita 12, manufactured from 1964 to 1970, four different versions were available and had designated names to identify them, a two door station wagon (Carmel), a two door sedan (also Carmel), a four door sedan (Gilboa), and a pickup truck (this one has no designated name).
up until 1968, they were powered by Ford Anglia engines while the Gilboa versions had an optional 1500cc version of a Ford engine.
from 1968 to 1970, the Carmel and Gilboa models powered by the Triumph Herald engine.

next model in the line up is the Sussita 13/60, this model was produced from 1970 to 1975.
it came in three versions, a two door station wagon, two door sedan (known as Carmel Ducas), and a pick up truck, there was four door sedan as an option this time around.
they were built on the chassis of the Triumph Herald and used the Herald's engine and gearbox.

Autocars would produced several more models for other manufacturers using kits borrowed from them, here's some examples below:

Hino Contesa 900/Hino Contesa 1300: these were Japanese cars originally assembled from kits recieved from Hino Japan.
the franchise that was to assemble the Contesa (Ellin) moved in 1969 to Autocars after the Israeli goverment forces the merger of the two companies.
the contract was eventually discontinued when Toyota took over Hino and Autocars went into bankruptcy in 1970 and it's assembely lines were bought by Rom Carmel Industries.
Rom Carmel continued to manufacture the Sussita 13/60 until 1975 and manufactured their own models (the Ron Carmel 1300, and 1301) until 1980.

getting back to Sabra cars (Autocars) the last model in their line up was a roadster, it's just called a Sabra, for some reason they never named their roadster model, of all the Sabras that Autocars made, this one is by far the most beautiful to look at.
in 1960, a man named Yitzhak Shubinsky launched the israeli automobile at the New York Autoshow, it was a small pick up truck that was powered by an nderpowered engine, the truck was not a success.
at the autoshow, Shubinsky realized it was a futile attempt and decided to begin work on a new model.
he bought the rights to use a body made by a British coach builder called Ashley, the same coach builder that built bodies and chassis for mass produced vehicles such as the Austin Healey Sprite and the Jaguar E-Type, the Ashley body was fitted on a Leslie Ballamy Chassis.
he reached an agreement with Reliant (the same company that helped produce the Carmeland the Sussita) to combine the engine, body, and chassis, and turn it into a sportscar, the power plant for the roadster is the same as used in Autocar's previous models, a 1703cc Ford engine.
Reliant was authorized to import the irst one hundred roadsters to the United States.
in 1961 at the New York Autoshow, the first Sabras were introduced, Reliant produced the first 100 cars with their VIN plates marked "AUTOCARS COMPANY LIMITED HAIFA ISRAEL", while the VIN plates say Haifa Israel, in reality, they were manufactured in the United Kingdom.
after the first 100 of them were produced, production was moved back to Israel where the rest of the roadsters were produced but only forty one more of these were imported to the U.S.
in 1963, out of all them, only one was used in motor racing and entered only one race, the 12 Hours of Sebring in Sebring, Florida, the car never finished and had to be pulled out of the race due to drive shaft failure.
between 1964 and 68, 81 cars (a quarter of them Israeli built) were exported to Belgium.
but in June 1967 Israel was arming for war when one of their neighbors, Egypt arming and mobilizing troops for battle and their president, Gamal Abdel Nasser announced that the straights of Tiran would be closed off, this cut off vital shipping lines that lead straight into Israel, the six day war had begun.
Autocars decided to halt Sabra production, but the orders placed prior to the war were respected yet delivery was delayed until 1968 and 69.
globally, over one hundred Sabras are still traceable today with over twenty of them in Belgium.
you can still Sabras for sale online in the United States to this day if you look hard enough and in the right places, just simply looking up Sabras roadster for sale on google alone will give you at least a small handfull of results and they can fetch beefy prices at auction (beetween $40,000 to $80,000 dollars).
but there is one thing that is rumored or in fact is considered folklore in Israel, that being?

it's that, because the cars are from reinforced fiberglass, and camels for some reason find this stuff appetizing, why do they find it appetizing?, well I have absolutely no intention at all to explore the wonders of the ever expanding void that is the camel's mind, so I will never-ever understand why camels find fiberglass appetizing.

AutoSkunk: this is the limit!, I'm gonna show you camels there's gonna be respect for this rare car once and for all!

Kent Fox: well let's look at the bright side, at least the damage is only minor, only seven chew marks along a couple of the fenders

AutoSkunk: you got a point there Kent, I think this could fixed good as new when I get the chance.
oh hold on, that's it for this review, I hope you enjoyed it and I'll see you guys on the next AutoSkunk review :3

Kent Fox: by the way what did happened to those two camels anyways

back at the garage the twocamels were tied up rrrrg, mmph, nngh, struggle

AutoSkunk: so let's not worry about them anymore and just enjoy the drive and admire sights this city has to offer

AutoSkunk: yes we are, why?

Kent Fox: isn't that where a small population of anthro camels live?

AutoSkunk: sure?, why do you ask?, what could civilized domesticated anthro camels do?

suddenbly without warning, a heard of anthro camels come out of nowhere and start nibling away at the Sabra

AutoSkunk: hey!, nooo!, stop it!, stop eating this car!, Kent don't just sit there!, do something!