Clan of the South by SenoraKitty (critique requested) 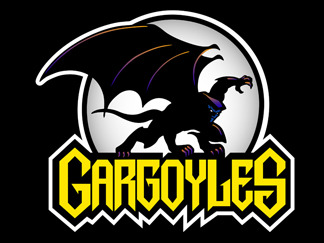 He landed in a darkened alleyway, his wings aching from the amount of gliding he just did. He wasn't tired but his breath sounded loud to his own ears. He kept his eyes to the sky fearing that the one after him would spot his new found hiding place. Then he saw her, the dark winged figure passed right over his head, but did not stop, or show any signs that she was aware of his presence. Still he crouched behind the dumpster to make sure.

He waited there behind the dumpster for a few moments, fearing that the figure would pass overhead again. When she did not he climbed up the side of the building and sat on the edge of the roof top. Scanning the unfamiliar city scape for any signs of his winged pursuer. He heaved a sigh of relief when he saw nothing but deep indigo skies surrounding him.

Hey little fella, what are you doing up here?

The boy jumped and cried out, not expecting to hear anyone up where he was. For a moment he was afraid that he had been caught. In the middle of his surprise he lost his balance, and slid off the side of the roof.

Angela and Broadway gasped as they saw the child fall from the edge of the building. Both ran to save him but stopped in surprise as the boyish figure leaped back over the side of the building, gracefully landing on his talon like feet. Both stared, stunned at the young gargoyle that stood in front of them.

Where did you come from? Angela asked as she observed the orange colored gargoyle child. He didn't look like any of the gargoyles she had met on her journey around the globe.

The boy placed his hands on his hips, proudly announcing, I'm from Florida.

At that moment Brooklyn and Lexington caught up with their fellow clansmen. The two of them landing a step behind Broadway.

Brooklyn was about to ask why Broadway and Angela had landed when he laid his eyes upon the young gargoyle. Uh, what's going on here? Who is this?

Lexington pushed his way past his two rookery brothers to see what all the fuss was about.Whoa. He exclaimed as he caught sight of a gargoyle child, not much smaller then his own stature.

We were flying and we thought we saw a human boy sitting on the edge of the roof. Angela explained, we were afraid that he might get hurt so we landed to see what was going on.

All of the older gargoyles stared at the younger one in wonder, and confusion. Just where had this young gargoyle come from. He said he was from Florida, but how did he get to Manhattan? In unison all of them began to ask these questions, only pausing when the boy balked from the bombardment.

Um, I'll answer your questions. He looked around nervously, hoping that the ruckus hadn't caught the eye of his pursuer. Can we do this somewhere else?

The older gargoyles all looked at one another.

Down in the alley they all huddled together to hear what the gargoyle child had to say. Brooklyn broke the long silence, after hearing the boy's story. So your name is Sunny.

And you took a train from Florida to get all the way up here? Broadway asked, still confused on how such a young gargoyle could travel such a long way.

Who is this gargoyle that is after you? Angela asked, getting a bad feeling in the pit of her stomach.

She's evil! She's been after me ever since I managed to hop on the train. It's like she is determined to catch me and drag me back with her! Sunny blurted out, his face turning a light shade of peach as he paled in fear.

Demona. Brooklyn thought out loud, confirming Angela's fear. From the young gargoyle's description the one who was after him was indeed none other then their long time enemy.

Angela shook her head, but why would she be after a child? To her it just did not make sense. Her mother was misguided, and dangerous, but she simply could not see her wanting to cause harm to an innocent child. Especially not a gargoyle child.

Just then a dark shadow flew overhead putting all of them on alert. It's her! Sunny cried out trying to hide himself in Angela's arms. The others took up a defensive position around the female and child gargoyles in anticipation of an attack.

A long sinister shadow was cast over them as a figure appeared at the front of the alley. Ferocious glowing red eyes peered at them from the figure's head, hands were clawed and baring sharp talons at either side of the shadowy form. There you are!

At the sound of the unfamiliar voice the older gargoyles were instantly confused. They looked at each other, not knowing what to do.

Sunny peeked out from Angela's chest, glancing over her protective arms. Worse. It's my sister!

Sister? They all exclaimed in unison.

Stepping out from the shadows, cast by the lights on the open end of the alley, a violet skinned gargoyle stood before the Manhattan gargoyles.

Sunny's sister wasted no time, and furiously stormed over to her younger brother.You're in big trouble young man. Get over here right this minute! Completely ignoring the presence of the other gargoyles she grabbed Sunny by the arm and proceeded to pull him out of the alley. We're going home right now!

Ow, hey... Sunny whined in protest as he was pulled off to the side by his older sister. Dawn, wait a minute!

The Manhattan gargoyles all shared a look of surprise and utter confusion. Not a single one understanding what was going on.

Brooklyn found three sets of eyes looking to him. What? He shrugged, not knowing what the looks were for. Then it dawned on him. He was the second in command after all. Oh. He heaved a sigh rolling his eyes. Right... Marching over to the two gargoyle siblings he called out to them. Hang on a moment. Dawn was it?

Dawn and Sunny both paused a moment in their argument to glance at the white haired gargoyle. The older gargoyle blinked as if finally noticing the other clan for the first time. Yes?

He paused suddenly not quite sure what to say now that he had their attention. Uh, listen it's almost sunrise. If you're going to head to the nearest train station you're not going to make it by then. He glanced over his shoulder to find his clansmen eagerly gesturing for him to continue. We're on our way back to the castle. If the two of you would like you can spend the day there, and head out to the train station tomorrow night.

A castle? Yeah! Sunny smiled excitedly looking up at his sister. Come on Dawn, it'll be fun.

Dawn went quiet, clearly uneasy about the whole situation. What the red gargoyle said was true, no matter how fast the wind could carry them she and her younger brother would never make it to the train station in time for sun up. ...All right, the blonde gargoyle agreed. She gave her little brother a stern look, but only for today.

In flight on their way back to the Wyvern castle, atop Xanatos's building, it accrued to Dawn that she did not know the the strange gargoyles who had found her younger brother for her. So what are your names?

The light lavender girl gargoyle was the first one to introduce herself and the others. I'm Angela, and this is Broadway. She pointed to her closest friend, and the largest of the group. Lexington, she pointed to her left to the smaller gargoyle. And Brooklyn, she nodded to the front of the group to the one who had convinced Dawn and her brother to join them.

Dawn nodded, looking around at the others so that she could remember their names and features. I'm Dawn, and this is my baby brother Sunny. As if on cue her brother shot them all a bright toothy smile.

Brooklyn called back to the two new gargoyles. Were here.

Woah! Sunny exclaimed excitedly as they came in sight of the largest sky scraper he had ever seen.

Circling up the largest of the towers they saw two older gargoyles, and their pet standing on a walk way as if they were expecting them. The six young gargoyles dove and landed at Goliath, and Hudson's feet.

You're back, Hudson observed as he saw the younger gargoyles come in to land. He blinked noticing that there were more then usual. And with company it would seem.

Who are your new friends, Goliath asked.

Brooklyn ushered the two new gargoyles to the front to meet their leader, and Hudson. Goliath, this is Dawn and her kid brother Sunny. Their from out of town.

Goliath gave the two young gargoyles a look over and glanced to Brooklyn. You realize you're going to have to explain this later.

Dawn stepped forward and offered her hand to the obvious leader of the group. I promise you that we'll explain everything tonight, Goliath.

Goliath grasped the young gargoyle's forearm in an old kindred handshake. Then I take it you will be spending the day with us. Letting go of the younger gargoyle's arm he turned his large back to the group and called back to them. Come, the sun will be rising very soon.

Dawn nodded, and slowly released Goliath's large arm, surprised at the strength in his grip. Turning to her little brother she caught him giving her one of his mischievous grins.

You're drooling! Sunny teased in a sing song tone.

Shut up! Dawn nearly shrieked and turned, storming off in the same direction the others were headed.

Welcome to Manhattan lass. Hudson greeted Dawn with a warm smile as he passed the violet gargoyle on the way to his own stone pedestal.

Thank you, Sir. She smiled nervously to the old war torn gargoyle a deep blush still gracing her cheeks from her brother's embarrassing words.

The name's Hudson. The old gargoyle corrected. Now very proud to have that name.

She nodded, making note of his name. Thank you, Hudson.

Leaping up on the nearest stone platform, Dawn was suddenly very weary. Grateful to have her younger brother back safe and sound, but very unsure and uneasy about what may come next. She cast her gaze across the skyline of New York City, amazed at how much could fit on such a small island. After having met the other gargoyles, the city didn't feel quite as cold and unforgiving as it had when she first arrived.

One by one each of the gargoyles took up a fierce pose. The bright warm light of the sun slowly crept over their bodies turning their flesh to hardened stone. 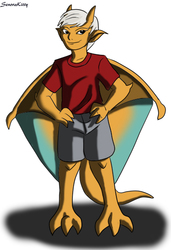 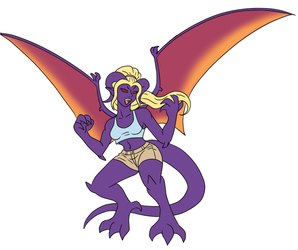 Clan of the South (critique requested)

A story set after the end of the Goliath Saga.